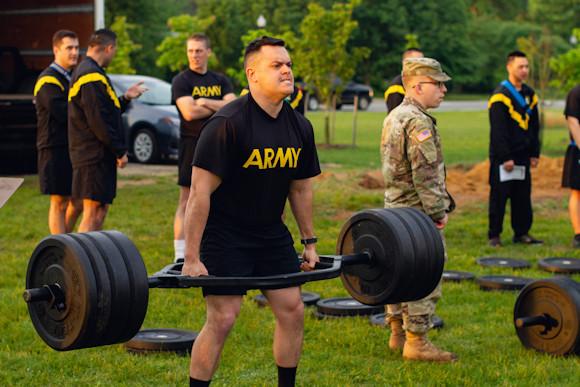 The US Army recently enacted, on your site, the new doctrinal publication on the physical conditioning of US soldiers.

The "revolutionary" approach in the context of Field Manual (FM) 7-22, first with the name Physical Readiness Training (PRT) and today with theHolistic Health and Fitness (H2F), integrates the holistic view with the aim of preventing injury, increasing the lethality of the soldier and being an essential component of individual readiness.

Developed byUS Army Center for Initial Military Training, led by General Lonnie G. Hibbard, the H2F is the conceptual basis through which it is possible to prepare to face the tests of military physical efficiency, Army Combat Fitness Test (ACFT).

Stop to mass training: The single soldier in the center

The innovation in the traditional organization and conduct of the training and development system of physical capabilities lies in the greater attention to the soldier as an individual, to the endogenous and exogenous characteristics that determine his performance in combat or, more generally, throughout its cycle of use.

The lessons learned over the last decade have highlighted the need to create a sort of “culture of fitness”, Put into practice on a daily basis, regardless of where you are and the equipment available, therefore with particular reference to operating theaters. 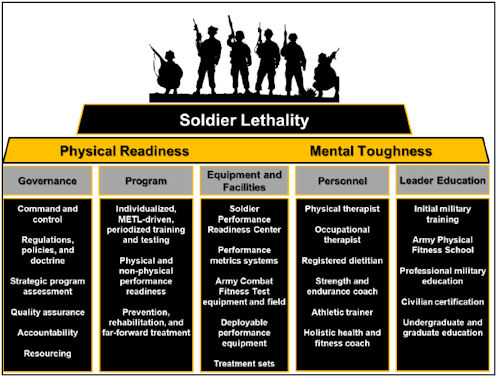 The phases proposed by H2F for conditioning are as simple as they are functional:

The H2F system: principles and elements

It is precisely at the level of the Great Unit that the H2F system develops, aimed both at physical readiness and on the mental and moral factor, based on five critical elements: governance, program, personnel, equipment and facilities, leader education.

To understand how this is a real revolution, it is enough to start from the first three of the critical elements (governance, program, personnel) and note the implementations that the H2F system suggests to the brigade-level unit structure. Commanders at the lower levels will be assisted by subject matter experts who will advise how to implement the doctrine that supports the H2F system. 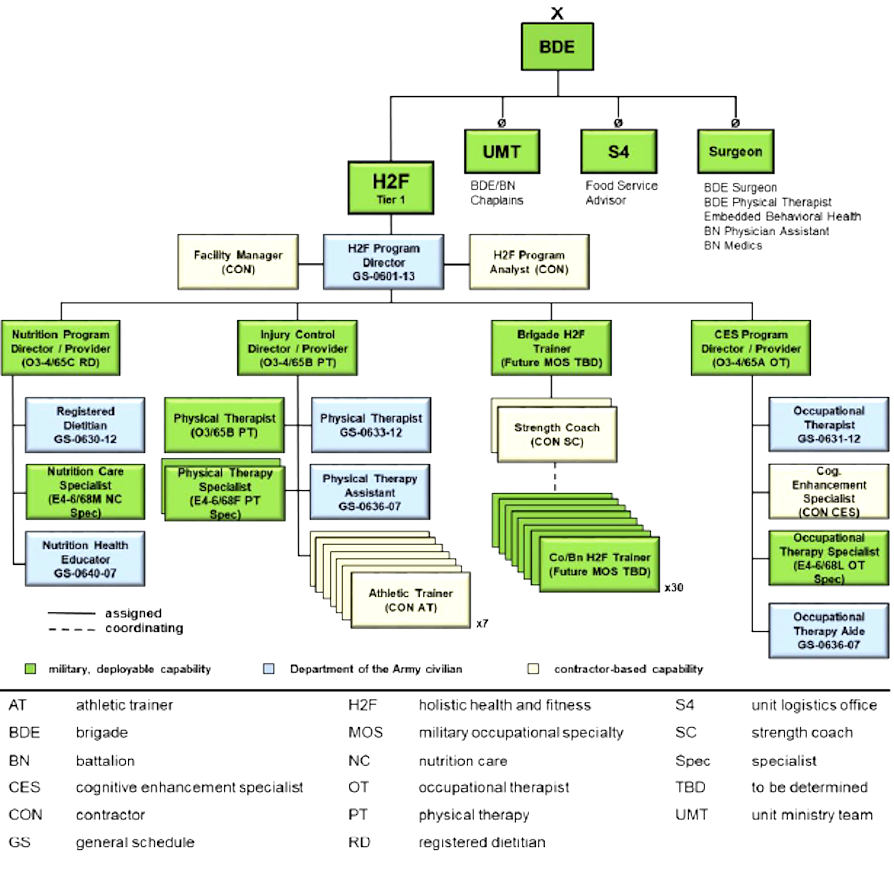 These H2F Performance Team, made up of physiotherapists, diet and nutrition experts, therapists, certified athletic trainers, cognitive performance experts and strength and conditioning coaches, will support the battalions employed by the Brigades, providing state-of-the-art medical care and performance skills.

The element equipment and facilities has certainly played an important role in this evolution, facilitated by the wide availability of budget compared to other nations of the same Atlantic Alliance. The H2F suggests an ideal configuration of the training areas available starting from the single soldier up to company level units.

In conclusion, particular attention was paid to the last of the five critical elements: the formation of leaders. He is the real key figure of the whole H2F system, so much so that he is already mentioned in the preface with the phrase "all leaders are trainers", A concept widely consolidated in all armies: 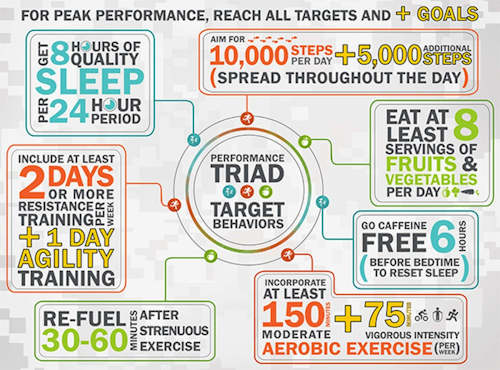 The goal: to prevent injuries and increase lethality

What is the reason that prompted the US Army to invest so much to make changes in the organic tables of the Great Units? The numbers declared by General Hibbard himself1 are explanatory: as of February 2019, more than 56.000 soldiers were not deployable, comparable to more than 13 brigades (!), 21.000 soldiers were partially eligible for employment and more than 15.000 totally unsuitable.

Furthermore, the data collected in 2018 show that more than half of all soldiers have been injured at least once and that 71% of these injuries were musculoskeletal and micro-traumatic “overuse” injuries of the lower limbs.

In addition to injuries caused by "normal employment", the same report denounced that over 12% of soldiers had some form of sleep disorder and 17% of soldiers on active duty were obese, the latter a problem that actually plagues. 42.4% of the US population2.

Unhealthy training methods, eating habits and lifestyle inevitably lead to results such as those now reported and turn into enormous costs for health care and the lack of staff. In short, a profound impact on operational readiness and on spending dedicated to the defense sector.

The H2F was therefore developed to increase the overall effectiveness of the army and address the various problems that have affected the various US armed forces (and more generally the Western ones), in a complementary way to existing programs such as Triad performance, Go for Green and the programs suggested byArmy Wellness Centers. 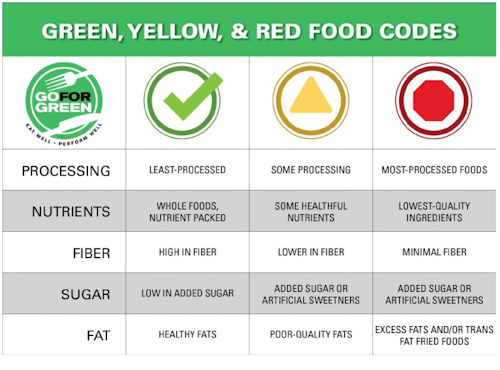 In the Contemporary Operating Environment, the military belonging to NATO forces have been subject, for over 30 years, to an ever greater projection and readiness, towards any type of physical environment and for the conduct of a vast range even simultaneous operations (from combat to counter-insurgency to assistance to foreign security forces).

This evolution of conflicts has forced nations and international organizations to continuously update at the organizational, technological and doctrinal level, from the strategic political to the tactical level.

As for structural innovations at lower order levels, it is quite easy to fall into the banal idea that all military personnel are part of exclusively combat and the creation of professional figures in particular and innovative sectors is a waste of resources. Indeed, the diversification of work is an essential process of development, in all fields, and the creation of specialized figures within the units enriches that level of professionalism towards which the armed forces of the Atlantic Alliance have been addressing for over 20 years.

But what is the situation in Italy? As previously stated, the United States shares much of the economic, social and military issues with its European allies, so the starting point is, in a proportionate way, somewhat similar.

The last Army directive on physical education dates back to 2010, while that on physical tests in 2014, based on the concept of 3 events3 like the US one before the publication in 2018 of the Army Combat Fitness Test (ACFT), consisting of the most complete 6 events4 and with relative evaluation table instead of simple suitability. 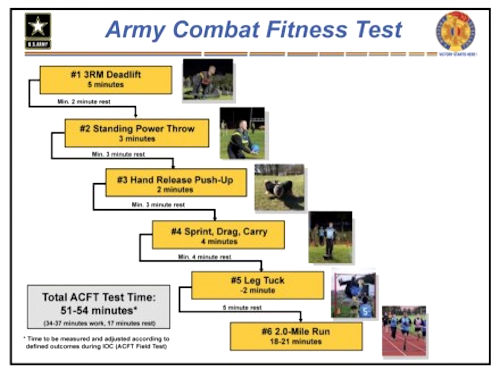 The introduction of training in the Military Combat Method (MCM), promoted by the FOLGORE Paratroopers Brigade, has made it possible to bridge the gap between the two Armies in terms of doctrinal updating through physical conditioning promoted by the preparation manual for access to the Instructor course.

If we consider separately the proposed phases of H2F, in particular the initial one, the training institutes of the Italian Army have for some time provided teams of specialized instructors. This staff often comes from the excellence of sports groups, with experience at the Olympic level, and contributes greatly to the process of preparing recruits and students through the most profitable approach of functional training.

Particular attention must be paid to the need to separate sports preparation and that aimed at combat. The soldier, unlike the sportsman, when employed is not sure what he will be able to eat, how much he will be able to sleep, how long he will be subjected to stress of any kind and, above all, if his unit will be able to fulfill its mission and return to base. Consequently, the soldier needs a conditioning that guarantees him to be widely operational even in non-optimal conditions and to do this it is necessary to integrate traditional training methods.

As for the maintenance activity in the departments, the development of a technical and specific doctrine could be an opportunity to address those common problems already mentioned. The culture of fitness as a measure to reduce the incidence of accidents, physical wear and tear of personnel (avoiding periods of unavailability for medical reasons) and as a tool for optimizing the forces available, it has been a known concept for years, not only in the military field. It is probably an investment to be made as soon as possible to get the right benefit.

4 Deadlifts from the ground; shot put from a standstill; push-ups on the arms; 250m of sprint, drag and weight transport; leg flexion.

The American military device, in recent years, is undergoing a profound restructuring in order to face ...
1502
Read

The fast multi-role vessel Project 02510 entered service on November 24 with the Baltic Fleet of the ...
1899
Read

The IRINI mission - launched last year by the European Union to support the UN embargo, aimed at blocking the ...
3382
Read

The hull of the icebreaker ship Evpatiy Kolovrat, the class leader of Project 21180M, was set up at Almaz ...
841
Read

Only 5 years ago the Turkish press was promoting the new ALTAY national battle tank as the most modern MBT in existence ...
3591
Read

According to a press release released on November 23, 2020, Huntington Ingalls Industries Shipyards have ...
989
Read

After 48 years to protect the skies of Japan on November 20 they were officially withdrawn from service ...
1468
Read