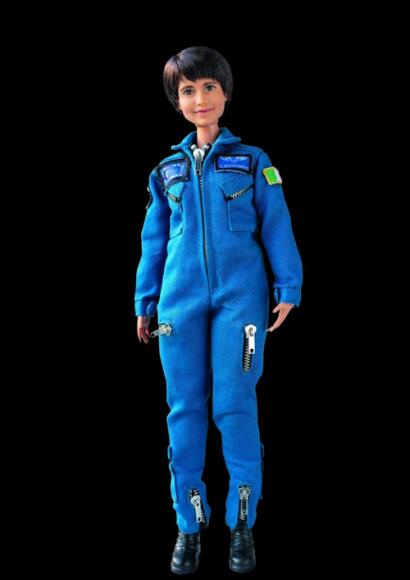 On the occasion of the 60th anniversary of the birth of the usual game for girls Barbie, Mattel (through a series of one-off dolls, inspired by heroines of our time who have helped to break the mold), has dedicated, that of "Woman and Science ", to Samantha Cristoforetti, the first Italian woman in the crews of the European Space Agency and who, in 2014, carried out a series of scientific experiments on board the international space station.

Cristoforetti received her prototype on 11 October, on the day dedicated to girls by the United Nations.

"I hope you inspire the girls to understand that they have to dream without setting any necessary limits. It is significant for a Barbie doll to represent a woman of Science" he commented.

Classe1977, military, aviatrix, astronaut and Italian engineer, with the ISS Expedition 42 / Expedition 43 Futura mission of the 2014-2015 has achieved the European record and the female record of stay in space in a single flight (199 days), the latter passed in September 2017 by the American Peggy Whitson. An asteroid called also was dedicated to Cristoforetti 15006 Samcristoforetti, discovered already in the 1998.

The supplies of military equipment by NATO and European countries to fighters continue in these days ...
10415
Read

The surprise attack of Bilohorivka will remain in the history of the Russian aggression war on Ukraine on the list ...
39283
Read

Some countries of the former Eastern Bloc have announced that they intend to sell their MBT holdings to Ukraine in order to ...
32051
Read

A few days ago we published in rapid succession the first and second part of an analysis relating to ...
119358
Read

The escalation of military supplies by NATO continues in Kiev. In recent weeks, Ukrainian requests ...
87627
Read

The interview released by the Russian Foreign Minister Sergej Lavrov on the evening of May 1 strongly relaunched the ...
5538
Read

Since the start of the Special Operation, the Kiev Air Force has suffered heavy losses. It would seem that the Russians ...
34481
Read

We have already spoken extensively in the first part of this analysis of Ukraine and its situation; now is...
34643
Read

After having spoken extensively in the latest analyzes of the air, naval and land operations that have taken place so far ...
18215
Read

President Zelensky never ceases to urge NATO countries (and not only those) to supply armaments to ...
9340
Read