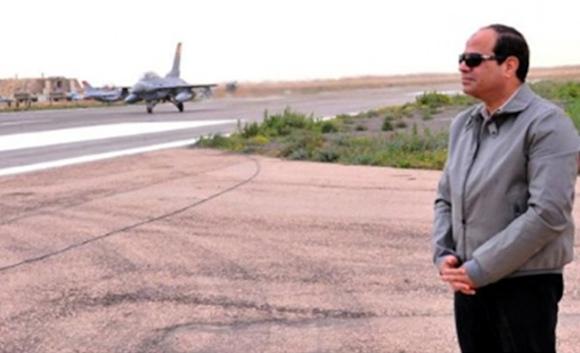 If the Turkish militias, which support al-Sarraj, attack Sirte, the Egyptian armed forces will enter Cyrenaica to support Haftar.

So the escalation that everyone fears could occur within a short time, depends on Ankara's plans: settle for Tripolitania or try to reunite Libya, obviously under the Turkish umbrella.

President al-Sisi said that Egypt will not remain helpless in the face of threats to its strategic security and its western border, especially as military operations near Sirte are intensifying. If we want we can quickly change the situation on the ground. The matter will first be submitted to Parliament (totally controlled by al-Sisi).

However, despite the warlike claims, we would hardly believe that al-Sisi does not fear a military apparatus like the Turkish one, supported by drones and "Syrian" militiamen hardened by years of bloody civil war.

The Egyptian armed forces, in recent years, have suffered many reverses in Sinai fighting against the militants of the Islamic State. In the event of an intervention in Libya, as stated by al-Sisi, other efforts will be needed.

We believe, however, that in the event of an Egyptian intervention, ground troops will hardly be sent, more likely the massive use of aviation, perhaps by inserting detachments of special forces for the final guide of precision ammunition.

So it would be an intervention aimed more at discouraging Ankara's expansionist ambitions to the east, rather than a permanent occupation of Libyan territory.

Ankara does not remain silent in the face of Egyptian threats, in fact the Turkish foreign minister has ruled that Egyptian intervention, in any form in Libya, will have even worse consequences than Nasser's adventure in Yemen.

On balance, the Italian government is selling two brand new frigates (in addition to helicopters and perhaps hunting Typhoon) to a country that is preparing to attack an array (that of the internationally recognized premier al-Sarraj) which, at least on paper, it should support.

When Ninth raiders arrived in Mogadishu in December 1992 - as part of the operation ...
6576
Read

As reported by the Ukrainian press during the visit to Kiev by the British Defense Secretary ...
1979
Read

Jordan boasts a large armored vehicle fleet, which, however, is strongly dated and despite reports ...
2236
Read

From the postwar period to today, the Italian Armed Forces, at least in the conventional components, have always adopted weapons ...
4126
Read

On 22 June 1897, the diamond jubilee of Queen Victoria was celebrated in London, the longest-lived sovereign that ...
4071
Read

The Royal Air Force's first Typhoon, serial number ZJ914, was recoloured at Coningsby RAF base with the ...
3359
Read

If we wanted to find the major similarities between Italian governments in recent decades, we would find that, although ...
2640
Read

According to reports from many Asian media, Islamabad's top government spheres have leaked ...
2829
Read

According to Commodore Gabriel Eduardo Attis, commander of the Atlantic Naval Area and inspector of the ...
2713
Read

The negotiations between the Governments of Paris and Athens concerning the purchase by Polemiki Aeroporia of 18 aircraft of 4 ...
3285
Read