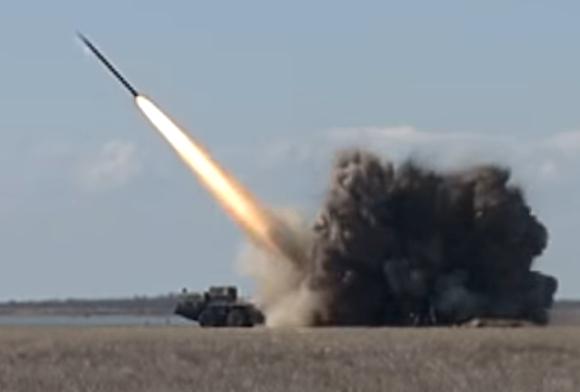 According to various sources in the MENA (Middle East and North Africa) area, the Cairo armed forces are in talks with the Ukrainian company KPB Luch for the purchase of the 300mm multiple missile launcher system. Vilkha M.

This weapon system that entered service with the Ukrainian armed forces in 2019 immediately attracted interest abroad (Azerbaijan, Algeria, Kuwait, Turkmenistan) without, however, or at least until now, receiving any formal request.

Il Vilkha M it is a derivative of the Soviet heavy rocket launcher BM-30 Smerch, carries a crew of four and can fire 800kg (170kg explosives) single-shot or salvo missiles up to a range of 130km. Each system is equipped with 12 missiles R624M which can be launched totally in 45 seconds hitting the target with a margin of error of less than 15 meters thanks to the maneuverability provided by 90 small rockets.

The missile R624M has both an inertial and GNSS enabled guidance system in order to avoid the risk of signal loss in the presence of disturbing devices, furthermore with the introduction of the laser-guided kit it can be conducted on the target guided by a drone operating in the area , in the Ukrainian case from TB 2 Bayraktar, while in Egypt it could be the Wing Loong.

Il Vilkha M, after the successful tests conducted at the end of March 2020 in the Odessa region, it can be considered one of the most important indigenous weapon systems developed and produced by Kiev following the occupation of Crimea and the conflict in the Donbass region alongside the missile anti-ship Neptune and short-range ballistic missile (SRBM) Hrim 2.

Il Vilkha M if actually purchased from Egypt it will fit into its variegated arsenal alongside the US system M270 and the native version on a wheeled vehicle Sakr-45, as well as short-range ballistic missiles Sakr-80 (FROG-7), Hwasong-6 e Project T (SCUD).

This article presents technical, specific and "real life" information thanks to the collaboration of a former ...
22031
Read

Over the past twenty years, the US Special Forces (and beyond) have trained and operated in a context ...
6680
Read

The multinational exercise Bison Counter 24 was held in Sardinia from 5 October to 2021 November. Numerous Teams ...
2579
Read

“You are not a special department just because you have a glorious, epic past, nor is the adjective special enough ...
15177
Read

Born in Milan shortly after the end of the First World War, the National Autieri of Italy Association has ...
1105
Read

During the last operations in Afghanistan, Iraq and Syria the American forces, both conventional and special, ...
4108
Read

The United States is increasingly concentrating strategic resources in the South Pacific. It is certainly not a secret ...
4327
Read

During the visit to COMSUBIN we had the opportunity to interview the commander of the Underwater Group of ...
4018
Read

The news of the creation within the CIA of a department dedicated to China1 did not surprise the ...
7057
Read