Home Military world The Infantry Weapon: the Queen of all ...

The Infantry Weapon: the Queen of all battles - Third episode: "the captain's day ends"

We have arrived at the last episode of the long story of "our captain". Three scheduled episodes that inevitably suffered from the succession of news from Ukraine.

The last episode of the story anticipates the most important month for the Queen of all Battles, that is May, where on the day of the 24th the Italian Infantry Army Festival is celebrated.

It is a bit difficult to talk about a party at this moment, but it is still an occasion to remember the victims of the Infantry, underlining that it is our soldiers who are engaged in the conflicts decided by those who do not wear the stars and perhaps he never wore them.

Who is the captain?

Certainly a reliable, highly decorated and capable general of the army corps (now on leave). I tried several times to ask him if I could refer to his role and his name, but as befits certain questions posed to the military world, my requests were reciprocated by a sort of dissuasive vagueness. I wondered why and made a few more attempts, but nothing to do. The captain, who you have now understood to be a general, speaks very quickly in military terms to which I admit it is not easy to keep up with. However, being a nice toscanaccio in the DNA he was able to find examples able to dissolve my misunderstandings. Then I caught the general's subtle irony, coming to the conclusion that he is the philosophical basis of the Infantry officer.

The most beautiful and historical conclusion imprinted on a stone of the Redipuglia Memorial, as well as at the entrance of the 80th infantry Rome: “What do you care about my name? Shout to the wind: Infantryman of Italy! and I'll sleep happy ". 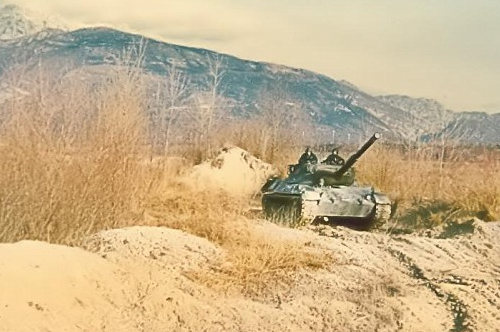 The rifle squads begin the rush towards the enemy positions. The men alternate fire and movement: the pairs of riflemen get up, run in a zigzag for three seconds then go to the ground and roll a little to the right and a little to the left as the machine guns fire. Then the couples on the ground open fire while the gunners do the same movement. The fusiliers are on the red line.

The Biber bridge is ready, the lieutenant commanding the wagon unit communicates. The captain scrolls the codenames on the table to give the order to the anti-tank platoon to move the fire to the T-72s and the Leopards to cross the moat to engage the BMP-1 closely.

The riflemen are about twenty meters from the enemy positions. They snap bayonets onto rifles. In the din you can clearly hear the "bomb" scream with which the platoon commanders order the simultaneous launch of hand grenades. As soon as it explodes, the men jump to their feet and run firing at the enemy positions.

The VTCs of the backup platoon are the first to cross the moat by passing over the bridge launched by the Biber, followed by those of the advanced platoons who penetrate the enemy stronghold to re-embark the rifle squads which, having ended the assault in the meantime, are carrying out the round-up.

The squads proceed cautiously, flanked by the anti-tank platoon on the right and the Leopards on the left. The backup platoon advances in depth with a wedge formation and the VTC after 500 meters lower the ramps without stopping.

The riflemen jump out and, proceeding in jerks, approach the positions of the M-1943s that attack with the same procedures as the advanced platoons.

The captain aboard the VTC followed all the actions closely. The radio operator passes the microphone of the radio connected to the logistic rate and pronounces the code which means "reach the new deployment base". The backup platoon concludes the assault and begins the round-up.

The captain asks the commanders by radio for the codified report on: losses, injuries, damage to vehicles, consumption of ammunition and fuel. 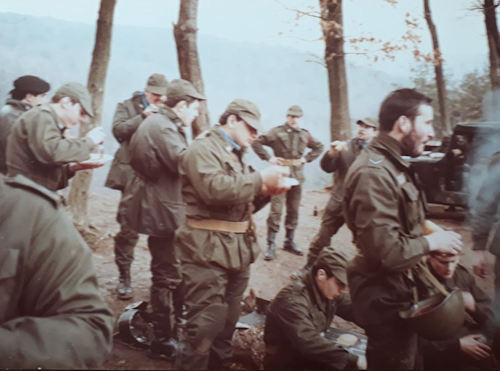 There is a rifleman standing to report an unexploded hand grenade. The means of the logistic rate are arriving with ammunition, the two tankers for the supply of diesel and petrol and the trucks with field kitchens. Maybe you will be able to have a hot meal after the K-ration days.

A soldier from the right-wing forward platoon, who sprained his ankle when jumping out of the VTC, is transported on a makeshift stretcher to the ambulance that has reached the minor complex. The captain approaches to cheer him up. The medical lieutenant says it's just a sprain, he'll be well soon. He is the only casualty of the mechanized minor complex fire drill in the attack.

The wooden and cardboard shapes that represented the positions and the defenders are all perforated. The silhouettes of the tracked and armored vehicles have disappeared, shattered into a thousand pieces blackened by the fire.

The team responsible for the task, assigned in rotation, collects all the wood and cardboard debris that are locked up in plastic bags and taken back to the barracks.

The captain looks around, satisfied: a day of fire training of the Infantry has ended in the Cellina - Meduna shooting range, province of Pordenone, Friuli Venezia Giulia.

The Infantry Weapon: the Queen of all battles - First episode: "the captain"

The Infantry Weapon: the Queen of all battles - Second episode: "mechanized minor complex"

A Pakistani court has summoned the heads of all past and current governments, including the former military governor ...
363
Read

The experience gained on the ground, in the last two decades, by the Italian military personnel engaged in the missions ...
12734
Read

After the decommissioning of the M551 Sheridan tank, which took place in the mid-90s of the last century, the US Army ...
16378
Read

The director of the Kredmash mechanical plant in Kremenchuk would have confirmed (source Komsomol'skaja Pravda) that ...
7804
Read