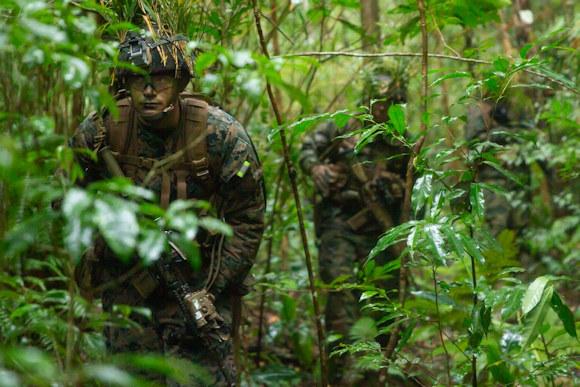 The United States is increasingly concentrating strategic resources in the South Pacific. It is certainly no secret that many military analysts almost certainly give a clash between the only superpower and China, perhaps to save Taiwan from the will of Beijing's annexation (and therefore the production of superconductors, fundamental for Western technology).

The Marine Corps is preparing to face the “new” operational scenario (a return to the “naval” roots), made up of chains of small atolls (some artificial). The disposal of the armored component, in favor of the adoption of missile systems (especially anti-ship), goes hand in hand with the structural changes of the rifle squads and platoons. There Marine Rifle Squadnotably, it saw an update that changed its base composition from 13 Riflemen to 15. In addition to adding two Marines to the squad, their adoption of weapon systems has increased.

The Marines made four changes to the rifle squad's equipment. These changes have increased its firepower and implemented its capabilities in a high-intensity conflict such as the one against China. The goal seems to be to make the single team more autonomous and more capable, in line with the updating of the structure of the Navy Rifle Squad. 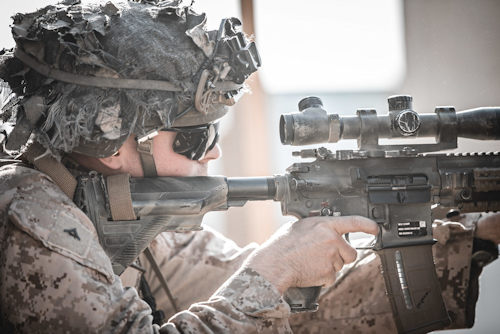 The infantry of the United States Marine Corps has long since adopted the M-27 IAR (Infantry automatically Rifle), deriving from the H & K 416, 5,56x45 mm caliber and 16,5 inch barrel (which allows optimal use of the 77 grain bullet). The original intent was to replace the M-249 SAW, in the same caliber, with a lighter gun that used the same standard magazines as the M-4 and M-16A4 series.

However, the Marine Corps continued to introduce the M-27 IAR (equipped with a bipod), without abandoning the M-249. In fact, among the experts, many doubts had arisen on the possibility of the IAR to also assume the functions of an LMG.

Soon the M-27 will be equipped with a Trijicon LPVO, a 1-8X scope that can greatly improve shooting accuracy, both a corto than long range. In addition, the Marine Corps plans to equip each rifle with sound suppressors which, in addition to significantly reducing the noise produced by the firing, reduces the blaze.

Given the accuracy in shooting at medium distances, the Marines decided to equip the SDMR (Squad Designated Marksman Rifle) with the M-27, in this case called M-38 SDMR (one for Marine Rifle Squad). The main difference between M-27 and M-38 will be the mounting of a more powerful lens. THE experienced shooters equipped with SDMR will use the Leupold TS-30A2 Mark 4 MR / T which provides a magnification range of 2,5-8X. The rifle from expert shooter, placed on the squad, proved to be a valuable asset to the Marines in combat, especially in circumstances where discriminating shooting is required. 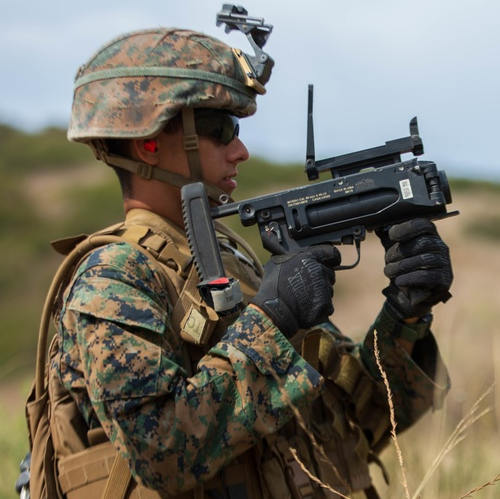 The ability to reach "long" distances (in the order of 500/600 meters) allows the Marine team to extend its range, while having a very precise weapon for a variety of encounters (such as if an ambush were to be made, the M-38 would ensure an accurate first shot).

As for the support weapons, the Marines have abandoned the M-203 single-shot grenade launcher, in favor of the M-320. The latter is a single-shot 40x46mm grenade launcher capable of using a wide range of ammunition, from HEDP (High Explosive Dual Purpose) to smoke and tear gas projectiles. The M320 equips the "grenadiers", a new figure inserted in the Navy Rifle Squad.

Grenadiers on the Marine Rifle Squad will be able to fly a salvo from 40mm to 350m at a target. This capability will allow Marines to engage covered targets and provide fire support even at considerable distances.

The advantages of an autonomous system (unlike the M-203) are manifold. First, it ensures that the rifle is lighter and much easier to use. Equally important: A standalone launcher is much more practical to use than one attached to a shotgun. The conformation of the M-320 also allows for better aiming and faster loading than its predecessor.

The M-3E1 MAAWS (Multipurpose Anti-Armor Weapon System) has been in use for years with the US Army and has proven itself as a capable and easy-to-use recoilless gun. The M-3E1 shoots an 84mm shell with a range of over 800m. every Marine Rifle Squad will have one, in operation anti armored but above all in operation anti bunker e anti staff.

This article presents technical, specific and "real life" information thanks to the collaboration of a former ...
21642
Read

Over the past twenty years, the US Special Forces (and beyond) have trained and operated in a context ...
6656
Read

According to various sources in the MENA (Middle East and North Africa) area, the armed forces of Cairo ...
2378
Read

The multinational exercise Bison Counter 24 was held in Sardinia from 5 October to 2021 November. Numerous Teams ...
2571
Read

“You are not a special department just because you have a glorious, epic past, nor is the adjective special enough ...
15168
Read

During the last operations in Afghanistan, Iraq and Syria the American forces, both conventional and special, ...
4099
Read

During the visit to COMSUBIN we had the opportunity to interview the commander of the Underwater Group of ...
4015
Read

The news of the creation within the CIA of a department dedicated to China1 did not surprise the ...
7055
Read