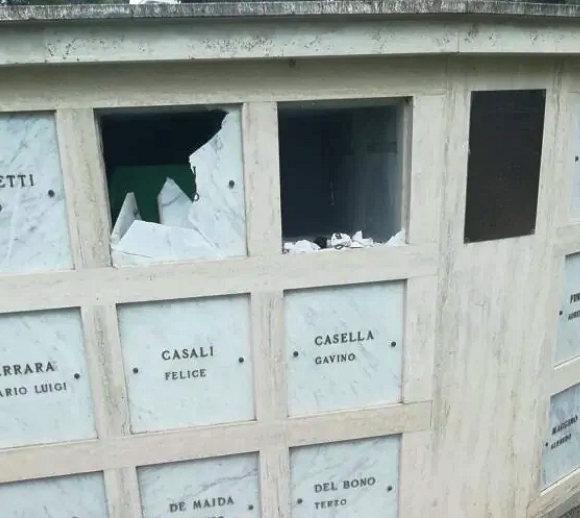 Last night, unknown persons entered the war cemetery of Nettuno, dedicated to the marines of the battalion Barbarigo, and they desecrated two tombs and took away the remains of those who rested there. The judiciary is investigating the episode.

Il Barbarigo was a battalion of the Xᵃ MAS (initially formed under the name of Mistral), reconstituted under the leadership of Commander Junio ​​Valerio Borghese, immediately after the armistice of 8 September. The battalion was structured on a command, 4 rifle companies and a command and services company.

After the armistice, the Xᵃ MAS did not choose Mussolini instead of the king, as the Duce is physically absent, it simply remains true to itself in the institutional vacuum, in the collapse of the national ruling class.

The founding of CSR will be a posthumous event and, in a certain way, its leaders will have to adapt to the agreements that Borghese had previously (and in a completely autonomous way) made with Germany.

The Xᵃ, from a small nucleus of naval specialists, then becomes an organic structure with a certain number of infantry battalions employed.

There is no doubt that those who enlisted in the Xᵃ chose not to follow King Vittorio Emanuele III, in what they considered a serious act of treason. Treason as the capital was abandoned, leaving it at the mercy of the Germans.

This is why last night's desecration appears even more vile, because it was perpetrated against those who, in good faith, chose not to flee, trying to maintain that sense of national unity that today we can only show off in football matches.

For a long time, Difesa Online has emphasized the importance of acquiring (and maintaining) artillery pieces, monotube and ...
7334
Read

British Army Chief of Staff Sir Patrick Sanders says the invasion of Ukraine by the ...
7159
Read

During the last world war the Panzerkampfwagen V Panther, having solved the initial mechanical problems, was ...
25291
Read

The conflict in Ukraine has "distracted" the magazine in recent months from continuing to deal with issues relating to the ...
6847
Read

A few weeks ago we mentioned how serious games (and among them war games) can help to understand ...
1790
Read