The Cavour aircraft carrier certified for the use of F-35Bs 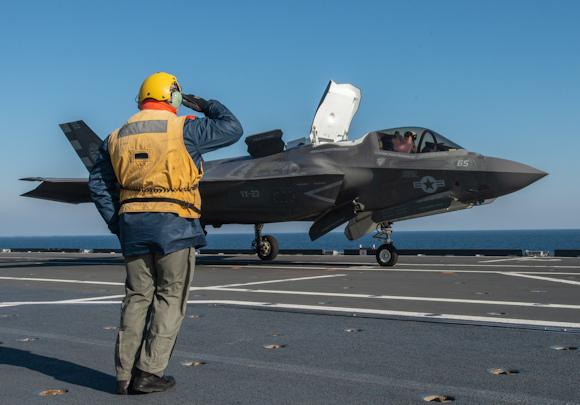 The compatibility tests lasted four weeks, starting with the departure from Norfolk on February 28th and with the first landing of an F-35B on March 1st. During the sea trials, the two F-35Bs of the Pax River ITF (Integrated Test Force) - a group of 180 people including engineers, researchers, test pilots, technicians and bridge operators aboard the Cavour - carried out over 50 missions on board flight, in different weather conditions and sea conditions, a night session, about 120 vertical landings and as many short take-offs with the help of the ski jump, and single vertical take-off tests.

Just to optimize the performance of the new fighter, the aircraft carrier Cavour, presents one ski jump with an angle of 12 ° in order to allow optimal exploitation of the characteristics of STOVL aircraft. 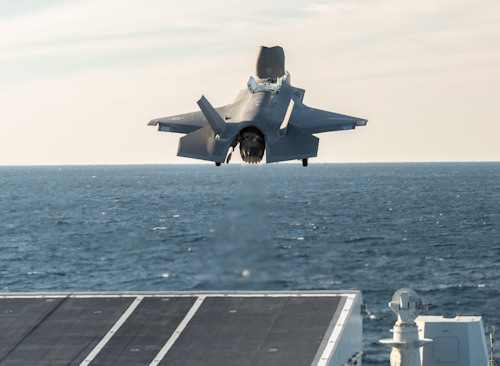 Il Cavour is a flexible naval platform, capable of carrying out a wide range of missions (support for amphibious operations, prevention of international crises, defense of maritime trade routes).

The four LM-2500 turbines develop 120.000 hp, this is the most powerful propulsion system, non-nuclear, installed on a military ship: with all four turbines in operation, the Cavour it can reach the speed of 30 knots.

Once the validation of the new F-35B fighters is completed, the main weapon system of the Cavour it will be its air component, including helicopters (SH-90 and SH-101), capable of operating both in ASuW and ASW function.

As for the defense systems, the aircraft carrier is equipped with two Leonardo cannons Super Quick 76/62 mm (capable of firing ammunition intelligent DART) and 32 cells Sylver A43 for short-range (30 km) surface-to-air missiles Aster-15.

In the case of support to amphibious operations, all types of vehicles supplied to the Projection Force from the Sea can be embarked, including the new heavy busways. Centaur II.

With six take-off / landing spots on the flight deck, the Cavour is able to transport two navy rifle companies to the ground in a short time.

The only perplexity concerns the number of F-35Bs that will be available to the group on board, which would normally be 10 aircraft (plus 12 helicopters). However, the total number of machines available to the Navy will result in an operational yield not exceeding 8/9 aircraft at a time, with little possibility of being able to embark, if necessary, even a small number of F-35Bs on the LHD. Trieste, to support an amphibious operation.

This afternoon, the Ministry of Defense of the Russian Federation issued the following statement: "Two ...
396
Read

The latest news about the movements of Russian troops towards Crimea speak of three regiments of the VDV (Vozdušno -...
5440
Read

The tension between Ukraine and Russia does not seem to be defused, having been engaged for weeks to "flex their muscles" in the ...
4378
Read

The Kirov class nuclear-powered cruiser (Project 11442M) Admiral Nakhimov which has been under construction since 2013 ...
2857
Read

Some operators of the special forces of the Russian Federation, the KSO (Komandovanie sil spetsial'nalnykh operatsii), ...
7384
Read

The Covid 19 health emergency represented a watershed, between the confused and improvised management that more or ...
817
Read