The naval forces of Beijing are investing significant resources to upgrade the construction sites of naval units to be able to simultaneously support the production of the new nuclear attack submarine Type 095 and the ballistic missile submarine Type 096. To do this, important works are underway at the Bohai Shipyard on the island of Hulu, the site of construction of all the nuclear-powered boats of the PLAN, in fact, a commercial satellite has detected the presence at an advanced stage of construction of a plant capable of allow the construction of two boats simultaneously on two different production lines.

These further investments will broaden the production capacities for the expansion of Chinese naval capabilities, which, as highlighted in the US budget article, are of considerable concern to Washington. It should be remembered, in fact, that in 2019 from the main Chinese shipyards (Jiangnan Shipyard Group and Dalian Shipbuilding) ten destroyers were launched (8x Type 052D and 2x Type 055) to which two aircraft carriers must also be added Type 002 and two amphibious ships Type 075. 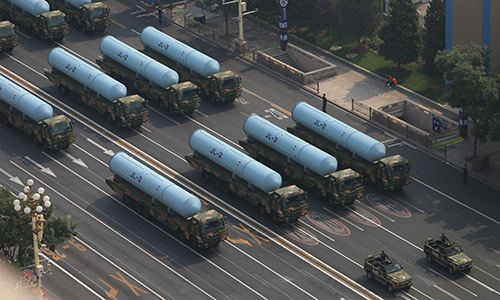 Il Type 096 will go to support the Type 094 (opening photo), but, unlike its predecessors armed with twelve missiles JL-2 (photo), it will be armed with the new third generation ballistic missile JL-3 able to hit a target up to at least 6.500 km, thus constituting the spearhead of the nuclear deterrence of the PLAN Submarine Force, becoming the counterpart of the class Columbia US.

As regards, however, the projection capabilities with conventional weapons the Type 095 will go alongside the previous ones Type 093, with respect to which, however, it presents a significant step forward from the technological point of view, of weapon systems, but above all of fundamental silence to guarantee a constant presence in the areas of strategic interest of Beijing, such as the East China Sea and the 'Indian Ocean, in order to monitor commercial traffic and the possible presence of Carrier Groups operating in the area. The Type 095 is equipped with eight 533mm torpedo tubes armed with torpedoes Yu-8 and sixteen VLSs may be equipped with anti-ship missiles XJ-18, antisom missiles Yu-11, cruise missiles Donghai-10, six missiles are added to these weapons Haihongqi 10 for short range air defense.

For Beijing the Type 095 appears to be a fundamental tool for its naval doctrine and fleet expansion and the expansion of the Bohai Shipyard is aimed precisely at guaranteeing the commissioning of the greatest number of boats in a shorter time that can be opposed to the class , US planned in 66 boats, 19 of which are already in active service.

The American military device, in recent years, is undergoing a profound restructuring in order to face ...
1385
Read

After 48 years to protect the skies of Japan on November 20 they were officially withdrawn from service ...
1463
Read