The Japanese Navy converts destroyers into aircraft carriers. Our? 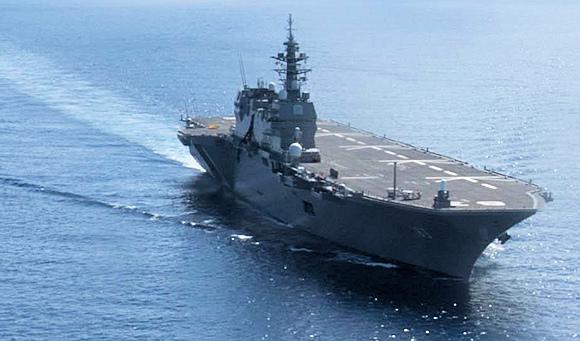 While the European Union "locks" the borders between the member states, to stem the spread of COVID-19, the transhipment activities of migrants to Europe (ie Italy) continue. In fact, the Navy continues to use its most sophisticated units (DORIA fighters and FREMM frigates) to transport probable asylum seekers (escamotage designed by the European Commission to allow access to the Union) in Italian ports.

So we spend huge funds to renew our fleet (and still need it to fill the gaps), acquiring highly technological units and then transforming them into simple ferries.

On the other hand, the Japanese Maritime Defense Force (JMSDF), with the approval of the Mid-Term Defense Program 2019-23, is transforming the destroyers / helicopter carriers of the IZUMO class (photo) into real aircraft carriers, therefore able to embark fighters 5th generation STOVL F-35B.

It would therefore be a purely formal internal limitation, so much so that public opinion seems to support the Shinžo Abe government in this choice, given the growing Chinese interference in the Pacific area.

Precisely in the field of communication we can find some analogies with the Italian situation.

To respect the defensive orientation of the Japanese Armed Forces (the official name is Self Defense Forces), a linguistic device was used to identify the transformation of the IZUMO class units, defining them destroyers with multifunctional capabilities. Just as the Navy had to justify, in the face of Italian public opinion, the acquisition of the TRIESTE amphibious assault unit (LHD), defining it as a naval platform to be used in the event of natural disasters (dual use ship).

Previous to the IZUMO class are the HYUGA class destroyers / helicopter carriers, resulting from the Mid-Term Defense Program 2001-05.

The HYUGA (with a displacement of 19.000 tons at full load) have allowed the Japanese Navy to have units equipped with the standard armament of a fighter but with the all-round versatility of a helicopter carrier. 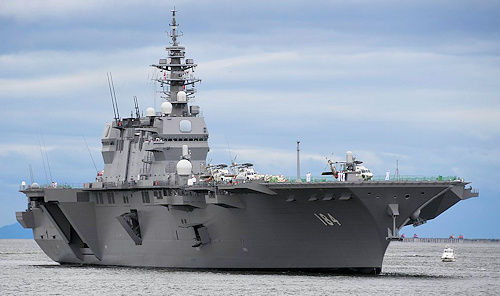 The IZUMO class represents its evolution, made up of the twin units IZUMO and KAGA (photo). 250 meters long, they have a full load displacement of 27.000 tons, driven by an engine consisting of 4 General Electric LM2500IEC gas turbines capable of developing 112.000 HP of power and reaching a speed of 30 knots. The armament consists of two Phalanx systems with a 20mm Vulcan cannon and two launchers for RIM-116 SeaRAM short-range surface-air missiles.

Despite the conversion into an aircraft carrier, the primary task of the units, according to the Ministry of Defense, will be the antisom fight. In fact, the F-35B (for a maximum number of 12) will be embarked only if required by the type of mission to be carried out. The rest of the flight component will mainly consist of ASW SH-60K helicopters, built under license from Mitsubishi. However, given that the Japanese Defense is planning to purchase 42 F-35B (out of a total of 147 aircraft), it is also possible to use it on land bases, thus taking advantage of the island conformation of the Japanese Archipelago (think for example of the small archipelago of the Senkaku islands, disputes with China).

They would also provide air coverage for a possible amphibious operation (not so remote probability), conducted by the IZUMO and HYUGA fighters. The former would embark the F-35B, while the latter the MV-22B convertiplanes, loaded with marines.

Similarly, once TRIESTE has entered service, our Navy is planning future amphibious operations. Even if we have only 15 F-35Bs for the CAVOUR Flight Group (which means an operational availability of 10/12 machines) and there is a serious danger that the TRIESTE will be mainly used for humanitarian purposes.

The American military device, in recent years, is undergoing a profound restructuring in order to face ...
1889
Read

The fast multi-role vessel Project 02510 entered service on November 24 with the Baltic Fleet of the ...
1998
Read

The IRINI mission - launched last year by the European Union to support the UN embargo, aimed at blocking the ...
3559
Read

The hull of the icebreaker ship Evpatiy Kolovrat, the class leader of Project 21180M, was set up at Almaz ...
874
Read