Home Military world The French navy is running out of missiles

The French navy is running out of missiles 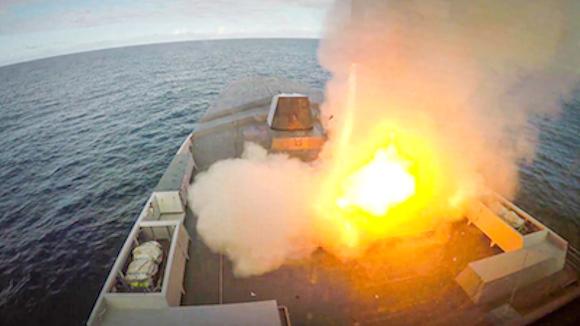 From the interview of President Macron with the chiefs of staff of the French armed forces - following the commemoration for the 102th anniversary of the end of the Great War - some interesting information comes out, especially on the Navy.

Indeed, the Chief of Staff of the Marine Nationale, Admiral Pierre Vandier, informed the president that the multi-mission frigate (FREMM) Britain (entered service in 2018) had just successfully carried out a cruise missile launch (SCALP NAVAL). Three weeks after the new nuclear attack submarine (SNA) Suffren carried out the same operation off Biscarrosse, where the missile test center of the Directorate General for Armaments (DGA) is located.

The success of the launch makes it possible to rekindle the spotlight on a very important issue, highlighted by a French operation two years ago.

The operation in question is the one carried out in April 2018 with British and American forces against the Syrian chemical program, a few days after a alleged attack on chlorine in Douma (in eastern Syria) On the French side, the FREMMs Aquitaine, Auvergne e Languedoc they were particularly involved in this action. The first two frigates were to launch three SCALP NAVALs each, the third had been placed in reserve.

Feedback on the experience of this operation, called Hamilton, was the subject of a parliamentary debate in November 2018, the conclusions of which highlighted some critical issues, such as the need to implement the number of cruise missiles and the improvement of firing training of so-called "complex" ammunition. It was therefore essential to start a reflection on the tactical use of these weapons in the face of the A2 / AD capabilities of a possible opponent.

On a technical level, therefore, the successful launch of SCALP NAVAL by the Britain risks "fixing" the misadventures of the past, as Admiral Vandier pointed out. As for the training of sailors, things are a bit more complicated as the French Navy lacks "complex" ammunition.

"As for ammunition stocks, they do not allow crews to be trained for an important commitment. For example, the lack of ASTER missiles does not allow to honor the equipment and to carry out training shots according to the ambitious Mercator (the strategic plan of the Navy). Likewise, there are not enough missiles to carry out training launches of SCALP NAVAL or MM-40, ”said MP Didier Le Gac, rapporteur on allocations for the Navy for 2021.

This situation is not new. The predecessor of the current Chief of Staff, Admiral Prazück, had highlighted it several times before the French Parliament. Last May, he had hoped (apparently to no avail) that the stimulus plan that Paris was preparing to remedy the economic effects of the Covid-19 epidemic would allow it to supplement the stocks of "complex" ammunition: the SCALP NAVAL, F-21 torpedoes, ASTER-15/30 surface-to-air missiles as well as EXOCET anti-ship missiles produced in France.

The American military device, in recent years, is undergoing a profound restructuring in order to face ...
1880
Read

The fast multi-role vessel Project 02510 entered service on November 24 with the Baltic Fleet of the ...
1996
Read

The IRINI mission - launched last year by the European Union to support the UN embargo, aimed at blocking the ...
3558
Read

The hull of the icebreaker ship Evpatiy Kolovrat, the class leader of Project 21180M, was set up at Almaz ...
873
Read