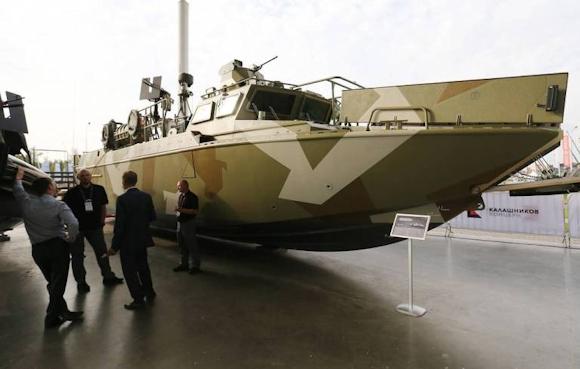 "The Project 02510 (BK-16) high-speed landing craft, developed by JSC Kalashnikov Concern, was built at the Rybinsk shipyard and entered service with the Baltic Fleet operating in support of a detachment of forces specials allocated in the Kaliningrad region ", Martov said.

“This is the first BK-16 vessel to come into line in the Baltic Fleet. In 2021, the Fleet will receive additional boats of this class ", the spokesman said.

The structure and hull of the Project 02510 is made with an AMg alloy (aluminum magnesium) having a length of 16,45 meters, a width of 4 meters, a draft of 0,87 meters, a height of 4,33 meters from the waterline, with a displacement of 22 tons, one speed, thanks to the two 780hp engines, up to 42 knots and an autonomy of up to 400 nautical miles with a crew of two members and up to 19 units on board. The ship is commanded from the upper deck where there is a bridge with large windows with wipers to provide operators with a 360 ° view.

The front section of the upper deck has been designed to ensure the launch and recovery of light reconnaissance UAVs such as the ZALA 421-16EM, developed by the Kalashnikov Concern subsidiary ZALA Aero Group. The UAV provides greater situation awareness and the ability to engage targets effectively on land and sea.

Up to 18 soldiers can be accommodated on the lower deck and has two windows on both sides, while the engine room, located aft of the lower deck, is accessed from the upper deck via two hatches.

The unit can be equipped with a remote control turret (RWS) Modul Boyevoy Distantsionno Upravlyaemiy (MBDU), manufactured by Kalashnikov Concern, which can be armed with a 7,62mm caliber machine gun, a 12,7mm heavy machine gun, an automatic grenade launcher AG-17 30mm or a 40mm grenade launcher. In addition, the craft can also be equipped with anti-tank missiles 3M133 Kornet.

The turret MBDU it is also equipped with a two-axis gyroscopic aiming device equipped with surveillance cameras with a wide and narrow field of view (FOV), automatic target tracking system and laser rangefinder. There MBDU it is also equipped with filters for image optimization and with its systems it can acquire targets in a radius of 2,5 km and store up to 10 static targets. It has a horizontal displacement angle of 360 °, a vertical displacement angle between -20 ° and 70 ° and an angular rotation rate of 60 ° per second.

The turret is armored to withstand 7,62 x 54mm armor-piercing shells from the SVD sniper rifle / PKM machine gun up to the STANAG 4569 level III standard.

When he was secretary of state, John Kerry had threatened Erdoğan to expel Turkey from NATO (despite not ...
1308
Read

During the last world war, the Italian state abandoned thousands of ascari (Eritrean fighters) who ...
3366
Read