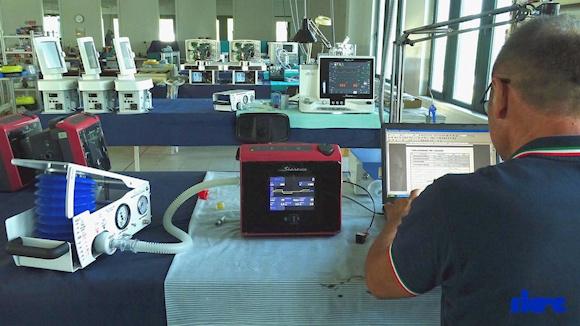 In an official note, Defense Minister Guerini said that civilian Defense personnel are contributing to the great effort underway.

The Ministry of via XX Settembre, as part of the support provided for the coronavirus emergency, will in fact contribute to the production of devices for the needs of intensive and sub-intensive care rooms at national level.

Under the coordination of the Civil Protection Department, a staff rate of 25 units of the Defense Industries Company will be made available to the Italian company in the sector (Siare Enginereering of Valsamoggia in the province of Bologna), starting next week and for a period of about 4 months, in order to implement its production capacity.

It is an emergency situation and I immediately took up the Defense-Civil Industry collaboration project (as happened during the Great War) for the production of lung respirators destined primarily for Lombardy, Emilia Romagna and Piedmont, regions most affected by the number of patients in need of therapyGuerini commented.

For the emergency, the Defense also made available - in case of need at the request of the competent Authorities - a total of about 2.200 rooms and about 6.500 beds, distributed throughout the national territory, in favor of citizens who may have the need to undergo the surveillance period.

The Ministry, on the instructions of Minister Guerini, also made its medical staff available.

The American military device, in recent years, is undergoing a profound restructuring in order to face ...
1779
Read

The fast multi-role vessel Project 02510 entered service on November 24 with the Baltic Fleet of the ...
1962
Read

The IRINI mission - launched last year by the European Union to support the UN embargo, aimed at blocking the ...
3510
Read

The hull of the icebreaker ship Evpatiy Kolovrat, the class leader of Project 21180M, was set up at Almaz ...
861
Read

Only 5 years ago the Turkish press was promoting the new ALTAY national battle tank as the most modern MBT in existence ...
3641
Read

According to a press release released on November 23, 2020, Huntington Ingalls Industries Shipyards have ...
1004
Read

After 48 years to protect the skies of Japan on November 20 they were officially withdrawn from service ...
1478
Read