Home Military world The composition of the Italian infantry in ...

The composition of the Italian infantry in the current operational scenarios 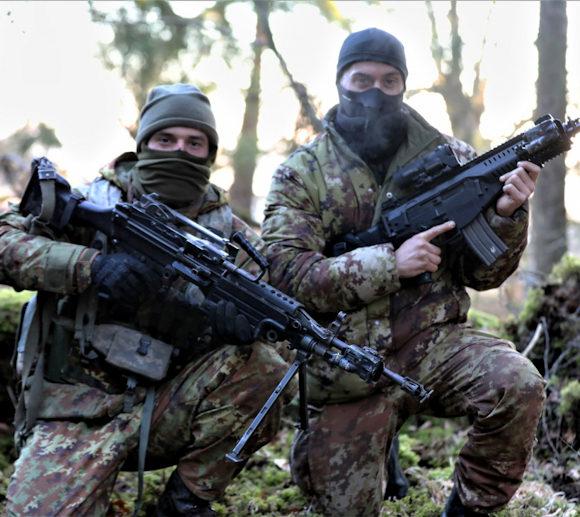 To win a battle, a commander must use the capabilities of all the Weapons at his disposal, carefully coordinating them so that they can provide the best possible contribution.

In modern times, an example of such coordination, in a conventional conflict, has been offered by the commanders of British infantry units, engaged in the reconquest of the Falkland Islands between May and June 1982.

In that particular tactical context, the infantry units (Royal Marines, Wales Guards, Parà and Scottish Guards) were able to defeat the Argentine forces also thanks to the support of land artillery fire (with howitzers / cannon Light Gun 105 mm), naval artillery (with 114 mm pieces) of destroyers and frigates of the Royal Navy, 30 mm guns of armored vehicles (such as light tanks Scimitar) and ground attacks launched by Harrier embarked.

The coordination of all these assets was undoubtedly important for the final victory of the British, however it was still up to the infantry units, in the fulfillment of their traditional tasks, to bring themselves into close contact with the enemy, flush him out of his positions (the Argentines they had entrenched themselves very well) and subsequently garrison the conquered land.

The example just described could be applied today in any other theater of war where an infantry unit operates. 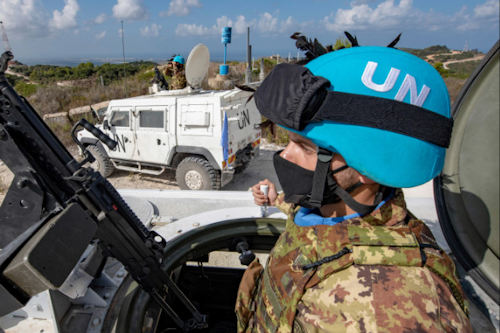 Thanks to the thirty-year participation in international missions, the Italian Army has now gained a wealth of experience of all respect. In fact, at the beginning of the 2000s, precisely by analyzing the lessons learned on the ground, the General Staff of the Army concluded that it was necessary to reform the operational component, in order to develop a tool that could be more integrated with the Allies.

It was necessary to have infantry units with better strategic and tactical mobility as well as greater flexibility, in order to be able to counter diversified threats.

The "Future Infantry" project was launched to respond effectively to the requests coming from the operational theaters where the Italian Army with its land units was (and still is).

Infantry is the cornerstone of any contingent employed in an international mission. It is called upon to provide multiple operational capabilities ranging from humanitarian relief to operations combat medium and high intensity. Its role, therefore, has greatly expanded in recent years.

Among the first measures that were taken, some significant changes to the training process of officers, non-commissioned officers and riflemen were highlighted. In particular, for the commanders of smaller units, the growth path was improved, paying greater attention to command action, such as the leadership of the platoon. 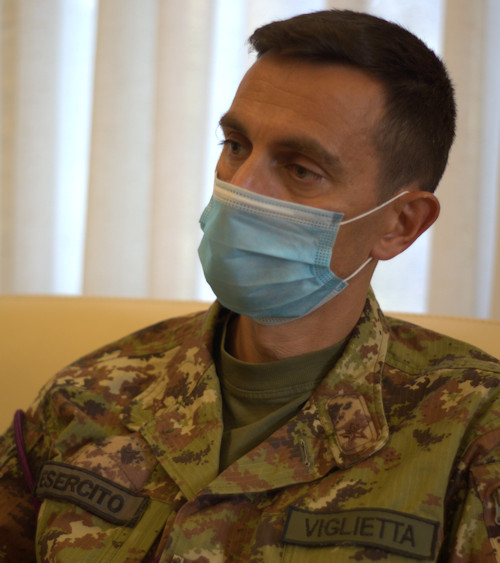 In support of the validity of these changes, the commander of the Cesano Infantry School, Brigadier General Roberto Viglietta was able to highlight, during a recent Online Defense visit to the School, that "The infantryman has always found himself having to manage different capabilities with respect to his specialization, such as artillery fire, aerial fire through JTACs (Joint Terminal Attack Controller, NdA), the armored / armored component " adding that "The basic formation of the infantry officer (as well as that of marshals) is that of a multi-weapon commander, able to manage multiple types of units (genius, transmissions, cavalry) and sources of fire (land, naval, CAS, etc.)".

It is therefore of vital importance for the infantry (as for all other specialties) to be able to maintain constant training as, as General Viglietta himself postulates “A weapon system can also be acquired relatively quickly while the operational capabilities of a department and its commander are the result of continuous training, which must be repeated over time, otherwise it would lead to a decline in efficiency ".

This is why it is important for a commander of smaller units to be familiar with your own "command cycle within an operational cycle, understood as the planning, evaluation and conduct of an operation in the theater. And this is what the commander of minor infantry units on the ground must do: visualize the operational situation, describe it and guide the unit, be it a platoon or a company ". Furthermore, General Viglietta had the opportunity to describe his experience in the Afghan theater when a sergeant major, deputy platoon commander, had under his orders a JTAC (directed by a lieutenant) who received instructions from him on how and when to make the CAS assigned to their operation intervene. This is significant, in fact Commander Viglietta recalled that “Having a JTAC employee in the field simplifies and speeds up procedures considerably, as I was able to verify during my stay in the Afghan theater. Making a comparison with the mission in the Balkans, in that operational context to request air support it was necessary to contact the regimental command, which would then contact the brigade and then the division command and finally the NATO command: in case of need, they would have had to wait a very long time to have an air attack vector ". 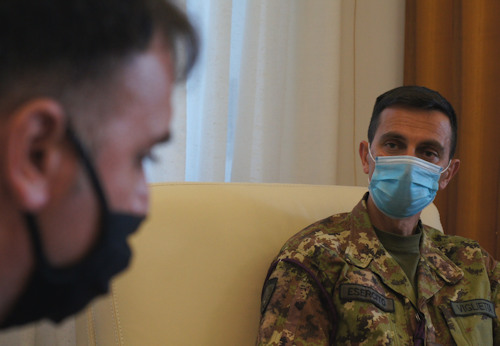 The infantry company, by integrating multi-weapon assets, therefore constitutes the minor complex. The commander, while leading an infantry unit, will have more components at his disposal that he will have to coordinate, from here "The absolute need to train the future commander, not only on the procedures of the line infantry but also for what concerns the firing with mortars (60, 81 and 120 mm), the anti-tank systems (Spike MR / LR), the use of mini UAVs, with fire from the onboard weapons of VBM (Arrow 8x8), VCC (Dardo) and more ", adds the general.

The current rifle company is structured on a command team, three rifle platoons and a maneuver support platoon.

Each rifle platoon is made up of four teams, one of which is supporting the maneuver. Each team has 8 infantrymen transported, in the case of the regiments of the Medium brigades, on a VBM Arrow 8x8 (in those Read on two VTLMs Lynx 4x4), to which the 3 crew soldiers must be added, for a total of 11 elements. So the team on foot is made up of 8 infantry, with which it is possible to create two groups and teams nature, one of which with an "expert shooter" armed with an ARX-200 in caliber 7,62x51 mm, while the second has a rifleman with an "anti-tank" qualification, armed with bazooka 3. Both groups and teams they have a rifleman equipped with a 160x40 mm GLX-46 grenade launcher and one with a Minimi in caliber 5,56x45 mm (it is desirable in the future to replace it with the 7,62x51 mm version).

With this configuration, the rifle team has five fundamental elements: command and control (thanks to the radio equipment to communicate with both the platoon and the team), the RSTA capability (provided by the electro-optical equipment supplied), the ability to maneuver (ensured by riflemen and VBM or VCC platforms), maneuvering support (thanks to the presence of grenade launchers, counter-tank systems and machine guns) and logistical support characterized by the transport capacities offered by Arrow. 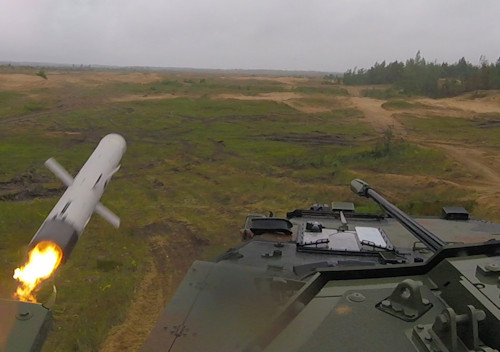 In addition, the platoon can have good skills in indirect fire, thanks to grenade launchers and 210 mm C-60 Hirtenberger light mortars - in the maneuver support team - and counter-tank.

For greater firepower, you can rely on the maneuver support platoon that comes with 2 VBMs Arrow 8x8 counter tanks (equipped with missiles Spike MR) and 6 VTLM Lynx 4x4. Indirect firing is ensured thanks to the reintroduction of the Spanish Expal 81 mm medium mortars, three in number.

Other important pawns, within the maneuver support company, are the squad of sharpshooters equipped with Sako TRG-42 rifles in caliber 8,6x70 (replaced in the near future by Victrix Scorpio in the same caliber) and by an SAO (Objective Surveillance and Acquisition) team.

Thanks to the maneuvering support platoon, the rifle company can carry out numerous missions autonomously, while coordinating other assets, which have proved indispensable to face today's operational scenarios.

This afternoon, the Ministry of Defense of the Russian Federation issued the following statement: "Two ...
1430
Read

The latest news about the movements of Russian troops towards Crimea speak of three regiments of the VDV (Vozdušno -...
5562
Read

The tension between Ukraine and Russia does not seem to be defused, having been engaged for weeks to "flex their muscles" in the ...
4427
Read

In March 2021, three nuclear submarines simultaneously emerged near the Alexandra Island of the archipelago of ...
1791
Read

The Kirov class nuclear-powered cruiser (Project 11442M) Admiral Nakhimov which has been under construction since 2013 ...
2870
Read

The utterances of the Deputy Prime Minister of the Russian Federation, dated 8 April, Dmitry Nikolaevič Kozak, are ...
3979
Read

Some operators of the special forces of the Russian Federation, the KSO (Komandovanie sil spetsial'nalnykh operatsii), ...
7419
Read

The Takuba Task Force is taking shape more and more, wanted by France to fight the jihadist groups operating ...
5089
Read