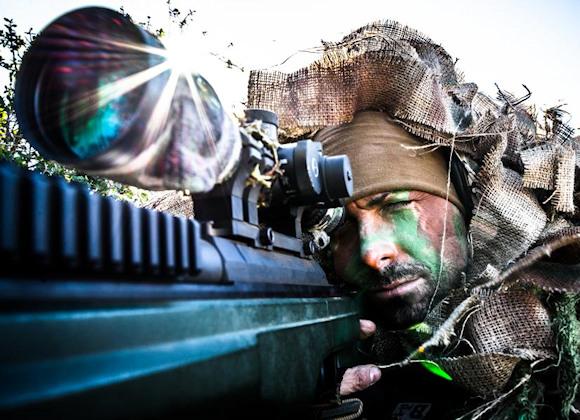 In the Italian Army, from the point of view of conventional units, the traditions and skills of the Bersaglieri, tankers, cavalrymen and Alpine troops are often highlighted. However, there are infantry regiments such as the 82nd Torino, framed in the mechanized brigade Pinerolo, which can boast numerous operational cycles, both in war and in international missions but also in aid of populations struck by natural disasters.

The 82nd was constituted, within the Royal Army, on 1 November 1884, becoming part, together with the 81st infantry regiment, of the brigade Torino. The regiment participates in the Eritrean Campaign (1895 - 96), is used in rescue operations to the Calabrian - Sicilian populations, hit by the earthquake of December 1908 and participates in the Libyan campaign from 1911 to 1913, deserving a Silver Medal. to Military Valor.

At the outbreak of the First World War he fought on the Col di Lana, Volkowniak, Capo Sile, Piave Vecchio, Piave Nuovo, Stenico and Val Giudicarie. He receives the Military Order of Italy and the second Silver Medal for Military Valor.

Dissolved in 1926, it was reconstituted on 1 July 1938 as the 82nd infantry regiment Torino and enters together with the 81st infantry and the 52nd artillery in the 52a infantry division Torino. 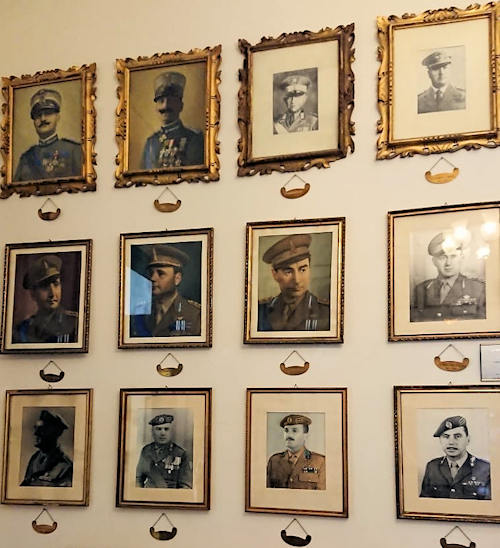 Take part in the campaign on the Western front, then in the Yugoslav campaign. He left for Russia in 1941 and followed the epic of the Expeditionary Corps and the Italian Army in Russia, upon return from which the whole division was suppressed in February 1943. For his behavior, the regiment will receive a Gold Medal and a d ' Silver for Military Valor.

On 1 September 1950 the regiment is reconstituted in Forlì within the Infantry division Trieste. Employed in the "T" group set up on the occasion of the return of Trieste to Italy in 1954, upon its dissolution it passes into force to the infantry division thunderbolt settling first in Trieste and then in Gorizia.

Disbanded on October 19, 1975, the 82nd Battalion will be called the XNUMXnd Mechanized Infantry Battalion Torino, and will receive Flag and regimental traditions by joining the mechanized brigade Gorizia. In 1976 he was employed in the relief work for the Friulian populations hit by the earthquake.

On September 3, 1992, the battalion is framed in the reconstituted 82nd Infantry Regiment Torino and passes to the employ of the brigade Mantova and therefore of the armored brigade Ram, taking part in the “Sicilian Vespers” and “Tortoise” Operations.

From 5 November 2001 the regiment passed under the command of the armored brigade Pinerolo and from 17 December it is displaced in Barletta.

In the Balkans he took part in various International Missions: in 2004-2005 in Albania (Operation NHQT), in 2006 in Bosnia (Operation Althea), in 2008 in Kosovo (Operation Joint Enterprise).

In May 2009 the 82nd Reg Torino was chosen, as part of the FORZA NEC project, as the first unit destined to be transformed into a digitalized media infantry regiment, starting the experimentation of new vehicles and equipment. 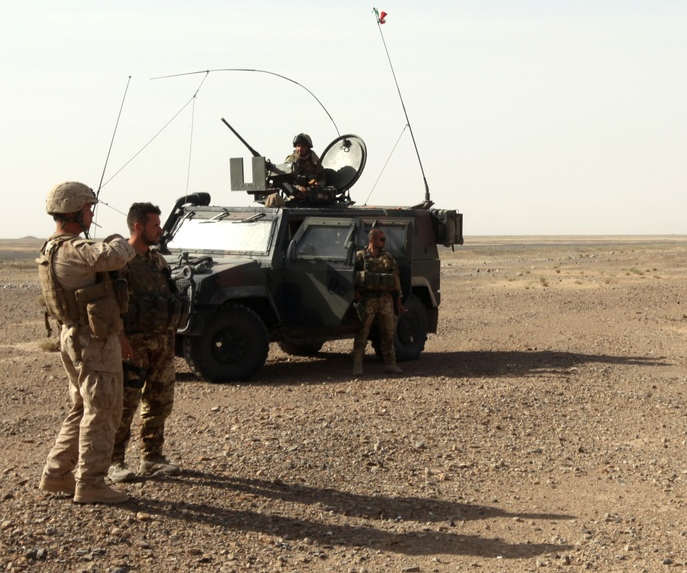 From June 2010 to September 2011, the regiment participates in the ISAF Mission in Afghanistan, constantly ensuring the presence of a rifle company equipped with the new Medium Armored Vehicle (VBM), Arrow 8x8.

The 82nd is part of the middle brigade Pinerolo of Bari, which includes, in addition to the rgt Torino, a Logistics Rgt stationed in Bari, a Bersaglieri rgt (the 7th from Altamura), a cavalry rgt (the 15th from Lecce), an infantry rgt (the 9th from Trani), an artillery rgt (the 21st ° of Foggia) and the 11 ° genius spoilers of Foggia.

The use of medium brigades, according to the plans elaborated in the past by SME, must involve a marked flexibility in the control of large areas, while maintaining adequate combat capabilities. They are mainly aimed at projection operations that require, if necessary, the carrying out of long patrols, offering the transported personnel a tolerable comfort (a characteristic certainly not the prerogative of heavy units) and protection of an adequate level.

Therefore, if the raison d'être of medium infantry regiments - such as the 82nd - is to be able to project them at long distances, in protected conditions, also being able to make use of direct / indirect fire support, they should be reorganized the basic structure, in order to make these skills more performing. 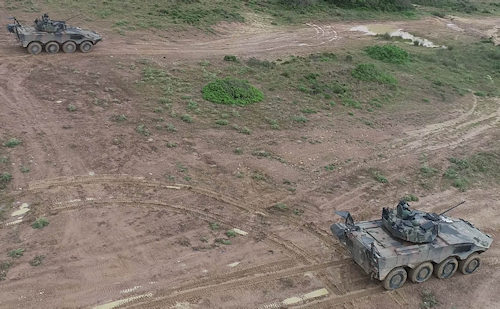 Currently the platoons of the rgt Torino - as well as the other regiments of medium infantry - each are divided into 4 Arrow (each with a crew of three soldiers), three of which carry a rifle squad of 8 infantry, while the fourth Arrow transports the maneuver support team made up of 6 elements (plus the platoon commander and the radio operator).

Reviewing the typology of Arrow to assign to the medium infantry platoons you could have two rifle squads, capable of deploying three fire teams, plus a support team of 4, instead of the current three but with two fire teams and a support team of six.

This would be possible by introducing the APC (Armored Personnel Carrier) version of the Arrow 8x8, without a turret (among other things, the writer was able to personally see the vulnerability of the turret, as rotating it by 60 ° creates an opening about 5 cm thick between it and the hull), perhaps with a Hitrole remote equipped with 12,7 mm machine gun and 40 mm automatic grenade launcher. This version would allow the transport of 11 infantry (plus two crew members). The platoons would then consist of two Arrow in APC configuration and one Fighting (with a 35 mm gun instead of a 25 mm one), instead of four Fighting.

In addition, the armament of infantry and maneuver support teams should also be revolutionized. 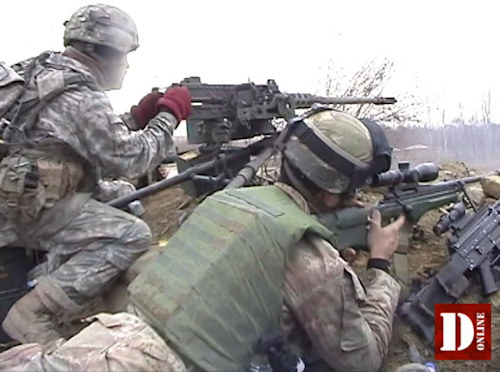 Il video about the battle of Bala Murghab, aired on ON AIR defense last December 15, he showed how the Sassari infantrymen were unable to use small arms as the Taliban did not get closer than 1,5 / 2 km away from their positions. In that case the only effective weapons, as seen in the images, were the tripod-mounted Browning and the Sako TRG-42 in .338 Lapua Magnum (8,6x70 mm).

A significant change could be to drop the Minimum (recent studies carried out by the British Army have shown the ineffectiveness of area saturation fire in favor of precision one), replacing them with the ARX-200 battle rifle in 7,62x51 mm and introducing an infantry squad level bolt action, possibly in .338 Norma Magnum (8,6x63 mm). So we could have two nature teams, each equipped with two 5,56 caliber weapons (one with a 40mm grenade launcher), a 7,62 caliber weapon and an 8,6 caliber precision weapon capable of beating targets up to 1.500 meters.

The maneuver support team, in the new configuration, would be composed of 4 elements, equipped with a MG-42/59 in 7,62x51 mm, a rocket launcher c / c Panzerfaust 3 and a 60mm lightweight mortar. Here, too, significant changes could be made, such as replacing the MG with the ARX-200 and the bazooka with the c / c missile Spike medium range. The latter has similar weights to the German rocket launcher but would provide much higher performance in terms of range and accuracy.

The supplies of military equipment by NATO and European countries to fighters continue in these days ...
10010
Read

The surprise attack of Bilohorivka will remain in the history of the Russian aggression war on Ukraine on the list ...
39138
Read

Some countries of the former Eastern Bloc have announced that they intend to sell their MBT holdings to Ukraine in order to ...
31998
Read

A few days ago we published in rapid succession the first and second part of an analysis relating to ...
119278
Read

The escalation of military supplies by NATO continues in Kiev. In recent weeks, Ukrainian requests ...
87619
Read

Since the start of the Special Operation, the Kiev Air Force has suffered heavy losses. It would seem that the Russians ...
34470
Read