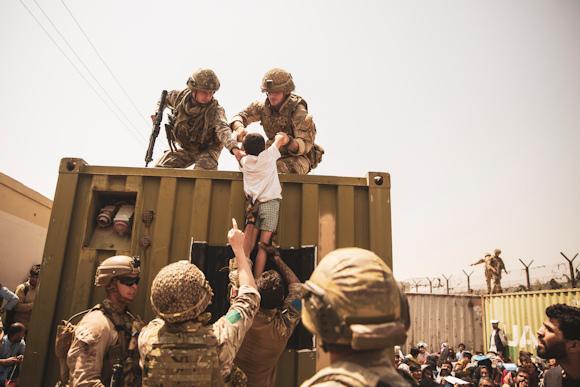 Airport security is certainly not easy here either, because an aircraft is the most vulnerable in the world.

But we distinguish two basic areas the first is the safety of the installation and the second is the safety ring more or less large that surrounds an airport.

I want to make a small and simple analysis on the current situation of the international airport of Kabul, the only way out of the country in a landlocked nation. If we take a satellite photo of the installation, it is easy to see that it is practically immersed in the urban fabric.

To make the procedures for embarking, disembarking, refueling, taking off, landing, etc. there should be a safety zone free from the dangers of firearms of different power and caliber. Not to mention internal public order or having gates, tracks, etc. free from people, materials and vehicles.

As we have seen, this safety chain has completely blown up, so much so that planes take off with people attached to the outside of the cockpit, with inevitable unfortunate end from the subjects, having said that it would not be in the least conceivable that an aircraft would try to start the procedures to take off. when surrounded by crowds of people.

In my opinion, the pilot should not have even started the engines before ground safety personnel had cleared the track, also because what the pilot was running away from in such a hurry, enough to justify this maneuver? 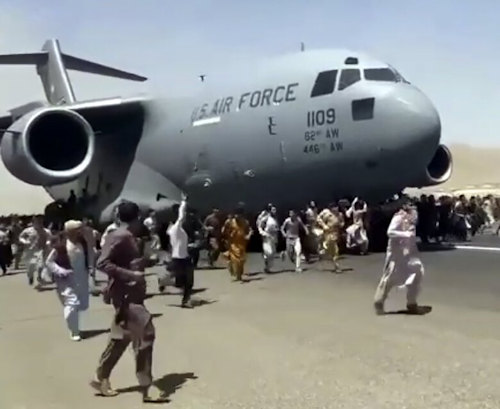 We must not forget that at the Kabul airport there is a large US contingent, not to mention the UK and Turkish rates, barricaded inside, a sort of "Alamo" of our days.

In the aftermath of the chaos, on August 17, United States Central Command (CENTCOM) declared that Hamid Karzai International Airport in the capital of Afghanistan he was back free, safe and open to civil air traffic which operates according to the rules of visual flight. An internal security management that remembers the troops left without orders in the aftermath of 8 September ...

But let's get to the thorniest issue: the security ring around the airport, being surrounded on one side by a dense urban fabric and on the other by hilly reliefs, its safety without external land patrols is practically impossible. fact leaves this vital infrastructure to the complete benevolence of the Taliban militiamen.

Taking into consideration the weapons available in Afghanistan, hitting a plane on take-off / landing is like shooting a pigeon. Leaving aside the multitude of large caliber machine gunners, an RPG, which has an "anti-aircraft" range of about 900m, turns out to be a danger - unlikely but potential - from which one cannot easily defend oneself. Moreover, a possible shooter could hide in every alley or on every roof near the airport.

But given that in the Afghan territory the weapons left by the Americans are so many and it is not difficult to think that a chest of Stinger can be found. The Stinger has a target range of up to 4.800m and can engage threats at low altitudes up to 3.800m, which means that a militiaman perched on the hills immediately near the airport, which are less than 2000 meters away, has a great opportunity to fire and a good chance of hitting a target from the hated West.

After the decommissioning of the M551 Sheridan tank, which took place in the mid-90s of the last century, the US Army ...
5006
Read

The director of the Kredmash mechanical plant in Kremenchuk would have confirmed (source Komsomol'skaja Pravda) that ...
5398
Read

On June 6, with two separate ceremonies at the Fort Wainwright and Elmendorf-Richardson bases, she was reactivated in ...
8211
Read

For a long time, Difesa Online has emphasized the importance of acquiring (and maintaining) artillery pieces, monotube and ...
21756
Read

British Army Chief of Staff Sir Patrick Sanders says the invasion of Ukraine by the ...
11703
Read

During the last world war the Panzerkampfwagen V Panther, having solved the initial mechanical problems, was ...
26967
Read

The conflict in Ukraine has "distracted" the magazine in recent months from continuing to deal with issues relating to the ...
7202
Read