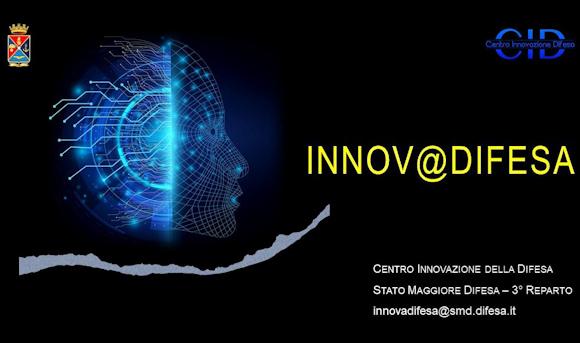 The Defense Innovation Center (CID), of the III Department of the Defense Staff, has already been active for some years and is becoming more and more a protagonist in the panorama of Italian defense. The CID has the task of guaranteeing the development and updating of an adequate conceptual and doctrinal framework, in order to support the transformation process of the national Military Instrument and in this sense it is operating in relation to Artificial Intelligence.

In the current year, in particular, it followed up on the initiative INNOV @ DEFENSE, Defense reference hub for innovation that embracing the paradigm of Open Innovation (i.e. by resorting to internal and external defense ideas, through academic critical thinking, the pragmatism of industrial reality and the intuition of the research context), is creating a network of experts aimed at grasping open innovation in the civil, private and institutional sectors through a connection action led by the CID. Precisely in this context, the CID promoted two workshops held in April and July.

In the second panel, prof. Andrea Castiello d'Antonio, psychologist, former extraordinary professor of clinical and occupational psychology at the European University of Rome, who highlighted how AI is increasingly useful in different sectors of society but at the same time it is recorded an increase in the problems of "interfacing" between Man and Machine.

The third panel was attended by the lawyer Marco Provvidera, professor of International Law (Law of Armed Conflict), National Security, Law of the Intelligence, Comparate Counter-terrorism and Law of the Emerging Technologies, who analyzed the situation in the United States and in the European Union, highlighting how it is increasingly urgent to regulate the sector, also to prevent Western strategic and geopolitical competitors and adversaries from exploiting to their advantage the rules governing jus ad bellum and jus in bello.

In July, with the second, "Artificial Intelligence, Defense and Sustainability: New training needs, e-Leadership and evolution of decision-making processes", we have seen growing the interest of the public, universities and national industry around a topic that is becoming increasingly important for the development of the Armed Forces and national strategic thinking.

The first of the two panels organized in this second meeting, saw, among others, the intervention of Prof. DM Roman, expert in the management of conflicts deriving from the implementation of New Technologies, and of Dr. E. Hunter, Senior Director Industry Strategy & Transformation EMEA - Oracle. During the panel, the aspects relating to the new digital skills and the new training needs of the staff were introduced from various points of view, with particular attention to the aspects connected to the critical issues related to the sense of social responsibility, to the economic analysis of AI as an exponential technology (the value of complementary skills) and the possible applications of AI for the development of divergence. The panel was therefore enriched by the experience acquired by the Defense with the Challenge-Amelia project, a practical application of the use of AI to meet the growing need to adapt the training of the military ruling class.

The second and conclusive panel, which saw the interventions of Prof. M. Ruggieri, professor of telecommunications at the University of Rome "Tor Vergata", by Eng. A. Costaglioli, Chief Innovation Officer of INPECO Group, and of prof. A. Castiello d'Antonio, emphasized the aspects connected to human-machine teaming, the quality of data and the algorithm for an effective implementation of AI, new leadership models and the figure of the new e-leader .

The third workshop is currently in preparation, which will presumably take place at the beginning of October and which we will have the opportunity to talk about later.

The experience gained on the ground, in the last two decades, by the Italian military personnel engaged in the missions ...
12593
Read

After the decommissioning of the M551 Sheridan tank, which took place in the mid-90s of the last century, the US Army ...
16338
Read

The director of the Kredmash mechanical plant in Kremenchuk would have confirmed (source Komsomol'skaja Pravda) that ...
7755
Read

On June 6, with two separate ceremonies at the Fort Wainwright and Elmendorf-Richardson bases, she was reactivated in ...
8999
Read

For a long time, Difesa Online has emphasized the importance of acquiring (and maintaining) artillery pieces, monotube and ...
22703
Read

British Army Chief of Staff Sir Patrick Sanders says the invasion of Ukraine by the ...
12809
Read

During the last world war the Panzerkampfwagen V Panther, having solved the initial mechanical problems, was ...
27658
Read

The conflict in Ukraine has "distracted" the magazine in recent months from continuing to deal with issues relating to the ...
7390
Read