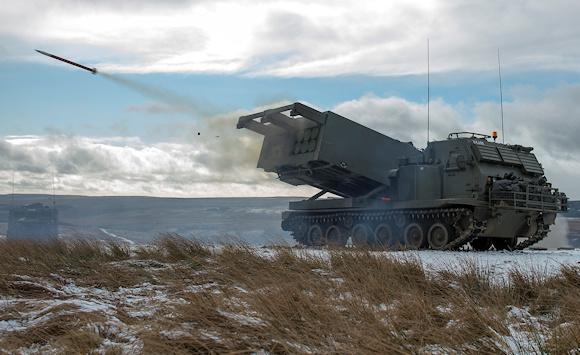 This decision comes in response to Ukrainian forces' demands for longer-range precision weapons to defend against Russian heavy artillery, which is achieving devastating results in the Donbass theater of operations.

The minister stated that: “The UK stands with Ukraine in this fight and is taking a leading role in providing its heroic troops with the vital weapons they need to defend their country from an unprovoked invasion. If the international community continues to support it, I believe that Ukraine can win ".

In the same year, the MLRS-EPG consortium was created in Munich, consisting of Dihel, Hunting Engineering, Aerospatiale and Snia-BPD, in charge of the production of vehicles and ammunition for the 4 European nations (including Italy). The consortium's first deliveries, which took place in 1989, involved a total of 284 launchers and 190 rockets.

The system consists of a launcher-loader vehicle Self Propelled Launcher-Loader (SPLL) and the 227 mm ammunition formed by various types of rockets.

On the back of the chassis (which is an elongated version of the IFV M-2 Bradley) the launcher-magazine is placed with two "packs", each containing 6 rockets.

Great Britain is equipped with about 40 M270B1, version equipped with INS / GPS GMLRS guided rockets (18 units also supplied to the 5th rgt land artillery Superga of the Italian Army) capable of reaching the maximum range of 70 km. Probably, in the coming months, the Ukrainians will also be able to receive the most recent version of the rocket, GMLRS-ER, credited with a maximum range of 150 km.

The director of the Kredmash mechanical plant in Kremenchuk would have confirmed (source Komsomol'skaja Pravda) that ...
1349
Read

On June 6, with two separate ceremonies at the Fort Wainwright and Elmendorf-Richardson bases, she was reactivated in ...
7633
Read

For a long time, Difesa Online has emphasized the importance of acquiring (and maintaining) artillery pieces, monotube and ...
21378
Read

British Army Chief of Staff Sir Patrick Sanders says the invasion of Ukraine by the ...
11326
Read

During the last world war the Panzerkampfwagen V Panther, having solved the initial mechanical problems, was ...
26671
Read

The conflict in Ukraine has "distracted" the magazine in recent months from continuing to deal with issues relating to the ...
7151
Read

A few weeks ago we mentioned how serious games (and among them war games) can help to understand ...
1931
Read