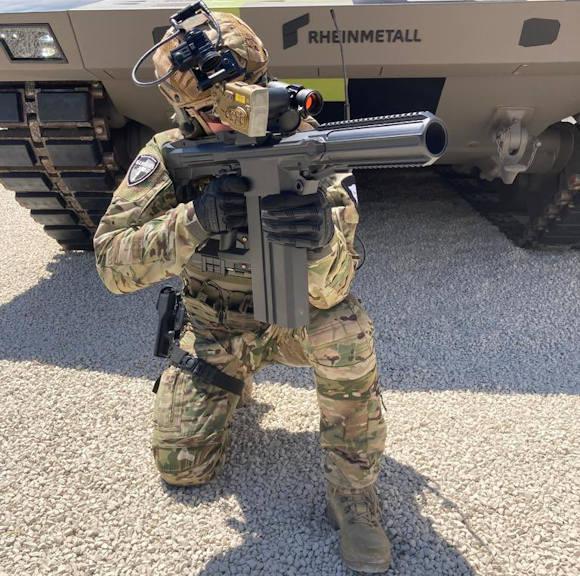 With the introduction, in the 60s of the last century, of the 40 mm portable grenade launcher (the American M79 and the German HK69), an attempt was made to increase the firepower of the infantry squad, particularly in the contexts of urban warfare (combat in an urban environment). Subsequently, a series of coaxial grenade launchers took place to be applied under the barrel of assault rifles in order to reduce the overall dimensions and, at the same time, to have more options in the choice of ammunition to use. So we went from the M-148 (forerunner of the M-203) to the more recent GLX-160 and M-320.

However, these systems have proved impractical, so much so that in recent years the figure of the rifleman / grenadier has been reintroduced into the infantry squad: an infantryman armed with a portable grenade launcher.

The Marine Corps, for example, has adopted the M-32A1 MGL (Multiple Grenade Launcher), a drum-type grenade launcher with 6 grenades.

The aim is to increase the volume of fire of the team, also being able to have different types of grenades (anti-personnel, HE, smoke bombs etc).

The new weapon from Rheinmetall is still under development. According to the German company, the SSW40 is the first automatic shoulder-mounted grenade launcher with box magazine. It is still unclear whether "automatic" means that this weapon is capable of delivering repeating fire.

However, it could be that the SSW40 is the first fully automatic or semi-automatic grenade launcher intended to be used on the shoulder as a traditional firearm. Rheinmetall says the SSW40's handling, ergonomics and specs were inspired by assault rifles, which gives the grenade launcher a very ergonomic design.

The SSW40 is derived from Hydra, shown at the annual SHOT Show of small arms in the United States in 2016.

The Hydra featured a hydraulic piston attached to the chamber and barrel and was designed to be able to fire 10 rounds in under two seconds, in a fully automatic mode. It was also specified that the weapon on display at the SHOT Show that year featured a six-round box magazine, but that four and 10-round magazines were also available.

The SSW40 is capable of employing Rheinmetall-Waffen's 40x46mm "magnum" shells, as well as all 40x46mm low-speed grenades.

In addition, Rheinmetall is producing a "family" of 40mm medium speed (MV) ammunition.

The new MV grenades include fragmentation, HE, and anti-tank models, as well as non-lethal ammunition, such as tear gas, door smashing, training, lighting, smoke and grenades flash. These shots, characterized by an extremely flat trajectory, allow you to engage targets up to 900 meters away.

It will be necessary to see if it will be convenient for the infantry squad to carry a sufficient number of magazines in order to have an adequate volume of fire.

After the decommissioning of the M551 Sheridan tank, which took place in the mid-90s of the last century, the US Army ...
730
Read

The director of the Kredmash mechanical plant in Kremenchuk would have confirmed (source Komsomol'skaja Pravda) that ...
4101
Read

On June 6, with two separate ceremonies at the Fort Wainwright and Elmendorf-Richardson bases, she was reactivated in ...
8008
Read

For a long time, Difesa Online has emphasized the importance of acquiring (and maintaining) artillery pieces, monotube and ...
21538
Read

British Army Chief of Staff Sir Patrick Sanders says the invasion of Ukraine by the ...
11523
Read

During the last world war the Panzerkampfwagen V Panther, having solved the initial mechanical problems, was ...
26779
Read