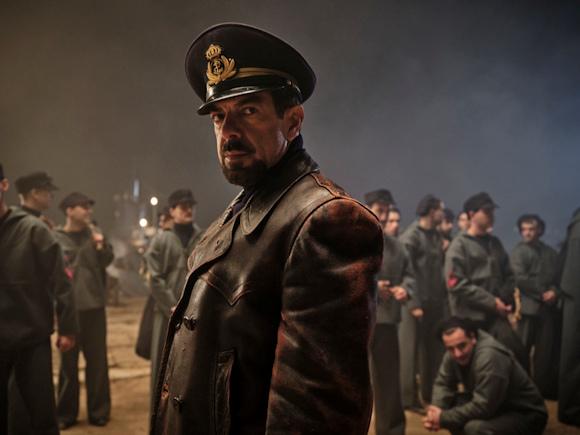 Filming of the film "Comandante" began last November, with the Roman actor Pierfrancesco Favino in the role of Commander Salvatore Todaro, a highly decorated submariner of the Xª MAS of the Regia Marina in the Second World War.

In a war action in the Atlantic, on 16 October 1940, Salvatore Todaro, in command of the submarine Commanding Caps sighted the Belgian steamer Kabalo (5.186 tons of displacement) and, after launching three torpedoes in vain, sank it using the guns on board (the boat was armed with two 100/47 mm guns). After sinking, Todaro approached and picked up the twenty-six survivors of the Belgian ship and towed them on a raft for four days. When the raft broke the towing cable, Todaro did not hesitate to host the castaways on the submarine until he landed them, unharmed, on the coast of the Azores islands.

It is a curious coincidence that today the almost incredible story of corvette captain Salvatore Todaro is being told, five Medals of Valor who, in November 1941, moved to the Xª Flottiglia MAS.

The idea was born in 2018 during the first rejections of the Conte-led executive: “I didn't like how Italy was behaving - underlines the screenwriter of the film Sandro Veronesi - and I wanted to say it through my profession. To remind us whose children and grandchildren we are, the Regia Marina has trained men like Todaro”.

The film dedicated to Todaro will probably emphasize the criticism addressed to him by the German admiral Karl Dönitz, commander in chief of the submarines of the Navy. He apostrophized Todaro's act of generosity by saying that "not even the good Samaritan of the Gospel parable would have done such a thing".

Leaving aside the humanitarian side, Captain Todaro made a serious mistake that could lead to the death of his crew and the loss of the boat entrusted to him. Therefore, from a military point of view, the criticisms leveled by Dönitz were more than legitimate, especially since the future Reich Chancellor held Commander Todaro in high esteem as well as all the submariners of the Regia Marina.

Making a film about an Italian soldier who covered himself with glory in war is very commendable (given the "politically correct" that oppresses us every day) however, the fighting spirit should be exalted, certainly not the humanitarian one.

We could also ask ourselves why, if we wanted to make a film on the epic of the submariners of the Regia Marina during the Second World War, we didn't choose the commander Fecia of Cossato, which sank more than 86.500 tons of enemy shipping, or Gazzana Priaroggia decorated with 6 Medals of Military Valor (one gold, two silver and three bronze) and three Iron Crosses (first, second class and Knight's Cross). Even these commanders, quoting Veronesi's statement, were men trained by the Regia Marina, who fulfilled their duty to the extreme sacrifice.

The German Leopard 2 tank is one of the military vehicles requested by Ukraine to face the Russian offensive...
6677
Read

"While war is changing, France has and will have armies ready for the dangers of the century", these are the words of…
2826
Read

Germany stubbornly does not want to deprive itself of its tanks. Despite weeks of the campaign "Let's free the...
78768
Read

In recent years, Russia has shown the West its technological advances in the military field through the…
48157
Read

On December 16th, with a statement that had actually already been in the air for some time, the Japanese Prime Minister Fumio...
8787
Read

Over twenty years ago, at the end of 2001, the then British Prime Minister Tony Blair supported the need to drop the...
13129
Read