The Russians are developing anti-satellite capabilities 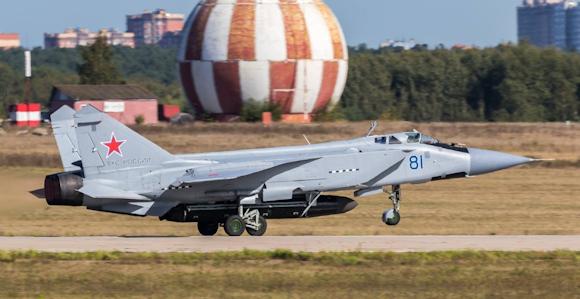 In September 2018, an aircraft photographer spotted something interesting while observing the activity at the Gromov Flight Research Institute in Zhukovsky, near Moscow. What caught his attention was a MiG-31BM fighter aircraft armed with a large black missile attached under the fuselage.

The MiG-31BM is a fighter known while the missile was of a model never appeared before. Instead it seemed to be the right size for an anti-satellite weapon.

The images that were published on the Internet confused analysts: it seemed, in fact, too large to be a normal radar-guided air-to-air missile.

The images brought to mind the ASAT project of the Soviet era called Contact, which included the MiG-31D aircraft and a missile, developed by the MKB Fakel design office. 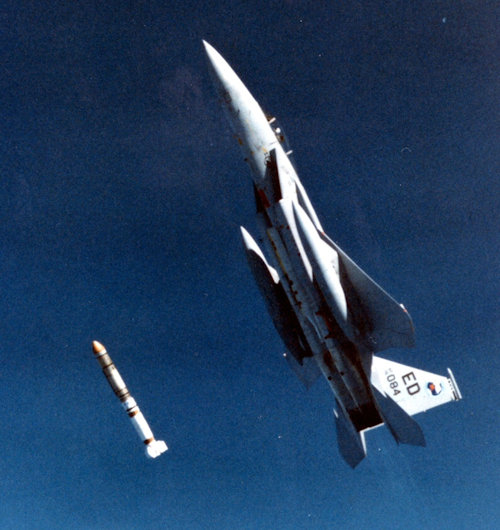 Contact was the Soviet response to the ASM-135A (American Air Launched Miniature Vehicle) which destroyed an American satellite in September 1985 (photo) after being launched from an F-15 fighter. MiG-31D test flights with the missile were reportedly conducted from the late 80s and early 90s, but without the use of satellites as a target.

So it looked like the new missile could be a new version of the Contact, as has been speculated in many articles in the weeks following the publication of the images.

In support of that idea there were at least two statements made by Russian officials. In August 2009, the Chief of Staff of the Russian Air Force, Aleksandr Zelin, said that the MiG-31 had been upgraded to perform the same space defense tasks as Soviet times. About eight years later, in February 2017, a commander of the Russian aerospace squadron, Yevgeny Polyakov, was sued by the Russian Ministry of Defense television channel Zvezda about the development of a new missile, usable by the MiG-31BM and intended to hitting near-space targets (between the stratosphere and the Earth's low orbit).

Analysis of Russian publicly available online sources leaves little doubt that the MiG-31BM and the new missile are part of a larger ASAT project called Burevestnik.

Most likely, the missile will act as a transport vehicle for small interceptor satellites that can approach and disable enemy satellites. Burevestnik it is a popular name in Russian culture, in fact, it is also the name given - through a popular vote - to a nuclear-powered subsonic cruise missile (9M730). 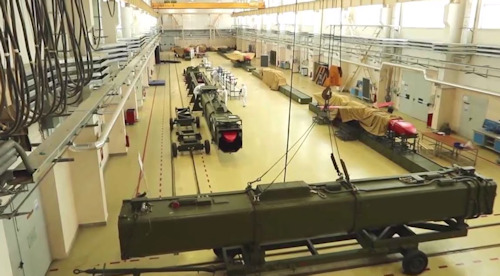 The project Burevestnik it has never been discussed in the Kremlin-controlled media (even in specialized publications), but details on the project have been leaked slowly in recent years, mainly through the tender documentation and contracts openly available on Russia's public procurement website. This showed that the project started on September 1, 2011, with a government contract awarded to the Design Bureau of Machine Building (NPK KBM), an arms manufacturer based in Kolomna (around 100km southeast of Moscow) and , it would seem, program coordinator.

At the end of the same month, NPK KBM signed a contract with a Moscow-based organization called the Central Scientific Research Institute of Chemistry and Mechanics, which in turn subcontracted the work on satellites called Burevestnik M.

Another phase of the project began on December 1, 2015, when NPK KBM received another government contract under which the Central Scientific Research Institute subsequently carried out work on satellites called Burevestnik KA M.

The difference between Burevestnik Myself Burevestnik KA M is not known, but a power point presentation of a Russian manufacturer of solar panels and batteries (PAO Saturn), which somehow ended up online in May last year, clearly identified them as two different satellites.

The confidential nature of the project and the background of some of the contractors involved strongly indicated an ASAT role. 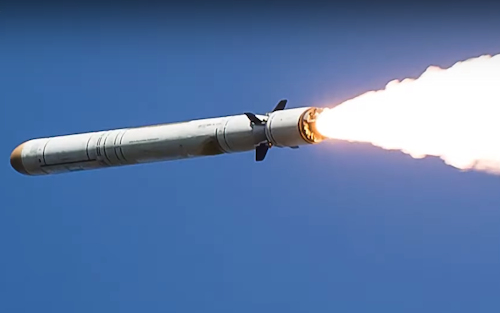 What has emerged from further research in the past few weeks is that the scope of the project Burevestnik it is much wider than previously thought. First, it turned out that another component of the project is a solid fuel missile.

A missile named Burevestnik it first appeared in the Russian Academy of Sciences annual report for 2015, where it was said to be one of several missiles for which new types of solid propellant were being developed. No further details emerged in the following year.

Analysis of the documents show that the missile is codenamed 293 and is built by NPO Iskra, a manufacturer of solid fuel rocket engines in Perm (approximately 1.400 kilometers east of Moscow). The contracts for "293" (some of which also mention the name Burevestnik) refer to the same 1 September 2011, contract awarded to NPK KBM which can also be seen in the documents on the satellites Burevestnik, leaving no doubt that the two are part of the same project.

NPO was assigned to 293 by NPK KBM on the same day. Some of the 293 contracts are based on a previous government contract dated August 7, 2009, which suggests that the roots of the project could go back even further.

The contracts available for missile 293, dating back to 2013, regularly mention parts called 14D812, 14D813 and 14S47, which presumably are the individual phases of the missile. 14S47 fits into a series of stages for the upper stages of space launch vehicles, strongly suggesting that it play the same role.

The procurement documents posted online by NPO Iskra in recent months also show that the company started working on another rocket called 2018 in December 328.

The parts ordered for this indicate that it is a modified version of missile 293, possibly using the new solid propellants mentioned in the 2015 Academy of Sciences report.

Two companies linked to such work in the report are also seen in one of the contracts for the rocket 328. 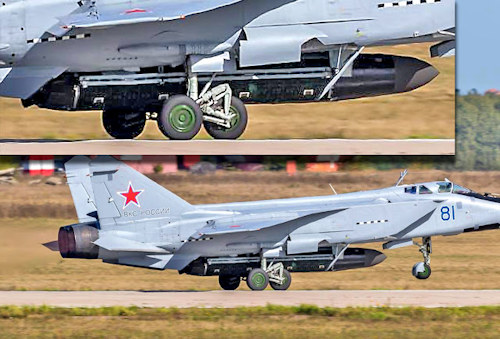 Research on Project 293 on the Russian Federation Public Procurement website later revealed that it is a missile carried by a modified version of the MiG-31 aircraft.

A contract signed by the Russian Aircraft Corporation MiG (RSK MiG), in August of last year, is aimed at working "to determine the safety of the operation of Object 08 with Product 293 under the influence of electromagnetic fields produced naturally and artificially".

The solid fuel missile, built by NPO Iskra as part of Burevestnik, is designed to be carried by a MiG aircraft described as Object 08. This is almost certainly the MiG-31BM aircraft with the number 81 which was seen carrying the mysterious black missile, in September 2018. Another RSK MiG contract, which can be linked to Burevestnik, refers to the aircraft more specifically as Object 08/1.

In June 2017 a contract was signed for Burevestnik between an organization called Krasnoarmeysk Scientific Research Institute of Mechanization and a company called OOO Expotekhvzryv, an institute of Krasnoarmeysk, about 60 kilometers north-east of Moscow.

It is a leading manufacturer of ammunition and explosives.

Burevestnik has already been tested in orbit, launched as co-passenger on a conventional rocket from the ground. However, this is likely to change in the future. In fact, as shown by the evidence presented above, the satellites, the 293 missile and the MiG-31BM aircraft are part of the same project.

Most likely, the 293 missile launched into the air will serve as a launch vehicle for future satellites Burevestnik.

In Russian terminology, all these components are described as belonging to the same "space complex", a word used for the combination of satellites, the launch vehicle and all the terrestrial infrastructure necessary to support them. In some official documents, Burevestnik it has been more specifically called "a space security complex", an appropriate term for an ASAT project.

In fact, they were first proposed by the MiG design office in the late 90s and culminated in a 2005 Russian / Kazakh proposal called Ishim to equip the plane with a three-stage, solid fuel missile capable of place 160 kg satellites, in orbits of 300 kilometers with a degree of 46 degrees inclination. With a top speed of Mach 2.8 and a service ceiling of over 20 kilometers, the MiG-31 is an ideal platform for such missions.

The 293 missile and its apparent successor (328) could potentially also be used to launch other small military satellites, as a rapid response to a possible attack, a capability that the USAF has long sought without much success.

During the last world war, the Italian state abandoned thousands of ascari (Eritrean fighters) who ...
54
Read

In the 25 November 2019 incident, when a Tigre attack helicopter and a Puma transport helicopter collided ...
1952
Read

The head of naval operations, the adm. Mike Gilday and members of the United States Congress, during the Symposium ...
1509
Read

On December 25, 2020, in Severodvinsk, the Zvezdochka Ship Repair Center, a subsidiary of United Shipbuilding ...
4054
Read

What will the submarines of the third millennium be like? A project of ...
4479
Read