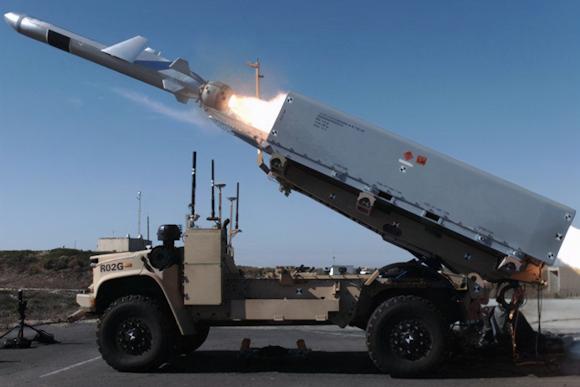 A Marine Corps remote-controlled anti-ship missile launch system struck and sank a moving ship during a drill near the Gulf of California.

The commander of the Marines, General Berger, stated that the tests carried out on the JLTV 4x4 (Joint Light Tactical Vehicle) gave a positive result.

The Marines have long started the GBASM program (Ground-based Aunt-Ship Missile) aimed at embarking the NSM missile (Naval Strike Missile) of the Norwegian Kongsberg, capable of hitting both naval and land targets (country-attack).

The platform unmanned JLTV would allow the rapid deployment of the system at great distances and then project the counter-denial capabilities (breach A2 / AD defenses), within the range of the NSM missile, credited to approximately 185 km.

The Marine Corps is undergoing massive reform after two decades of ground warfare (boots on the ground) in Iraq and Afghanistan. The plans of the Berger Force Design 2030 provide that the Corps will retire heavy vehicles, like tanks, For prepare for naval operations. These plans are aimed at countering the growing Chinese threat in the South Pacific. MBTs (M-1A1 Abrams Books) and towed single-barrel artillery pieces (M-777) do not adapt well to the future threats that the Marines will face in the Pacific. 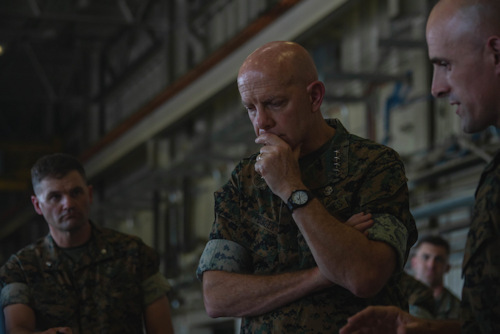 According to Berger (photo), the Marines will need long-range missile systems and low-tonnage but heavily armed amphibious units.

In fact, the Corps has already announced its intention to acquire the Maritime Strike Tomahawk GLCM (Ground Launched Cruise Missile), credited with a maximum range of 2.500 km. The missile is being developed for the US Navy by Raytheon, with a new multimodal seeker (IIR and RF), which will allow the Tomahawk to engage naval targets in motion.

The new missile will grant the Marines the ability to further extend the bubbles of counter-denial. It is not yet clear what type of launcher will be adopted, it will probably be a launch system based on a wheeled vehicle, very similar to the Gryphon TEL (Transporter Erector Launcher) equipped with 4 tubes.

Returning to the vehicle unmanned JLTV (equipped with the NSM missile), there is no doubt that this platform could also be positively evaluated by the Navy, perhaps to equip the Landing Force. Given also the poor anti-ship capabilities of our units, being able to embark on an amphibious ship, such as the Trieste or the future LPD, a missile system capable of engaging both naval and land targets, would significantly increase the Navy's attack possibilities.

The director of the Kredmash mechanical plant in Kremenchuk would have confirmed (source Komsomol'skaja Pravda) that ...
3428
Read

On June 6, with two separate ceremonies at the Fort Wainwright and Elmendorf-Richardson bases, she was reactivated in ...
7929
Read

For a long time, Difesa Online has emphasized the importance of acquiring (and maintaining) artillery pieces, monotube and ...
21491
Read

British Army Chief of Staff Sir Patrick Sanders says the invasion of Ukraine by the ...
11453
Read

During the last world war the Panzerkampfwagen V Panther, having solved the initial mechanical problems, was ...
26745
Read

The conflict in Ukraine has "distracted" the magazine in recent months from continuing to deal with issues relating to the ...
7169
Read