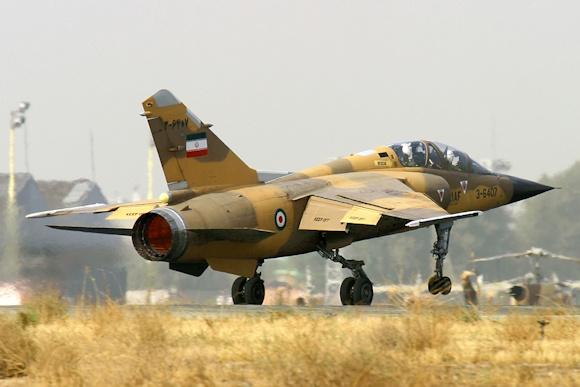 As already mentioned in the recent past, one of the elements that make the IRIAF (Islamic Republic of Iran Air Force) exotic in the eyes of external observers is the unique mix of aircraft of American, Soviet/Russian, Chinese, French and local origin that characterizes.

The French component of the IRIAF has a very interesting history, even if at times not well known to the general public. During the 60s and 70s, France courted the Persian monarchy over and over again in an attempt to establish itself in the political and military echelons of the Middle Eastern state and add it to the already large group of arms buyers that it transalpine republic boasted in Latin America, Africa, Oceania and in the Middle East itself.

Since Dassault's Mirages had already made a splash in the ranks of the air forces of the State of Israel and a number of Arab countries, the Parisian elite thought that Tehran too would soon succumb to Gallic flattery. However, the courtship did not produce anything concrete and the Iranians never disengaged from their "buy American" policy. For this reason, the French turned their attention to Iraq, a major enemy of Iran, which indeed proved, both before and during the Iran-Iraq War, an excellent customer for the Elysee.

During the grueling 8-year conflict, the Iranians managed to rely on the performance of their American-made F-5, F-4 and F-14 but also suffered heavy losses also caused by the mass use of numerous different types of Iraqi fighters among which the Mirage F1 stood out, at that time one of the jewels of the French aeronautical industries. Not only that, in addition to air-to-air use, the Mirage F1s also proved to be ductile and effective platforms for air-to-ground and anti-ship missions, a role in which they were able to excel thanks to the possibility of using the anti-ship missile AM39 Exocet.

In the days between 26 and 28 January 1991, while the air forces of the International Coalition devastated Iraq as part of the air campaign part of the operation Desert Storm, a large number of Iraqi civilian and military aircraft took off from their country's airports and landed in Iranian ones following an evacuation plan previously approved by the leaderships of Baghdad and Tehran. Subsequently, at the end of the conflict, the Iranians decided to take full possession of the Iraqi aircraft as compensation for the war damages that Iraq had not been willing to pay up to that moment. Among the aforementioned Iraqi aircraft there was also an important number of Mirage F1s which unofficial sources estimated at around 24-25 units belonging to the Mirage F1EQ-2/EQ-4/EQ-5/EQ-6 and BQ versions (the latter, operational conversion two-seater, the others single-seat fighter-bombers).

I said "unofficial sources" because Iran has never actually stated exactly how many Iraqi aircraft it took over in 1991, let alone the numbers for individual models.

After their arrival in Iran, the ex-Iraqi Mirage F1s were first parked in the open near the runways of the Tactical Fighter Base 3 (TFB3) Nojed located in Hamedan and for a time languished by the wayside. However, in 1993 Iran-Iraq War hero and inspired F-4E pilot and commander, Colonel Gholam Hossein “Behrooz” Naghdi-Beik decided to test fly one of the aircraft. Although he had no technical documentation and no previous training experience with the aircraft, the attempt was completely successful and his final response was enthusiastic and from that moment he became one of the main voices in favor of the introduction of all Mirage F1 in active service so much that in the upper echelons of the IRIAF he became known from that moment with the nickname of "The Mirage Whisperer" and helped to create the training and maintenance management manual from scratch.

In 1994 a substantial quantity of spare parts was purchased from Libya and other secondary sources and the IRIAF was also able to count on the help of technicians sent from Pakistan.

The work of restoring the aircraft to operational status was carried out partly in the IACI plants in Mehrabad and partly in TFB3 itself and, while in the second part of the year mass training of IRIAF technicians and pilots began on the new model, Colonel Naghdi-Beik led the first contingent of 9 Mirage F1 accompanied by their pilots and mechanics to their new destination: the not yet inaugurated Tactical Fighter Base 14 (TFB14) Imam Reza of Mashhad, in northeastern Iran, not far from the borders with Turkmenistan and Afghanistan.

Although it had been used by the Iranians since the 30s, up to that point the Meshhad base had not yet assumed any importance and during the Iran-Iraq War it had been used mostly as a "refuge base" to outside the reach of the Iraqi Air Force (IrAF) even if there is the possibility that it was used as a "stronghold" and "headquarters" for the "secret war" that Iran waged in the shadows against the Soviets in Afghanistan always in the 80s, but that's another story. In any case, still in 1994, the base lacked the most elementary infrastructures to operate even a single squadron of fighter-bombers.

Despite Naghdi-Beik's enthusiasm and pressure, the construction of the base's infrastructure proceeded extremely slowly and was only completed in 2009. However, the process of commissioning and deploying the Mirage F1s proceeded apace with the establishment by the end of 1995 of two squadrons: the 141o and 142o TF extension.

At this point, however, a problem arises. As mentioned above, almost all of the online and paper sources speak of the fact that the IRIAF received a total of 24-25 Mirage F1s of Iraqi origin. In hindsight, however, this number is simply too small to constitute two squadrons! Since its origins, in fact, the Iranian air force has always been "a weapon with Western DNA", and it remained so even after the Khomeinist Revolution of 1979 and the purchases of Chinese and Russian-made aircraft in the late 80s and early 90's. And for this very reason the Iranians have always operated according to the Western dogma that a squadron of fighter-bombers to be operational and effective must have between 18 and 24 aircraft available.

The practice of the Iran-Iraq War and subsequent decades has taught that if the number of aircraft falls below the minimum threshold of 18, then the squadron is disbanded and its jets distributed among the other squadrons. This is why the fact that the Iranians have created as many as 2 squadrons equipped with Mirage F1s is highly suspect and instead suggests the possibility that the aircraft of the aforementioned type that they have repaired in Iran are many more and estimated between 36 and 48 specimens . In any case, in the years following 1995, the Mirage F1s of the two aforementioned squadrons flew intensively performing both training and combat missions. Both the Iranian Armed Forces (Artesh) and the Pasdaran have in fact used the Mirage F1 on several occasions but also the EMB-312 trainers Toucan, the Bell AH-1J attack helicopters Cobra and domestically produced UAVs to support their troops and the men of the Police and Border Guards in the fight against the Taliban and drug traffickers (who have real armies equipped with heavy weapons at their disposal) throughout the border area.

As part of these operations, the Mirage F1s have carried out both reconnaissance operations along the borders Iran shares with Afghanistan and Pakistan as well as dozens of combat sorties against various Taliban positions and drug trafficking bases also located inside the territory afghan.

In August 2001, a Mirage F1BQ belonging to 141o TFS with General Nasser Habibi (commander of TFB14) and a young co-pilot at the controls was hit by a 9K34 type MANPADS Lightning-3 (SA-14 Gremlin in NATO code) shot by Taliban forces while engaged in one of these anti-drug missions. Habibi and the co-pilot managed to keep the plane in flying condition but upon landing the engine stalled and the two died in the crash of the aircraft, avoiding however that it could fall in the middle of the town.

In light of the intense operational use, in 2003 the Iranian Mirage F1 fleet was in a critical situation requiring a complete overhaul. Secret negotiations were opened with France for the purchase of spare parts and weapons. Initially Paris responded enthusiastically by opening the possibility of supplying Tehran with 140 second-hand Mirage F1s placed in reserve and over 1.000 air-to-air missiles, however pressure from the United States cut off any further contact. In 2004 the IRIAF was therefore forced to cease any operation with the Mirage F1s which were placed in semi-permanent reserve in Mashhad while, in response to the escalation of the situation in Afghanistan on 141o and 142o TFS were re-equipped with F-5Es recently returned to service and upgraded by the IACI.

Occasionally Mirage F1s were still used for limited training missions and celebratory parades, especially over Tehran and their career was thought to be virtually over until, in 2012, they too were affected by the massive upgrade program which the military leaders approved for a large part of the combat aircraft of the Armed Forces.

Specifically, the Mirage F1 update program, code-named "Project Habibi" (from the name of the aforementioned commander Habibi who died in 2001), which sees each of the cells subjected to two years of work at the Mehrabad plants, envisages a complete cycle of works for the revitalization of the fuselage, the installation of a new Iranian-made radar and the installation of new weapon systems, including cruise missiles with a range of 300 km. The aircraft thus recommissioned and upgraded are being transferred to the Tactical Fighter Base 10 (TFB10) of Konarak, at Chah Bahar, former headquarters of 101o tactical fighter squadron on F-4D. The first of two squadrons on Mirage F1s, the 102o Tactical Fighter Squadron it has already been declared operational and the second, whose name is not yet known, should become so in the near future.

The German Leopard 2 tank is one of the military vehicles requested by Ukraine to face the Russian offensive...
6729
Read

"While war is changing, France has and will have armies ready for the dangers of the century", these are the words of…
2830
Read

Germany stubbornly does not want to deprive itself of its tanks. Despite weeks of the campaign "Let's free the...
78821
Read

As international attention has been drawn to the war in Ukraine, tensions have risen in the Balkans…
4016
Read

On October 16, 2022, Chinese President Xi Jinping presented a report to the 20th National Congress of the Party...
4948
Read

In recent years, Russia has shown the West its technological advances in the military field through the…
48167
Read

On December 16th, with a statement that had actually already been in the air for some time, the Japanese Prime Minister Fumio...
8795
Read

Over twenty years ago, at the end of 2001, the then British Prime Minister Tony Blair supported the need to drop the...
13137
Read