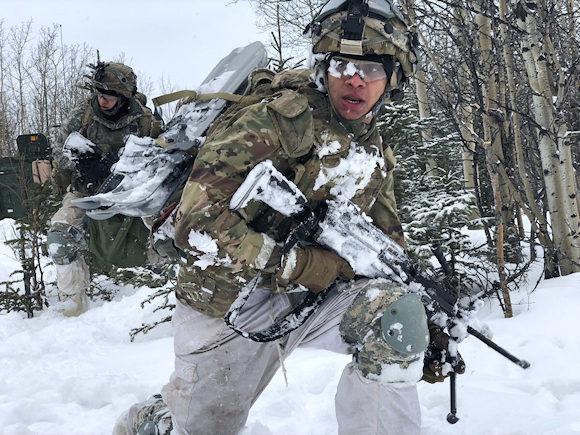 On June 6, with two separate ceremonies at Fort Wainwright and Elmendorf-Richardson bases, she was reactivated in Alaska on 11 June.a airborne division consisting of just under 12.000 soldiers.

L'11a division is back in business after its divestment following the Second World War where it operated mainly in the Pacific sector, first in the Philippine Liberation War and then in Japan (1945-1949). The unit was originally activated at Camp Mackall, North Carolina on February 25, 1943 and included the 511th Parachute Infantry Regiments, the 187th and 188th Glider Infantry Regiments, the 457th Field Artillery Battalion paratroopers and the 674th and 675th glider field artillery battalions.

In 1956 the division was moved to Germany for Operation Gyroscope and remained there until 1958. It was subsequently transformed into a training unit at Fort Campbell (Kentucky) and in 1963 it was restored to Fort Benning (Georgia), to test the assault tactics with helicopters only to be dissolved on 29 June 1965, transferring soldiers and crews to the 1st Cavalry Division.

Now the department is reborn and is called to operate in extreme climatic conditions and at high altitudes, will be equipped with new equipment and will conduct training for the fighting in the arctic environment in order to become the reference training for this type of activity.

This move by the United States is part of the strategy for the Arctic, "Regaining Arctic Dominance", developed in 2021, a year before the Russian-Ukrainian conflict which reactivated world attention to potential conflicts in the far north of the globe. The goal is to train, organize and equip the military to protect and defend their national interests but also to be able to respond adequately to potential conflict situations in those areas.

The Arctic, even with the increasing melting of the ice, has become a strategically relevant area not only for the United States but also for China and Russia. Greenland, for example, is a land to which the super powers look carefully for its strategic position and as it is rich in raw materials such as rare earths, oil and gas and in fact, already in 2020, President Trump had inaugurated a consulate in the Nuuk city.

The newly formed airborne combat unit joins the 82a airborne division in the east coast of the country (Fort Bragg, North Carolina,) and 173a airborne brigade in Italy, therefore, in several different geostrategic areas.

General B. Eifler, commander of 11a airborne division, announced during the inauguration ceremony that talks are underway between the commander of the US Pacific Army and Nepalese leaders to reach a cooperation agreement for joint training and also in order to take part in an expedition on Everest.

Firsta brigade will have, General McConville said at the inaugural ceremony, "A strong ability to air assault and to maneuver in arctic areas". Over the next few months the strykers of the brigade will be abandoned or assigned to other departments while more functional means will be acquired for the new needs.

It is certainly not new that aircraft of the Aerospace Forces of Moscow violate the airspace of the Scandinavian countries ....
1327
Read

Chinese soldiers will travel to Russia to participate in a series of joint exercises. To the maneuvers ...
16352
Read

It was known that Soviet, and later Russian, industrial and technological espionage (S&T) never really ...
14791
Read