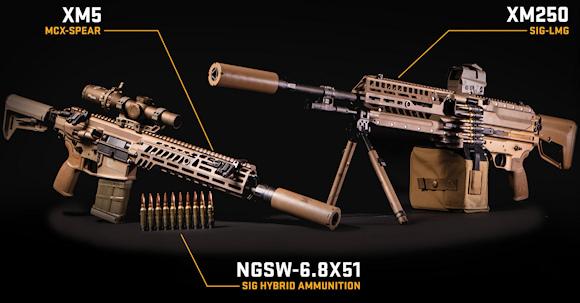 After more than two years of technical evaluation and scrutiny, the US Army announced the winner of the race for the New Generation Squad Weapon (NGSW): the Sig Sauer.

The Swiss / German firm had already imposed itself, for the supply of the new pistols for the American FFAA, with the M-17 and M-18 (P-320, read article), replacing the Beretta 92F (M-9).

The Sig's new guns will be chambered with 6,8x51mm caliber ammunition. The need for American soldiers to be able to use calibrated small arms with more powerful ammunition than the 5,56x45 NATO, it was evident from the earliest stages of operations in Afghanistan: the Taliban militias could have at their disposal weapons and ammunition (of ex-Soviet conception) capable of exceeding those supplied to Western forces in terms of power, penetration and range.

The shot uses a hybrid case, which is composed of a brass body and a stainless steel caseback. This ammunition will allow a clear improvement in ballistic terms against the 5,56x45 mm NATO and, in terms of initial speed (910 m / sec), also against the 7,62x51 mm. 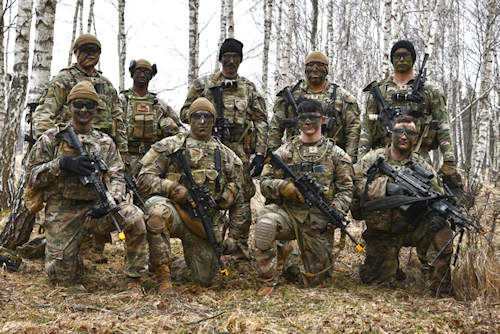 So the US Army infantry squad (on 9 elements), at least as far as the front line (Close Combat Force) is concerned, will be equipped with seven M-5s, two M-250s and two single-shot grenade launchers of the H&K M- 320 of 40x46 mm.

The second-line departments, at least for the moment, will still use the M-4 and M-249 carbines, with a further burden for logistics.

The British Army is very interested in Mrs.. In the near future, London plans to replace the L-85A2 / 3 and the Minimi, both in 5,56x45mm caliber.

The choice of the Americans will certainly also influence the other NATO armies, as did the 5,56 ammunition and even earlier the 7,62 ammunition.

We'll see if Beretta intends to produce a 6,8x51 caliber version of the ARX-200 and perhaps a LMG (Light Machine Gun) in the same caliber. OR, if Italy also decides to adopt the new caliber, MAYBE you can make a RACE, as it was done in the USA and France (to replace the FA MAS), instead of having to acquire obtorto neck the weapons produced by the Gardone Val Trompia factory.

As previously written, among the supplies of armaments sent by the Italian government, there are also howitzers / ...
61758
Read

To circumvent the limitations imposed by Congress, the Biden Administration employs its allies to provide ...
18755
Read

No war can be interpreted and explained through the "absolute" and necessarily abstracting lenses of ...
4341
Read

If it weren't serious, it would even be comical. People don't realize the significance and implications that ...
18469
Read

Reuters reports that the United States will provide Ukrainians with long-range anti-ship missiles. If that were to ...
45668
Read

One of the modern fields of study related to learning is the one known as "serious games". Let's start right away ...
2436
Read

Last month we witnessed the sinking of one or more Ukrainian Neptune anti-ship missiles in the Black Sea ...
37415
Read

The Russian Airborne Forces (Vozdushno-Desantnye Voyska rossii - VDV) - like the vaunted Spetsnaz, by the way ...
29409
Read

The supplies of military equipment by NATO and European countries to fighters continue in these days ...
26983
Read

The surprise attack of Bilohorivka will remain in the history of the Russian aggression war on Ukraine on the list ...
53833
Read