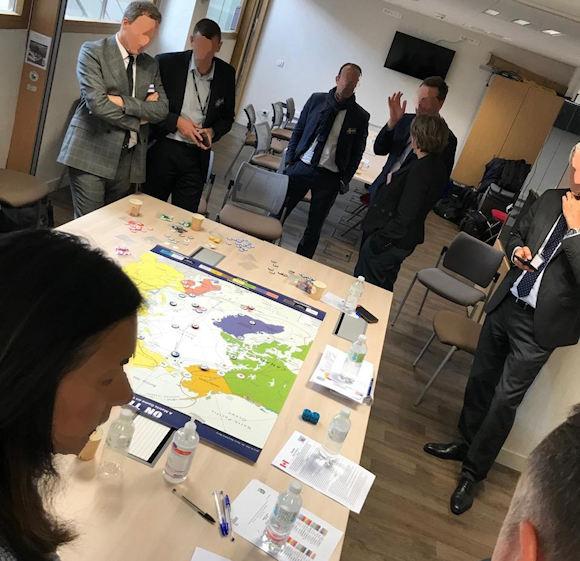 Some weeks ago we mentioned such as serious games (and among these i war games) can help to understand what is happening by facilitating the reflection and management of crises of a strategic nature.

In a recently read article, "Guide to serious games"by Marco Segatto, the possible ends of a serious game. In the same article you can also find many examples of serious game in various application fields, such as health, marketing, social issues, training and others. It must be said that I am amazed that in the article there is no mention of war games.

Again to talk about something I recently read a bit by chance, an interesting article on the "Game Developer" site: Serious War Games: Serious as Life and Death. In this article we talk about the importance of war games, within the serious game.

And then let's talk about war games.

In an article published a few years ago on Military magazine, "Doctrine, intuition and wargaming, a formula to be strengthened", by Aldo Monsellato, the author claims that wargaming is an excellent tool "to combine science and military art". It certainly cannot be a coincidence that the Italian Army has published Circular 7015 in which it describes the principles and their possible use as a decision support and as a formative and training tool. The same circulate describes "Immediate decision", as a useful tool to" stimulate the tactical talent of commanders "and of future commanders in particular, who with this tool can experiment without fear of making mistakes in decisions that could lead to heavy losses in terms of human lives on the field.

Here, then, is that, without fear of denial, i wargame I am fully part of the serious game and perhaps they are also the oldest ... perhaps it would be enough to rethink chess!

-  Serious Game Guide 2022: What they are, Examples, Application Areas (projectfun.it)

- The Little Army - The wargame club in Turin (wargametorino.com)

The director of the Kredmash mechanical plant in Kremenchuk would have confirmed (source Komsomol'skaja Pravda) that ...
3045
Read

On June 6, with two separate ceremonies at the Fort Wainwright and Elmendorf-Richardson bases, she was reactivated in ...
7866
Read

For a long time, Difesa Online has emphasized the importance of acquiring (and maintaining) artillery pieces, monotube and ...
21459
Read

British Army Chief of Staff Sir Patrick Sanders says the invasion of Ukraine by the ...
11415
Read

During the last world war the Panzerkampfwagen V Panther, having solved the initial mechanical problems, was ...
26728
Read

The conflict in Ukraine has "distracted" the magazine in recent months from continuing to deal with issues relating to the ...
7167
Read