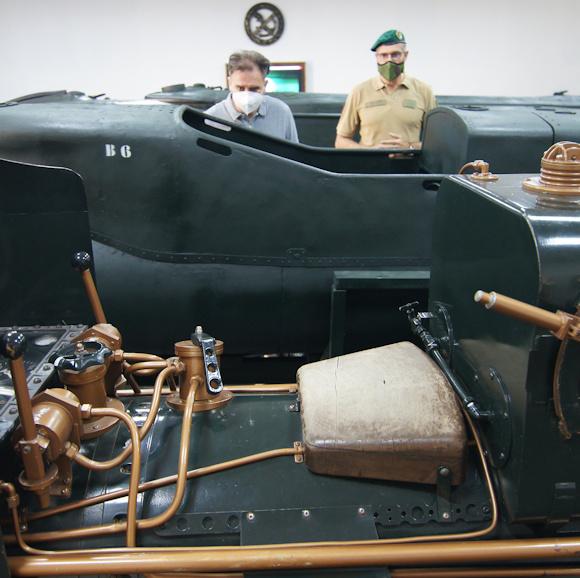 “The Soldier as such is at the service of the Nation and is extraneous to ideologies and partisan commitments; the feelings that move him are the love of country, the attachment to the flag, the cult of tradition, the spirit of the body, personal dignity. In the higher moral life implicit in his discipline and in his self-denial he feels the homeland as the unity, constant in time and space, from which every individual existence proceeds, and to it he consecrates himself. We all hope not to see the earth once again devastated by a general conflict, but we are sure that if such a test were imposed on peoples with an irrefutable history, and whatever the scope of the new weapons, the traditional virtues of the soldier would still be necessary. We know that from yesterday, back in time to the most remote ages, the category of military duty, accepted to the extreme limits of suffering and sacrifice, created a human type to be placed at the top of the scale of values. And if, in the general transformations that we have before our eyes, that type were destined to disappear, humanity would be impoverished "

(Extract from the book "Sailor life"By admiral MOVM Gino Birindelli, founding father of the COMSUBIN and the corps of the Navy Raiders)

Online Defense was visiting the Command Grouping Divers and Raiders of the Navy, at the Varignano Fortress, guests of Rear Admiral Massimiliano Rossi, commander of the Grouping.

Inside the base we were able to attend some training activities of the raiding students and visit the historic room of the department where vehicles and equipment used in past years are kept. We have also seen the GOI armory and the equipment supplied to the GOS, to which we will give an extensive description (even with unpublished videos !!!) in the next articles. 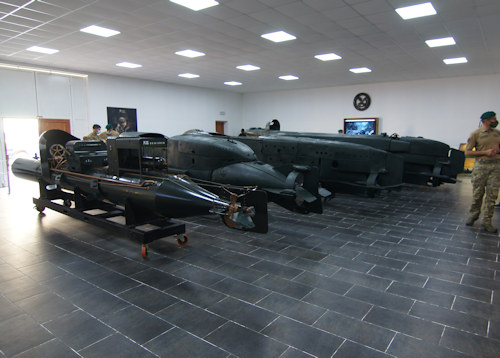 As many of our readers know, in the Peace Treaty, after the Second World War, there were clauses with specific prohibitions on the constitution by the Italian state of naval raiding departments. However, some "enlightened mind", within the Navy, secretly provided to set aside all those diving equipment in use during the conflict that, in the near future, could be useful. However, joining NATO in 1949 and the Cold War allowed the Italian Navy to overcome these limitations, thus reconstituting the naval raid department.

In the historical hall of Varignano we were able to see the underwater vehicles used by COMSUBIN from the post-war period up to the 70s. At the end of the war the Xᵃ MAS had not destroyed all its means, indeed some ended up in the hands of the Allies. On the island of Sant'Andrea, in Venice, some SSBs were recovered. After a review process they became efficient and were named Self-propelled Type A. at the same time the Navy also recovered some MTSM (Modified Siluranti Touring Motorboats) and SMA which were reconditioned and named MEB. These means were used by the raiders (probably in infiltration operations along the eastern coast of the Adriatic) in the first half of the 50s.

They could be transported to the area of ​​operations using the war veteran MS 75 torpedo boat, which entered service with its sister ship MS 74 in 1943 and reconfigured for the transport of assault vehicles. The MS 75, under the Peace Treaty, had to be sold to the USSR in 1949, while the twin remained in service with the Navy until 1962. The Self-propelled Type A, was originally an SSB (Siluro San Bartolomeo) produced in the complex of the Officina Siluri San Bartolomeo, in La Spezia, in 1943. 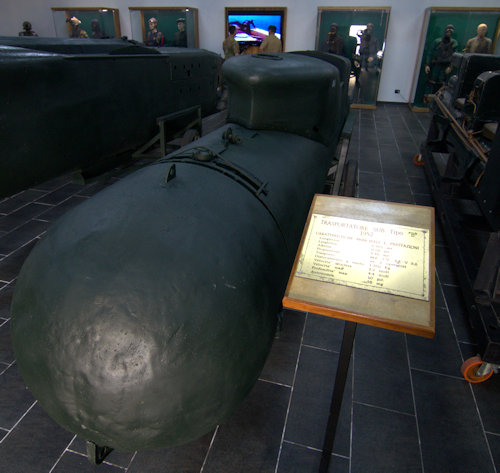 In 1952 the Self-propelled Type B, derived directly from Type A, with improved characteristics as regards autonomy.

The maximum operational depth reached 10 meters, with a full load range of about 50 miles.

The general architecture of the type B it was very similar to its predecessor but the line was more massive, as the overall mass had been increased to exceed 1.700 kg.

The warhead, on the other hand, had less weight as the probable targets would have had a lower displacement than in the past.

To improve silence, a very important factor in this type of operation, the two counter-rotating propellers (Type A) were abandoned in place of a four-blade wrapped in a protective ring, also aimed at improving the safety of the operators.

In the years following the end of the war, the strategic concepts regarding the use of naval assault vehicles began to change, given that the possibility of approaching an enemy base, without being discovered, became increasingly unlikely. For this reason it was decided to create a vehicle capable of navigating even on the outcrop, so as to be able to cover greater distances, and then to be able to dive close to the target.

A self-propelled machine was built with a shape more suitable for surface navigation, precisely to move more easily on the water surface and to be detected with greater difficulty by radar.

The new medium, called self-propelled Type C, had a range of 26 miles, a maximum operating depth of 30 meters and a submerged speed greater than 2 knots. 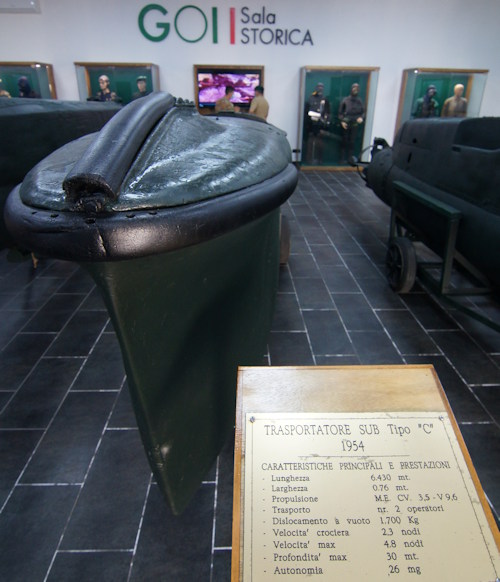 They arrived at Varignano in 1954, at that time the operational scenarios in which the raiders could have been employed were the coasts of Yugoslavia and Albania, in the latter country, specifically in Valona, ​​Soviet submarines operating in the Mediterranean made a stop.

The allocation of more conspicuous funds allowed the elaboration of new operational doctrines and, consequently, the possibility of adopting more technological means: it was realized the need to release the assault vehicles as far as possible from the objectives.

These new doctrines were applied to the means of the BIR series (from the initials of the then commander of the Raggruppamento Gino Birindelli).

The BIR 58 (entered into service in 1958) had a canoe configuration and was capable of carrying up to 4 raiders (plus the pilot). The propulsion was ensured by two motors: one electric and one thermal. The latter was silenced and underwater, in order to significantly reduce the acoustic trace. The total mass of the BIR 58 reached 1.500 kg, with a maximum cruising speed of 3,5 knots, while with the thermal engine it reached 4,5 knots (the operating depth was about 20 meters).

The procedure provided that a BIR 58 (in the following photo in the background) would approach, at night, an inlet on the eastern coast of the Adriatic, during the day it would remain hidden (left on the bottom in the bivouac), and then resume the action once darkness falls again. The biggest problems would have concerned the cold and weather conditions, since it was not possible to use the BIR 58 with a sea above state 3.

In 1960 a small self-propelled underwater vehicle was introduced, called TE (Elementary Transporter). In practice it was a "drag", or devices with the shape of torpedoes, with electric propulsion, which the operator clung to the rear with his arms. The craft was equipped with an electric engine capable of developing a power of 1,5 hp, allowing a maximum speed of 2,4 knots (autonomy of 60 minutes). The overall length was 2,15 meters, with a diameter of 425 mm, these dimensions allowed it to be transportable inside the torpedo tubes of the submarines supplied to the Navy (Classes Gato e Balao, former US Navy). 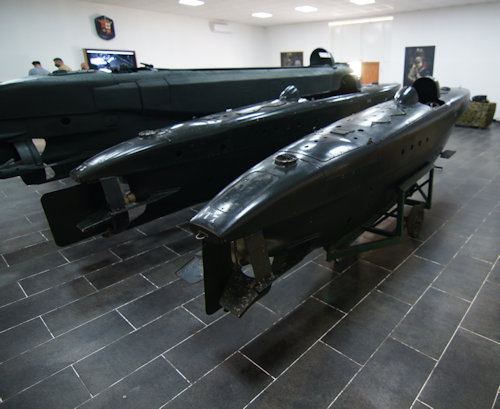 Subsequently, new TE models were developed, in single-seater and two-seater versions, which entered service between the end of the 60s and the early 70s of the last century, with the name TEC (in the photo, in the foreground the "mono" , in the middle the "two-seater").

The peculiarity of the new means also lay in the possibility of being air-launched. For this purpose, materials such as glass fiber were used, in order to have low weights and good mechanical resistance at the same time. The two-seater TEC had a length of 5,6 meters, propulsion was ensured by an electric motor capable of developing a power of 2 hp at 130 volts, reaching a maximum speed of 4,5 knots at a depth of 30 meters (l autonomy was just over 25 miles).

The TECs had a rear quad propeller, with a protective ring. The two-seater model exhibited in the COMSUBIN room has two small side rudders, probably to dive faster. Behind the compartment where the raiders took their places there was a container for explosive charges and other equipment.

Probably, some of these vehicles were air-launched, first by the C-119 and then by the C-130, with exit from the tailgate. After the launch of the TEC was followed by that of the raiders, however the maneuver was anything but simple as, despite the use of directional canopies, the craft landed at a certain distance (especially with the presence of strong winds) and, with darkness, it was certainly not easy to find it. Later, this infiltration system was abandoned, preferring to increase the aviation capacity at sea. 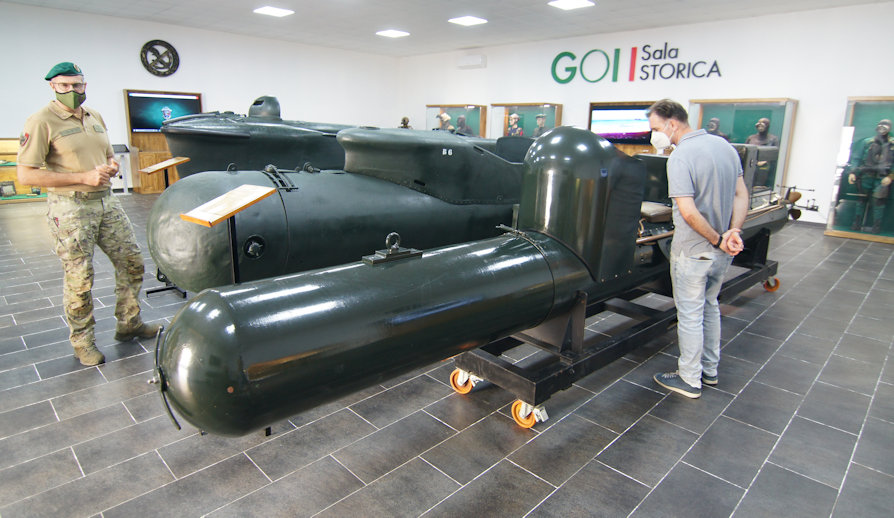 For a long time, Difesa Online has emphasized the importance of acquiring (and maintaining) artillery pieces, monotube and ...
588
Read

British Army Chief of Staff Sir Patrick Sanders says the invasion of Ukraine by the ...
5838
Read

During the last world war the Panzerkampfwagen V Panther, having solved the initial mechanical problems, was ...
24962
Read

The conflict in Ukraine has "distracted" the magazine in recent months from continuing to deal with issues relating to the ...
6791
Read

A few weeks ago we mentioned how serious games (and among them war games) can help to understand ...
1761
Read