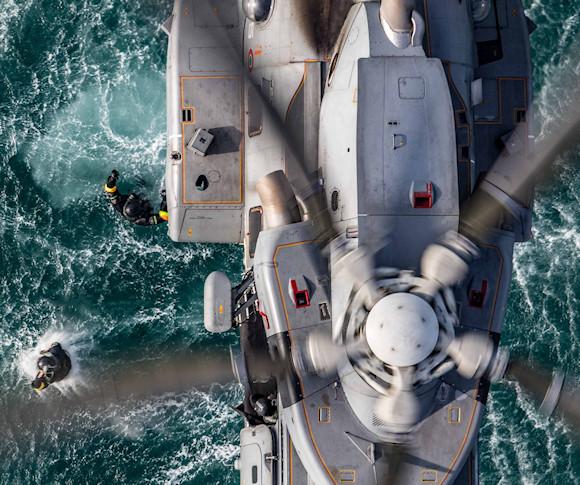 During the visit to COMSUBIN we had the opportunity to interview the commander of the Divers Group of GOS (Gruppo Operativo Underacquei), the frigate captain Giovanni Modugno, who explained to us the tasks that the operators, under his command, face every day and the equipment they have at their disposal.

The GOS operators carry out the delicate task of guaranteeing the safety of the naval units of the Navy, both in port and in navigation, through continuous checks to prevent any sabotage, including by explosives. An underwater detonation produces lethal effects at high distances (obviously in relation to the power of the charge) therefore, operating perhaps in conditions of absolute darkness, near the hull of a ship in port, requires high professionalism and steady nerves.

The first school for divers was established in Genoa in 1849 by General Della Bocca, then Minister of War and Navy of the Sardinian-Piedmontese Kingdom. With the unification of Italy in 1861, the young Regia Marina could thus dispose, among the first in the world, of personnel capable of operating below the surface of the sea.

In 1884 the first were issued technical and operational standards of the diving specialty and, in 1910, the School was moved to the Fortezza del Varignano area, where it is still located today.

With the two world wars the activity of divers intensified enormously, especially in the last conflict it became necessary to clean up the national ports from the countless bombs present as well as to restore the accessibility of maritime communication routes, obstructed by the ship sunk in the course of allied bombing. 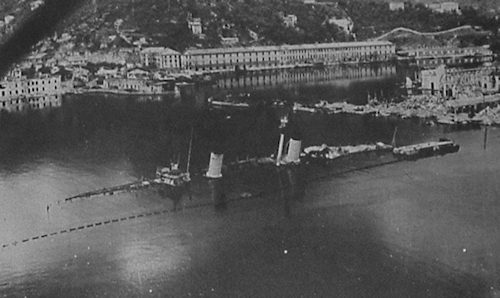 After the end of the Second World War, the reclamation and recovery activities by the underwater personnel of the Navy continued. To give just one example, in the La Spezia base, after the retreat of the German forces in 1945, there were over 300 boats sunk.

It is therefore thanks to the incessant work of the divers of the Navy that the Italian ports were able to become accessible again, thus allowing the arrival of goods essential for the survival of the population.

The reclamation of unexploded ordnance continues today, as a heavy legacy of the last conflict.

Once passed the course, the diver joins the GOS where, followed by expert personnel, he begins to familiarize himself with the diving equipment supplied to the department and acquire the first professional experiences in the field of underwater operations (such equipment ranges from self-contained breathing apparatus air ai rebreathers helium / oxygen mixture).

As the operator acquires more skills, he receives assignments of increasing responsibility and, at the end of this further integrative phase, is ready to be assigned to the diving departments. These are located throughout the peninsula, in order to ensure a widespread presence for the accomplishment of the institutional tasks of the Navy. 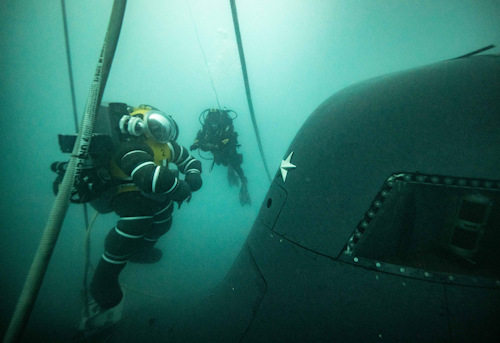 Specifically, the GOS operators can be employed in the Ready-to-Use Departments (RPI), as in the EOD (Explosive Ordnance Disposal) Nucleus, with the task of neutralizing bombs placed under water; in the Hyperbaric Nucleus made up of operators qualified to operate at depths of over 200 meters; in the SPAG Nucleus (Submarine Parachute Asistance Group), a department with unique capabilities in the Mediterranean basin, capable of air-launching at sea to rescue any shipwrecked submarines damaged on the bottom.

This capacity is guaranteed thanks to Nave Antaeus, a special naval unit equipped with modern and complex equipment to support deep diving and rescue submarines in failure, such as the mini-submarine SRV 300 (Submarine Rescue Vehicle) and the rigid articulated diving suit ADS (Atmospheric Diving Suit) a sophisticated "armor" which allows the operator inside to move underwater up to a depth of 300 meters thanks to thrusters.

Regarding the activities unmanned, divers, are qualified to use numerous types of wire-guided vehicles that can reach depths of 2.000 meters.

In addition, the GOS provides teams of divers on board minesweepers for the neutralization of naval mines. 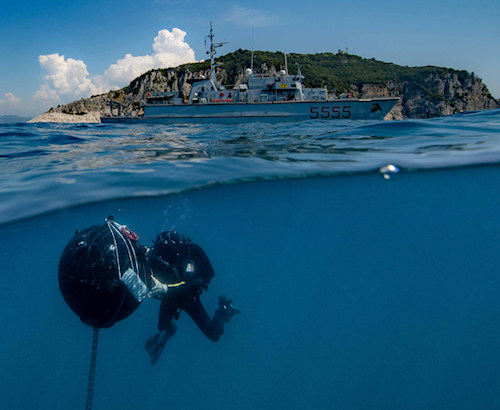 The GOS operators intervened in the Costa Concordia emergency and in the collapse of the “pilots tower” in the port of Genoa. They have also participated in most of the international missions of the Italian Armed Forces in recent years, such as in the Persian Gulf in 1987, in Albania in 1997, in the Arabian Sea during Enduring Freedom (2001-2006), Ancient Babylon in 2003, in Lebanon in 2007. , in the anti-piracy missions in the Indian Ocean (2007-2014) and in Libya in 2011.

The GOS represents a strength and an element of pride for the Italian Navy. In addition to the tasks listed above, divers ensure inspections of archaeological sites, thanks to the close collaboration established with the Ministry of Cultural Heritage and Activities and contribute to the activities of the Civil Protection, thus representing an important tool at the service of the community.

In the underwater field (but also in others) the COMSUBIN is at the top of the world and, given the level of difficulty of their work, the operators of the GOS can deploy capabilities that only a few other navies in the world are able to express.

This article presents technical, specific and "real life" information thanks to the collaboration of a former ...
21535
Read

Over the past twenty years, the US Special Forces (and beyond) have trained and operated in a context ...
6653
Read

According to various sources in the MENA (Middle East and North Africa) area, the armed forces of Cairo ...
2376
Read

The multinational exercise Bison Counter 24 was held in Sardinia from 5 October to 2021 November. Numerous Teams ...
2571
Read

“You are not a special department just because you have a glorious, epic past, nor is the adjective special enough ...
15166
Read

During the last operations in Afghanistan, Iraq and Syria the American forces, both conventional and special, ...
4099
Read

The United States is increasingly concentrating strategic resources in the South Pacific. It is certainly not a secret ...
4320
Read

The news of the creation within the CIA of a department dedicated to China1 did not surprise the ...
7055
Read