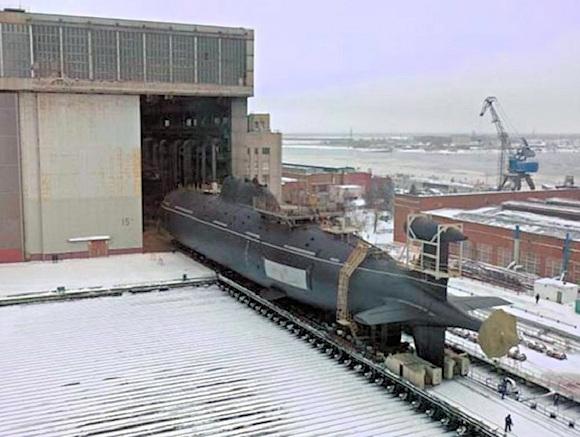 On December 25, 2020, in Severodvinsk, the Zvezdochka Ship Repair Center, a subsidiary of the United Shipbuilding Corporation, completed the restoration and modernization of the attack nuclear submarine Leopard (K-328) class Akula. The same day the boat was taken out of the yard to complete the work at the company's pier.

"The Leopard became the first third generation submarine restored and upgraded at the Zvyozdochka center as part of a program to maintain the nuclear-powered submarine component of the V-MF. The Zvyozdochka center and its subcontractors have made improvements by replacing electronic warfare, control systems, communication systems, navigation suites, sonar systems and a combat management system. In addition, the modernization of the Leopard will improve its weapon system equipment as well as crew comfort standards and a reduction of the acoustic track ". Admiral Nikolay Yevmenov said commander-in-chief of the Voyenno-Morskoi Flot

In 2013, then Navy Commander-in-Chief Admiral Viktor Chirkov said 12 nuclear-powered attack submarines would be upgraded, including six boats. Project 971 to be modernized a Project 971M as the Gepard (K-335). Modernized submarines will be able to fire cruise missiles Kalibr (NATO codename: SS-N-27) by replacing the Granat (SS-N-21).

This solution will allow an extension of the operational life of these vessels in order to preserve the operational capabilities of the nuclear attack submarine fleet pending the entry into the fleet of future Project 545 Laika, while I Project 885 / 885M Yasen will soon begin to gradually replace the Project 949A Antei, while the specimens of Antei more efficient are underway to accommodate on board, in addition to Kalibr, even missiles Turkish Onyx e Tsirkon.

The goal of the V-MF is to try to keep the underwater material inherited in the Soviet era efficient by trying to update it with new systems to keep them up to date while waiting for replacement with the most modern submarines in 1: 1 ratio. The Veprin fact, with the new update it is estimated that it will be able to navigate for at least another 25 years pending the arrival of the replacement Time expected around 2030.

When he was secretary of state, John Kerry had threatened Erdoğan to expel Turkey from NATO (despite not ...
1304
Read

During the last world war, the Italian state abandoned thousands of ascari (Eritrean fighters) who ...
3358
Read

In the 25 November 2019 incident, when a Tigre attack helicopter and a Puma transport helicopter collided ...
2270
Read

After Germany, Poland and Italy, Turkey's turn has come to lead the VJTF (Very ...
2536
Read