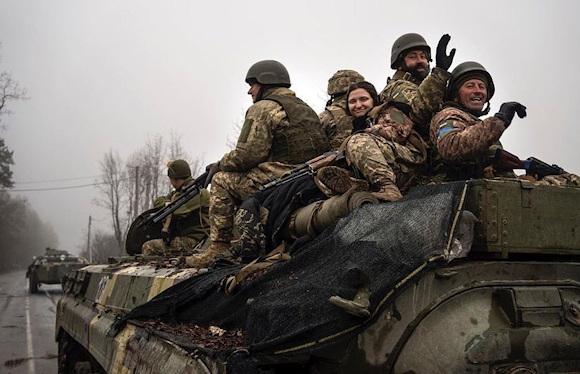 No war can be interpreted and explained through the "absolute" and necessarily abstracting lenses of theory. Yet, in the case of the war that Ukraine and Russia have been fighting since last February 24, it seems that we can speak under many aspects of a conflict that responds to the logic of the polemological thought of the Prussian general Carl von Clausewitz (1780-1831), confirming some of his affirmations .

In the case of the organization of the Ukrainian armed resistance to the Russian invasion, both in the first phase of the war (purely defensive) and in the current one (defensive-counter-offensive), the paradigms expressed by Clausewitz in "Vom Kriege" (op.or. 1832 , trans. it. 1942) about the Volksbewaffung (literally "armament of the people", translated as "people's war") seem to have influenced the theory and practice of the general staff of Kiev.

If, in fact, Clausewitz certainly cannot be considered a theorist tout court of the "people's war" as it was later understood both in Italy (with Carlo Bianco di Saint Jorioz and his “Of the national war of insurrection by gangs, applied to Italy. Treaty dedicated to good Italians by a friend of the country " of 1830) which then from both Soviet and Chinese Marxist schools of war certainly influenced a good part of the subsequent doctrinal approaches on Volksbewaffung.

For the Prussian general, the "people's war" must be considered as the consequence of the breakthrough that the war factor carried out through its artificial wall, that is, as an extension and reinvigoration of the process defined as "war". This breakthrough, therefore the extension of the war and its dynamics not only to the regular armies in the field but also to the civilian population and infrastructures, is the result of modernity, in the context of a process of transformation that began starting from the Napoleonic wars and went as far as to date. If modern warfare did not exist, which Clausewitz summarizes in the contribution that mass armies provide to the war effort, the use of territorial troops, compulsory military service (and also the extreme professionalization of the arms trade) and the system of requisitions , there would be no Volksbewaffung.

For Clausewitz the people's war, to be effective, must rest on some indispensable conditions which are: the defensive nature of the conflict; a particularly extensive war theater; the character of the people (which Hegelian could be called Volksgeist even without the political implications related to it); a difficult practicability and accessibility of the country that was the theater of war. All these conditions can be found in Ukraine in 2022.

The general staff of Kiev managed to organize a capillary resistance on a large scale to the Russian invasion, also by promoting the process of militarization and regularization of the voluntary units. The Ukrainian voluntary militias that arose during the Donbass war in 2014-2015 almost spontaneously, were then armed, supported and framed by the government of Kiev, to become, today, an integral part of the regular Armed Forces as battalions or regiments of motorized infantry ( the best known in the chronicles is the former battalion, now a regiment, of mechanized infantry Azov).

In the war of 2022 the high number of civilian volunteers who, upon the entry of the Russians into the country, asked to be enlisted in the Teroborona (Syly terytorial'noї oborony - Territorial Defense Forces), pushed the generals of Kiev to implement a general militarization of these elements, so as to quickly frame them and be able to use them with territorial and mobile functions, in support of the regular forces, and also with purposes of assistance and support to the civilian population.

The Teroborona is the heir of the volunteer battalions of 2014-2015, theorized at the time of the transfer to the regular forces of the latter, it was established on January 1, 2022 in implementation of the law "on the foundations of national resistance", passed by the Zelensky government at the end of 2021, which imposed an increase in the personnel of the Armed Forces of 11.000 units and the reorganization of the old territorial defense in the current Territorial Defense Forces.

According to the National Resistance Act the Teroborona was supposed to carry out auxiliary missions behind the lines of the regular army. Structured on a regional basis, the Teroborona was mobilized at the time of the Russian invasion of February 24 and immediately thousands of civilians applied for enlistment. On March 6, the total number of volunteers enrolled in the Territorial Defense Forces was 100.000, not counting the foreign volunteers framed in the International Legion for International Defense of Ukraine, which is a full member of the Teroborona.

When the Russian grip on Kiev seemed to be able to invest the capital, the Ukrainian commands distributed 18.000 firearms to citizens who had requested them, placing them in the ranks of the Teroborona. In short, that "correct view of war, capable of rising above mediocre artisan maxims" of which Clausewitz spoke in 1809 in his writings on Machiavelli's "citizen-soldier" (Ein ungenannter Militär an Fichte, als Verfasser des Aufsatzes über. Machiavell), has effectively spread among civilians in Ukraine, "becoming the patrimony of every citizen".

If a fractional resistance cannot produce strategic effects, it is also true that popular forces framed and led by officers of the regular forces (in Clausewitz's thought the "sniper" is in fact always framed by officers of the regular forces and fights against an external enemy in the area of ​​a defensive war), can guarantee the Ukrainians the achievement of some "tactical adjustments" along the front, functional then also to the strategic aims of the war.

In the context of the Ukrainian war effort, the territorial forces clearly have a "slimming" function for the Armed Forces, which, in order to be effective against the Russians, need to use all available resources in combat, without deducting any for secondary purposes. . Not for this, however, the troops of the territorial defense, mainly light infantry units, were not deployed on the front line; indeed, very often they actively participated in the battles of this war.

It is evident in this case that the Ukrainian Armed Forces, especially as regards the voluntary and territorial departments, have been reorganized and go into battle not following only and exclusively the principle of bloße Einrichtung (simple structure and therefore technical and abstract organizational configuration), but giving ample space to Spirit typical of militias. And this type of reflection, applied in practice in the Ukraine of 2022, is found in the three articles published by Clausewitz in the magazine "Minerva" in 1807 (Historische Briefe über die großen Kriegsereignisse 1806) relating to the war of 1806-1807 between France and Prussia.

The "ancillary" function of the territorial forces with respect to the front line forces, which makes the Ukrainian one a "people's war" but "militarized", is fully placed within the logic of the original thought of Clausewitz, deviating, instead, from its re-elaborations twentieth century operated by the Russian-Soviet and Chinese schools to which, moreover, the doctrine of the Prussian general has provided the intellectual backbone. Under this specific aspect, albeit fought with rocket launchers and drones, the Ukrainian “people's war” is purely nineteenth-century since it does not conceive of any other strategic objective or any other political purpose other than those established by political and military decision-makers, therefore by the state.

The keystone of the successes obtained by the Teroborona in battle is not linked to the mass enlistments - which in any case, having reached the optimal operational capacity of each brigade, have been diluted - but to the immediate classification of the voluntary troop, thus anticipating that which for Clausewitz is a condition that occurs only at a later time in the "people's war" which, before being well exploited by regular commanders, develops almost spontaneously thanks to "management" errors on the territory occupied by the invading army . Process favored, in this case, by the very tactics of the Ukrainian army, which is fighting - with the exception of large scale clashes - a "guerrilla war" and this occurred both in the defensive battles at the beginning of the war and in the current defensive-counter-offensive scheme in the Donbass (where around mid-April it seemed as if the Ukrainians were maneuvering along internal lines) and along the coast.

The strategic thinking of NATO, strongly influenced by the neo-Clausewitzian theories, led to the transformations of the doctrine of the Ukrainian Armed Forces after the war in Donbass, imposing a nineteenth-century character on a conventional XNUMXst-century conflict such as the current war in Ukraine, effectively prompting the Russians to revise the war plan and in a sense their priorities on the theater of operations.

Criticized in recent years and considered as the theoretical-doctrinal cause of the (political and therefore also strategic) failures of the USA and its Western allies in the world, not least the withdrawal from Afghanistan, in Ukraine these days the theory neo-Clausewitzian, which places the "unlimited concentration of power" in the war between sovereign states, seems to have regained vigor. The anti-Clausewitzian theorists of the caliber of David Kilcullen (2009), who had defined the "force-to-force" war, therefore the high-intensity conventional confrontation, as an element of the past, have been denied, openly criticizing Goldenstein's thesis and Jacobwitz (1996) on the increase in intensity and speed of combat due to the technological revolution. Just as many Western major states (above all the French one) have seen their ideas on the return of conventional conflict confirmed as the basic element of the “war” phenomenon which, translated, is equivalent to a “return to the 800th century” in the XNUMXst century. And if it is true that Ukraine cannot, for obvious reasons, allow itself an "unlimited concentration of power" against Russia, under penalty of the loss of the resources essential to its own resistance, it can nevertheless conceive, on the basis of NATO doctrinaire, models of forces, armaments and strategies that make it possible to economize the number of victims among their soldiers. From this also derives the priority attributed to fire, better if stand off, with respect to the clash of the masses as instead conceived and implemented by the Armed Forces of the Russian Federation.

In this respect, which, borrowed from the strategy, is reflected in the tactical conduct of the operations by the Ukrainians, the Teroborona has played and is playing a fundamental role.

The director of the Kredmash mechanical plant in Kremenchuk would have confirmed (source Komsomol'skaja Pravda) that ...
1270
Read

On June 6, with two separate ceremonies at the Fort Wainwright and Elmendorf-Richardson bases, she was reactivated in ...
7607
Read

For a long time, Difesa Online has emphasized the importance of acquiring (and maintaining) artillery pieces, monotube and ...
21371
Read

British Army Chief of Staff Sir Patrick Sanders says the invasion of Ukraine by the ...
11321
Read

During the last world war the Panzerkampfwagen V Panther, having solved the initial mechanical problems, was ...
26665
Read

The conflict in Ukraine has "distracted" the magazine in recent months from continuing to deal with issues relating to the ...
7150
Read