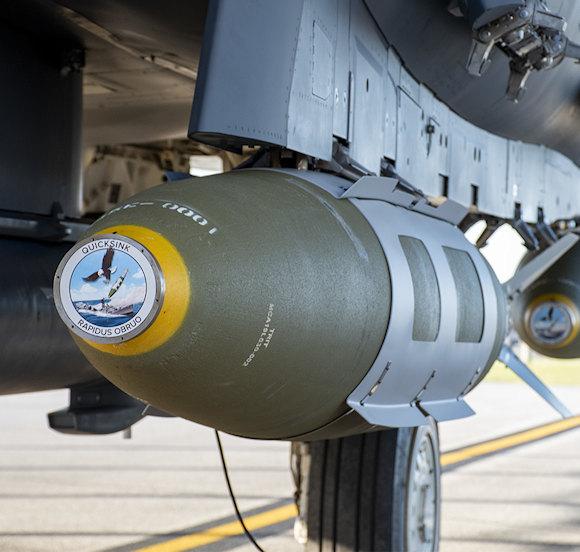 Last month we witnessed the sinking of one or more Ukrainian anti-ship missiles in the Black Sea Neptune, of the Russian cruiser Moskva.

Virtually all navies in the world have been equipped, for decades now, with anti-ship missile systems, which can be launched by naval units, submarines but also from the ground, using rotated vehicles as platforms.

However, these are complex and very expensive weapon systems.

The heart of the project is the development of Weapon Open Systems Architecture (WOSA), a new one seeker for the targeting of precision of surface naval units.

The test, which took place on April 28 (video at the bottom), saw an F-15E Strike Eagle drop a 31 kg GBU-908 JDAM bomb at a freighter off the Gulf of Mexico.

This is the second experiment of the Quicksink Joint Capability Technology Demonstration , a joint collaboration with the AFRL, the 780th test squadron of 96th test wing el '85th test and evaluation squadron of 53rd wing, financed byoffice of the under secretary of Defense for research and engineering.

The program, developed in collaboration with the US Navy, is aimed at providing new options for destroy surface naval targets at lower cost than a torpedo or anti-ship missile.

The GBU-31 (which contains approximately 430 kg of tritonal) struck the craft below the waterline, thus using the same attack profile as a torpedo.

As far as the driving of the bomb is concerned, this particular bomb combines the already existing package with GPS assisted inertial navigation system (INS) installed in the tail, with the new seeker mounted on the muzzle.

The Italian Air Force has acquired large quantities of GBU-31/32 bombs in the past. Given also the scarce supply of anti-ship missiles of the Navy and the decommissioning, which has now taken place for several years, of the missile Cormorant, launchable from Tornado IDS, the program Quicksink could be a valid solution to give the F-35Bs (but also the MC-27Js Praetorian) anti-ship capability.

The director of the Kredmash mechanical plant in Kremenchuk would have confirmed (source Komsomol'skaja Pravda) that ...
1363
Read

On June 6, with two separate ceremonies at the Fort Wainwright and Elmendorf-Richardson bases, she was reactivated in ...
7638
Read

For a long time, Difesa Online has emphasized the importance of acquiring (and maintaining) artillery pieces, monotube and ...
21379
Read

British Army Chief of Staff Sir Patrick Sanders says the invasion of Ukraine by the ...
11329
Read

During the last world war the Panzerkampfwagen V Panther, having solved the initial mechanical problems, was ...
26672
Read

The conflict in Ukraine has "distracted" the magazine in recent months from continuing to deal with issues relating to the ...
7152
Read