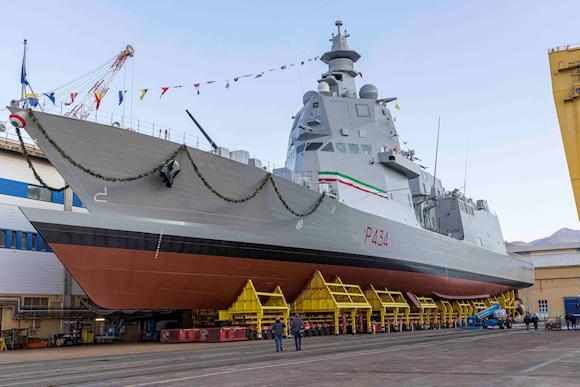 This PPA, which will be delivered in 2024, is the first in the "complete" version, that is equipped with the maximum defense capability, as well as the first in the series to mount the generators of Isotta Fraschini Motori, a subsidiary of Fincantieri specialized in the production of diesel engines.

The unit is part of the plan for the renewal of the operational lines of the naval units of the Navy, decided by the Government and Parliament and launched in May 2015 under the aegis of OCCAR (Organization for joint cooperation in the field of armaments).

The multi-purpose offshore patrol vessel represents a highly flexible type of ship with the ability to perform multiple tasks ranging from patrolling with rescue capabilities at sea, to Civil Protection operations, as well as, in its most equipped version, from a former fighter ship. line. For the seven units of the program, in fact, different combat system configurations are foreseen: starting from a "light" one, relating to the patrolling task, integrated with self-defense capabilities, up to a "complete" one, described previously. The patrol boat is also able to use fast boats such as RHIB (Rigid Hull Inflatable Boat) up to a length of over 11 meters by means of side cranes or a launching ramp located at the extreme stern.

The Multipurpose Offshore Patrol Vessels will be built at the Integrated Shipyard of Riva Trigoso and Muggiano, with deliveries scheduled until 2026.

Drones to transport drugs, plasma, organs and medical devices. Lazio is one of the first Italian regions to ...
36
Read

On the occasion of the twenty-year operational anniversary of the Joint Organization for Cooperation in the field of Armaments (OCCAR ...
95
Read

PZL-Świdnik, the Polish company wholly owned by Leonardo, obtained from the Ministry of Defense of ...
962
Read