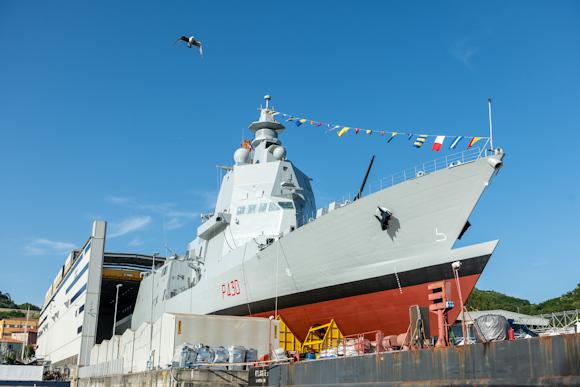 The godmother of the ship was Irene Imperiali, nephew of Admiral Paolo Thaon di Revel.

This PPA, the first of seven units, will be delivered in the 2021 and is part of the plan to renew the naval units of the Navy decided by the Government and Parliament and started in May 2015 ("Naval Law").

The multipurpose highland patrol is a highly flexible type of ship capable of carrying out multiple tasks ranging from patrols to rescue at sea, to Civil Protection operations, and, in its most equipped version, by a first-class fighter ship line. Different combat system configurations are envisaged: starting from a "light", self-defense patrol task, up to a "complete", equipped with the maximum defense capability. In addition, the unit is able to use fast vessels such as RHIB (Rigid Hull Inflatable Boat) up to a length of over 11 meters by side cranes or a slipway located at the far stern.

The PPAs will be built at the Integrated Cantiere of Riva Trigoso and Muggiano with scheduled delivery for the first unit of the class in the 2021, while the subsequent ones will be delivered to the 2022, 2023, 2024 with two units in the 2025 and 2026.

Leonardo has announced the entry into service at the African Navy of two King Air 350ERs in Maritime configuration ...
1263
Read

GE Catalyst ™, the GE Aviation turboprop engine designed and developed from scratch in Europe thanks to the contribution of 6 States ...
2825
Read