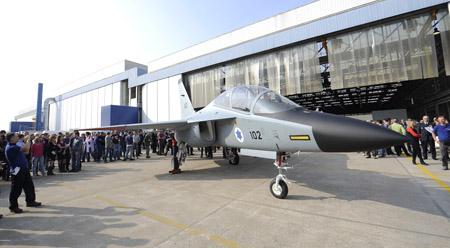 The first advanced M-346 trainer produced for the Israeli air force was presented yesterday during a ceremony held at the Alenia Aermacchi plant in Venegono Superiore.

In July, 2012, the Israeli defense ministry signed a contract with Alenia Aermacchi, a Finmeccanica group company, in collaboration with other Israeli and international companies, to supply 30 advanced M-346 jet trainers and related training systems to land. The aircraft are intended to replace the TA-4 Skyhawks currently in service.

The delivery of the first M-346 to the Israeli Air Force is scheduled for next summer.

This is a particularly important moment for Alenia Aermacchi who in less than two years signed the contract and rolled out the first aircraft to Israel: a result that testifies to the great teamwork achieved in close collaboration with its industrial counterparts. TOR and Honeywell. Recently, Poland also ordered M-346s, making it the aircraft's fourth-largest customer after Italy, Singapore and Israel. To date, a total of 56 M-346s have been ordered. The aircraft is already operational at the Italian and Singapore Air Forces. Source: Aermacchi