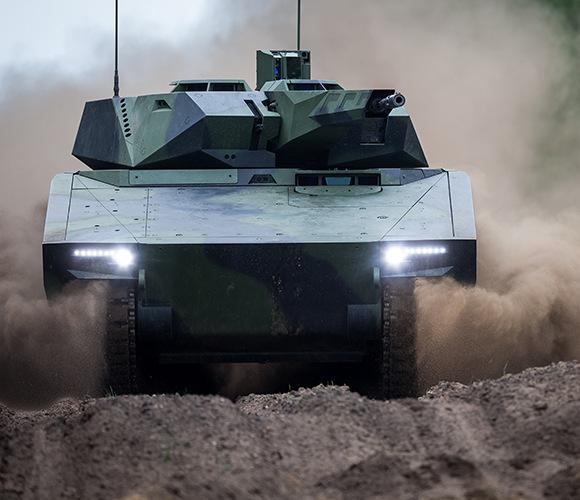 The German armaments giant has formalized the offer to Leonardo for the acquisition of 49% of the shares in OTO-Melara.

More than a financial operation, it could be a political-industrial move aimed at creating a terrestrial armaments pole, an alternative to Nexter / Krauss-Maffei. A game, therefore, that involves Berlin and Paris but in which Italy could also enter, thanks to the historic La Spezia factory producing artillery pieces.

It is certainly no secret that the heavy component of the Italian Army is in poor condition, with few efficient means and completely inadequate to the current operational scenarios.

Already last year, in a hearing of the Chamber's Defense Commission, Rheinmetall Italia had launched the proposal to replace the old Vcc-80 Dardo with the AIFV KF41 Lynx (photo), made on a private initiative by the German factory itself.

"The central theme we are talking about is the creation of an Italian pole of excellence through the consolidation of the national terrestrial sector, with the creation of national assets and European cooperations ". He had reported the CEO of Rheinmetall Italia, Alessandro Ercolani in a hearing in the Chamber. “The starting point of this strategic collaboration is the replacement program, to be implemented in a short time, of the Dardo. Where Rheinmetall and Italian industries can work on the Lynx platform. We can involve the entire national industrial sector, the Italian production quota can exceed 70% of the order value ".

Previously, Fincantieri had also expressed interest in a possible acquisition of OTO-Melara, however, the economic conditions did not exist.

International events, such as the conflict in Ukraine, are pushing Europe to create ever closer partnerships in order to be able to respond to governments' requests for armaments. Unfortunately, the European arms industry is backward compared to the Americans and the Chinese, the mergers between companies with a strong expertise in the arms production sector, therefore, could only improve competition, even outside the Old Continent.

The Italian armored forces, and not only, need a profound revision, this can only happen with political / industrial support. The domestic sector for the production of tanks lacks capacity and vision. Rheinmetall could provide that Know how we lack.

We can no longer repeat the mistake of wanting to build a national heavy tank (C-1 Ram), this time without running the strong risk of paying the consequences in terms of costs and human lives.

Precisely taking into account future operational scenarios, a more functional MBT should be aimed at. Rheinmetall unveiled a medium tank based on the armored fighting vehicle platform for infantry Lynx KF41, armed with LLR cannon (Light low Recoil) 47 mm L120 (capable of firing the latest generation DM11 ammunition). Such a solution would offer significantly higher performance in terms of mobility, firepower and protection than the C-1 Ram, with much lower costs. Domestic industry could participate in the program by providing the active protection system, APS, type trophy.

Also, we need C-RAM (Counter-Rocket Artillery Mortar) and UCAV defense. The Rheinmetall 35 mm automatic cannon using AHEAD ammunition, equipped with a programmable electronic fuze, each shot is able to disperse a very high number of tungsten cylinders which create a lethal area saturation both for drone swarms and for the artillery shells. This integration would allow the Italian SHORAD (SHOrt Range Air Defense) defense to be able to counter both conventional threats, such as attack helicopters and UCAVs, and asymmetrical ones, such as swarms of drones, rockets and mortar rounds.

In short, if the offer of the German company were to find the favor of the Italian government, the whole national terrestrial sector could only have an enormous benefit.