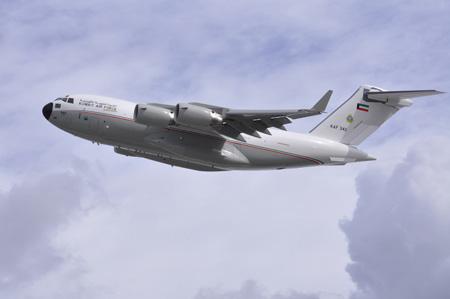 "The C-17 meets the special air transport needs of the Kuwait Air Force," said Colonel Abdullah Al Foudari, deputy commander of the Kuwaiti Air Force. "With this deck we can operate more effectively in transporting large loads over long distances, flying high in hot climates like ours and also being able to land on short, unpaved runways."

A custom paint job distinguishes the Kuwait C-17 from the other 259 delivered around the world.

"When this C-17 arrives to bring humanitarian aid and rescue people in need, they will know that the help came from Kuwait," said Colonel Abdullah.

Boeing has so far delivered 260 C-17s, of which 223 for the US Air Force, and another 37 between Kuwait, Australia, Canada, India, Qatar, United Arab Emirates, the United Kingdom and the 12 members of NATO's Strategic Airlift Capability initiative and the Partnership for Peace nations.