Home Industry In the defense cuts also the project & q ...

In the defense cuts also the "Soldato Futuro" project 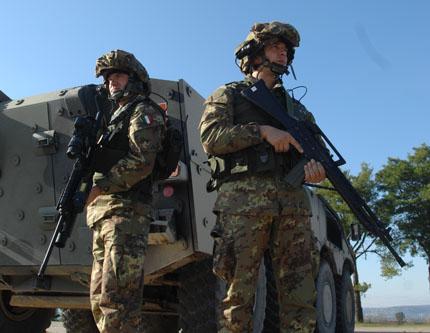 In the Renzi government's program, in addition to the decrease in the acquisition of the F-35, the cuts in defense will involve another project, where Italian technology represented added value.

Within the framework of developments in the NATO context, the Soldato Futuro program has been active for some time, whose mission is to give each individual military an absolute interoperability, both in the inter-force field and in multinational missions. The project includes integrated equipment that is based on the synergy between the soldier and his equipment, in order to make him skilled and in line with the new international scenarios.

Every single military officer is integrated into the automated Command and Control system and is included in the digitalization process of current and future operational contexts. The project enters the concept of a network-centric war, ie the transposition of the war theater into an IT context with particular attention to communications, therefore a system capable of receiving and transmitting information such as to facilitate a correct perception of the battlefield and of development, in real time, fighting.

The purpose of the Network Enabled Capability is to link different elements to a single network to achieve integration and the necessary interaction. The "Future Soldier" project, with an estimated cost of around 18 million, started in the 2002 with the aim of increasing infantry lethal and survival skills, is actually included in the NEC Force.

Mainly, the equipment consists of 558 lots that include clothing, protective equipment, new weapon systems such as the ARX-160 rifle, sensors and telecommunications equipment. Part of these investments will be recovered from the sale of the project to Russia, which decided to purchase the Italian technology developed under the program.

The Future Soldier also uses hi-tech materials in equipment, which are protective from enemy fire and adverse weather conditions.

It is made in three different configurations: "commander", "rifleman" and "grenadier rifleman".

The impact that this decision will have on the sector of the national defense industry and on the capacity of the Italian Army to remain in line with the multinational forces in present and future missions therefore remains to be assessed.

Once again, the government's disposition could involve the credibility of our Armed Forces and of the entire Italian system.