Home Industry Leonardo strengthens itself in the helicopter market ... 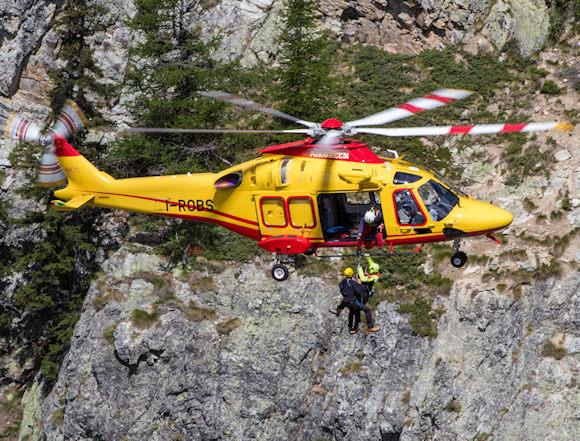 During the AMTC 2021 (Air Medical Transport Conference, Fort Worth, Texas, 31 October-2 November), an important exhibition dedicated to air rescue, Leonardo announced a further strengthening of its presence in the helicopter rescue market in the United States with new contracts . These latest sales confirm the constant growth in the presence of Leonardo's helicopters in the reference market in North America, with a fleet that today exceeds 100 units and consists of the AW119, AW109, AW169 and AW139 models. On a global scale, there are more than 650 Leonardo helicopters dedicated to search and rescue and health care tasks that save lives every day in more than 50 countries. Contracts announced at AMTC include two AW119Kx single-engine helicopters with IFR (Instrument Flight Rules - capable of operating under the rules of instrument flight) and an AW169 light intermediate helicopter for the Life Link III operator, as well as an AW169 intended for Intermountain Life Flight.

Life Link III helicopters will provide emergency medical services to patients in Minnesota and Wisconsin. This operator is the first in the United States to fly an IFR capable AW119Kx for helicopter rescue tasks. The new helicopters join their current fleet, which already consists of ten AW119Kx with VFR (Visual Flight Rules) capability. Delivery of the new AW119Kx IFR and AW169 helicopters is expected in 2022.

The IFR capable AW119Kx will allow pilots to operate safely, especially in consideration of the difficult weather conditions typical of the area. The AW119Kx is the ideal model for civil operators and those carrying out public utility tasks who intend to carry out missions in particular weather conditions by combining high performance and low costs typical of the single-engine helicopter. To this the AW119Kx adds the redundancy of all critical systems, the large cabin, the safety and reliability standards typical of twin-engine helicopters. The AW119Kx is the first single engine equipped with all IFR capabilities in decades and its success is growing among helicopter rescue operators in the United States.

The AW169 is equipped with a large cabin similar in size to the higher category models, with the ability to manage spaces in a flexible way, which allows access to the patient's body at 360 degrees, essential for care in critical conditions. In addition, the helicopter is equipped with the Auxiliary Power Unit (APU) mode, which allows the equipment in the cabin to remain in operation even with the rotors stationary. This makes the cabin a safe, quiet and comfortable environment that can also keep heating and air conditioning active if necessary. The presence of the AW169 in the US helicopter rescue market is growing at various operators in various states.

To date, approximately 360 AW119 and 250 AW169 have been sold to customers around the world to perform a wide range of tasks, including helicopter rescue, fire fighting, law and order, passenger transport, offshore transport, training, and government / military missions.

“Safety is at the heart of everything we do. The introduction of the AW119Kx IFR and AW169 support our transition to using instrument flight rules for patient transport and strengthen our fleet with state-of-the-art models and advanced capabilities. ", said Greg Thingvold, Life Link III's Vice President Aviation Operations. "Our new helicopters allow us to continue to respond to the constantly evolving needs of our patients, while ensuring the highest level of safety for our crews and for the recipients of our service".

"It is particularly rewarding when we can help a long-time customer to expand their fleet with helicopters with additional capabilities.", said Bill Hunt, head of Leonardo Helicopters in the US. "The recent result proves once more that our product is guaranteeing the best level of service to patients and the excellence required by operations of this type".

Operator Intermountain Life Flight (Intermountain Healthcare) has signed a contract for the first AW169 in North America equipped with the Full Ice Protection System (FIPS), with delivery scheduled for the end of 2024. This new helicopter it will make a significant contribution by enabling adequate patient care in critical conditions in flight, carrying out transport missions even in the harshest winter conditions and will be the first helicopter of this category with this capability in North America.

The FIPS system allows the AW169 to operate in the presence of the risk of ice formation when other helicopter models are forced to remain on the ground. The system heats the windshield and blades to prevent ice build-up and allows automatic detection and activation thus offering unprecedented mission capabilities in hostile environments and extreme weather conditions, ensuring maximum safety. The adoption of the FIPS system for the AW169 exploits the consolidated capacity of Leonardo in this field and already adopted for all the latest generation helicopter models belonging to the AWFamily, including the AW139 and the AW189. This system is in fact already optional for customers who request it on these models and for various tasks including rescue and is already used in various geographical areas.

"We are thrilled to add this helicopter to our fleet", said Kent Johnson, Director of Aviation Operations for Intermountain Life Flight, based in Salt Lake City. "The performance and safety features of this machine are exceptional and will be fundamental in the environmental conditions in which we operate".

"This is a significant milestone for Intermountain Healthcare and for the communities served by the operator", said Bill Hunt, head of Leonardo Helicopters in the United States. “The FIPS system allows for safer flights, ensuring that even missions in more remote areas can be completed during the winter months. We are really proud to partner with Intermountain Healthcare ".

With a longer range and more power than other helicopters in its class, the AW169 can cover a maximum distance of 816km, with a top speed of over 290km / h and reach an altitude of over 4400m. The latest generation avionics include an advanced autopilot, a modern night vision compatible digital cockpit with three large color screens. Several helicopter rescue operators have already chosen the AW169 for rescue missions around the world in different countries such as Italy, United Kingdom, United States, Norway, Switzerland, Japan, among others. Crews and maintenance technicians in the United States will benefit from comprehensive and advanced training solutions, digitized services and simulation for the AW169 through the new Philadelphia Training Academy.

Located in Utah, Idaho and Nevada, Intermountain Healthcare is a non-profit organization comprised of 25 hospitals, 225 clinics, the Intermountain Medical Group with 2.700 employed physicians and industry professionals, a division of health plans called SelectHealth, Homecare and other medical services. By helping people to live as healthily as possible, Intermountain is committed to improving community health conditions and is widely recognized as a leader in transforming healthcare by using results-based best practices to consistently deliver high quality services at sustainable costs. .