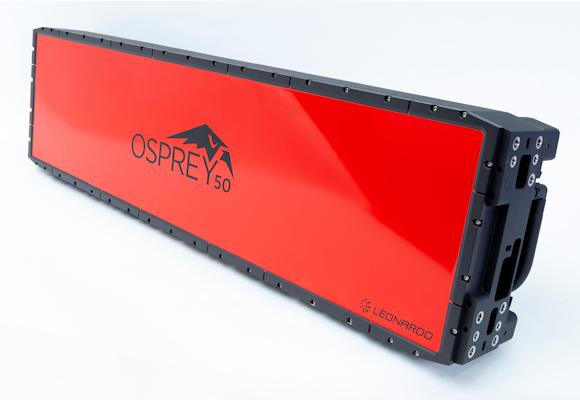 Leonardo's Osprey 50 Active Electronically Scanned Array (EASA), the new version of the Osprey surveillance sensor, carried out the first flight tests. The tests were conducted in support of product development activities, for which interest was already expressed by two customers: the first to install it on board an ISR (Intelligence Surveillance Reconnaissance) strategic platform, the second, Collins Aerospace , to integrate it into the TacSAR (Tactical Synthetic Aperture Radar) recognition system.

Osprey is a family of multimodal radars based on AESA solid-state technology and is the only system in its category currently available that offers full 360 ° coverage without moving parts. Among other advantages, this allows you to install the radar on platforms where a rotating antenna would not be suitable. The Osprey family has enjoyed considerable international success with orders received from 12 customers. Osprey 50 is the largest and most performing version, which offers enhanced performance for land, sea and air-to-air missions. It is ideal for medium to large aircraft that can provide the required space and power.

Osprey 50 is an evolution of the Osprey 30, a model with a solid market position, available in fixed and mobile panel variants, very popular on both traditional and remote piloted ISR platforms. Main features of the system are installation flexibility, competitive costs, advanced performance. Osprey 30 is installed on the US Navy's MQ-8C Firescout (called AN / ZPY-8) and on the Norwegian All-Weather Search and Rescue helicopter, Leonardo's AW101.

Leonardo reused the technology developed for the Osprey family to update the Seaspray electron scan surveillance radar family, allowing the latter to maintain a leading position in the market as long-range radar for maritime operations in the years to come. The signal processing techniques and hardware developed for the Osprey have, in fact, been reintroduced into the Seaspray to increase its performance and reduce weight.

Leonardo has announced the entry into service at the African Navy of two King Air 350ERs in Maritime configuration ...
1067
Read

GE Catalyst ™, the GE Aviation turboprop engine designed and developed from scratch in Europe thanks to the contribution of 6 States ...
2622
Read

Airbus and Singapore have decided to collaborate on the development of the A330 SMART Multi Role Tanker Transport (MRTT) for the ...
323
Read

Leonardo - global leader in the aerospace and security sector -, through its subsidiary Leonardo ...
275
Read

Leonardo signed a € 31,5 million contract with the European Space Agency (ESA) for the construction of ...
739
Read

Leonardo signed a contract with Lynwood (Schweiz) AG to acquire 100% of the Swiss helicopter company ...
1392
Read