Leonardo and Alpine Rescue: renewed the agreement for the joint development of new capabilities 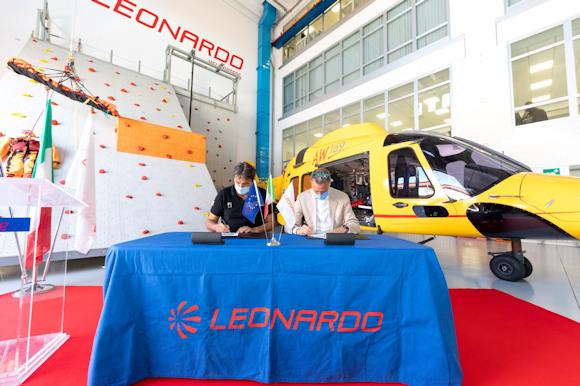 Improve the technologies used in saving lives and develop new operational and training solutions to make safety for the personnel more efficient and maximum. These are the objectives of the renewed agreement between Leonardo and the National Alpine and Speleological Rescue Corps (CNSAS), signed for the first time in December 2016 and re-proposed for the next three years.

The two realities, Leonardo and the CNSAS, are a reference - also at an international level - in the rescue sector in a mountain and impervious environment, where the helicopter is now a strategic resource for saving lives by completing the most complex missions. Also in this historical period: in 2020 the Alpine Rescue carried out the largest number of missions in the history of the Corps (over 10 thousand in a year) while Leonardo continues to constantly increase the mission capabilities of its latest generation products, AW139 and AW169, in terms of equipment and performance, and support and training services for healthcare and emergency workers. As a further challenge, the fight against Coronavirus influenced everything, with the helicopter protagonist of numerous transport missions with special stretchers with biological containment, used for the first time in Italy and in the world on Leonardo's civil air ambulances.

At the signature event, which took place close to the opening of the summer season at the Leonardo plant in Sesto Calende (VA), home of the main Training Academy of the Company where personnel assigned to helicopter rescue tasks are also trained from all over the world, the leaders of the CNSAS and Leonardo's Helicopters division took part.

Ambitious goals. The document strengthens a collaboration that has already existed in the field for years, since the staff of the Alpine and Speleological Rescue began to operate on board the helicopters produced by Leonardo. The three-year and renewable collaboration agreement provides for the establishment of a joint working group. This will favor an exchange of information aimed at a careful evaluation of the technical specifications of Leonardo's helicopter models dedicated to rescue, their mission equipment and cabin configuration, in order to further increase their efficiency and effectiveness. The two partners will also examine together the new techniques for the rescue and adaptation of helicopters to modern operational needs, as well as jointly developing the navigation, geolocation and mapping systems for the target. The training activities will also include techniques for using the recovery winch, in particular in combination with the use of the stretcher.

"The renewal of the agreement with Leonardo can only bring benefits to the entire emergency system and the field of civil protection in a broad sense - said the President of the Alpine and Speleological Rescue, Maurizio Dellantonio - The modern medical aid calls for the development of a multi-agency perspective, where specialized rescue forces are also able to interface with the world of research and industrial production, to guarantee citizens an excellent service ".

Gian Piero Cutillo, Managing Director of Leonardo's Helicopter Division, said: "In our Training Academy in Sesto Calende, representative of the collaboration path we embarked on together years ago, we strongly renew the shared commitment in the training of personnel assigned to delicate rescue operations through a single vehicle such as the helicopter, developing new solutions and ability to allow the air ambulance to perform its task better and better. We will work together on new projects that will allow us to bring the fruits of these synergies on board our products. "