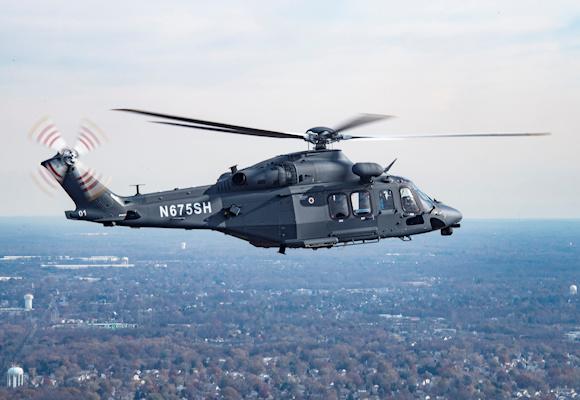 Leonardo and Boeing have delivered the first four MH-139A helicopters Grey Wolf, intended for testing activities, to the US Air Force allowing the operator to start the replacement of the obsolete UH-1N. Based on Leonardo's highly successful AW139 'dual-use' helicopter, the Grey Wolf is a multi-mission aircraft designed to protect ICBMs and carry US government personnel and security forces. In September 2018, Boeing was awarded a contract worth $ 2,4 billion for up to 80 helicopters, training systems and other support equipment.

"We are thrilled with the acceptance of the first two MH-139As by the US Air Force" said Clyde Woltman, CEO of Leonardo Helicopters US “This helicopter is well positioned to become an important US defense and security asset. I would like to thank in particular the integrated teams of Leonardo and Boeing for the tireless work and ingenuity shown and which made this result possible ".

The start of deliveries follows the completion of additional certification activities by the FAA - Federal Aviation Administration, necessary for the formal acceptance procedure of the aircraft. Boeing and the US Air Force will now proceed to conduct further development and initial operational testing to support the program.

"The Gray Wolf is a modern and versatile helicopter, capable of offering greater range, speed and range than the UH-1N it is replacing"said Mark Cherry, vice president and general manager for Boeing's vertical flight operations. "I am proud of our team which, together with our partner Leonardo, has enabled us to achieve this goal, a fundamental first step in the long series of deliveries planned for the Gray Wolf".

Leonardo produces the helicopter at its facility in northeast Philadelphia, while Boeing is responsible for the procurement and installation of military equipment and aircraft support after delivery.

A delegation of Segredifesa, chaired by the general of the army corps Luciano Portolano, general secretary of ...
1257
Read

Airbus Defense and Space has developed and tested a cargo system that allows you to carry military cargo ...
2064
Read

Leonardo and Engineering have signed a MoU (Memorandum of Understanding), starting a strategic collaboration for ...
224
Read

The Zeltweg Airpower '22 represents a real stage for Leonardo's helicopters and aircraft, with ...
7180
Read