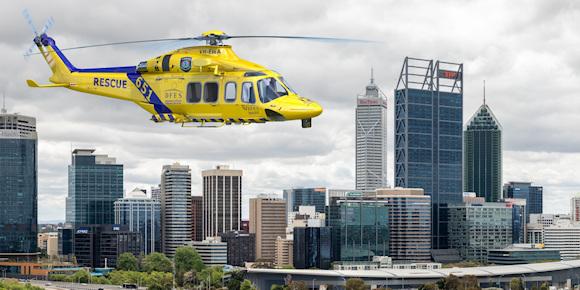 Leonardo announced today a further expansion of the AW139 twin-engine helicopter fleet in Australia with an order for three units, as part of the Emergency Rescue Helicopter Service (ERHS) program for the modernization of helicopter rescue services in Western Australia. The helicopters will be provided by the major operator CHC Australia to carry out a wide range of missions such as helicopter rescue, search and rescue and inter-hospital transport from Jandakot and Bunbury airports on behalf of the ERHS service.

The AW139s will be delivered from the Leonardo plant in Vergiate at the beginning of 2023 and will enter service in Western Australia during the year, after the customization activities that will be carried out locally. The new helicopters will be equipped with a wide range of dedicated equipment such as, among others, a modern autopilot and an advanced anti-collision system, search beacon, electro-optical system, cable cutter and recovery winch. The installation of the special configuration of the cabin for medical rescue tasks and the advanced mission console will take place in Australia.

This latest contract represents a further success for the AW139 in Australia, a model that is already the benchmark for helicopter rescue tasks in its category in the country. There are more than 130 helicopters of various types for civil, public utility and military tasks sold by Leonardo in the country to date, supported in the area by unique maintenance, repair and overhaul capabilities. The AW139 was chosen by several operators in Australia for multiple operational roles including rescue, security, offshore transport and government missions with a fleet of over 60 units in service today. The latest order also strengthens the regional collaboration with CHC which already employs ten AW139s and two AW189s. The worldwide AW139 fleet used by CHC has recently achieved a significant operating result exceeding 250.000 flight hours.

The AW139 is the largest helicopter program in the world since its certification in 2004 and the best-selling in its class, with orders for over 1250 units from more than 290 operators in over 80 countries for all missions. The AW139 offers unparalleled capability, technology and safety to meet the most complex operator requirements for carrying out missions in challenging conditions with maximum effectiveness. This model features state-of-the-art avionics with advanced navigation and anti-collision systems to increase operational awareness and reduce pilot workload. It is also unrivaled in speed, power margins and overall performance and features the largest cab in its class with high modularity for quick reconfiguration, plus the transmission's unique ability to continue running smoothly for over 60 minutes even in absence. of lubricant for even greater reliability and safety. Over 1000 mission kits have been certified for the AW139 to date.

Drones to transport drugs, plasma, organs and medical devices. Lazio is one of the first Italian regions to ...
29
Read

On the occasion of the twenty-year operational anniversary of the Joint Organization for Cooperation in the field of Armaments (OCCAR ...
80
Read

Leonardo and Aeroporti di Roma announced, on the occasion of the World ATM Congress which has just ended in Madrid, ...
256
Read