Leonardo: contract from 300 million for the supply of thirteen M-345 to the Italian Air Force 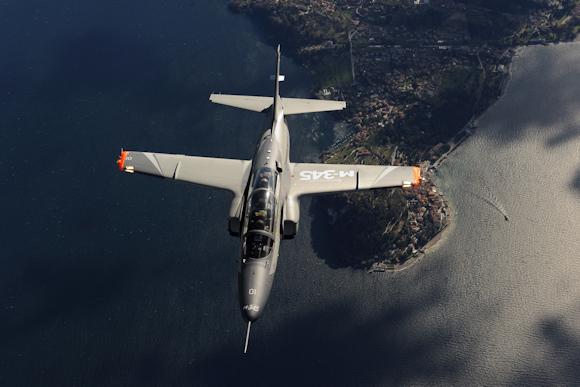 Leonardo signed yesterday with the Aeronautical Armaments Department and for the Airworthiness of the Ministry of Defense the contract for the supply of the second lot of the integrated training system based on the M-345 HET (High Efficiency Trainer) aircraft. The agreement provides for the supply of thirteen aircraft, ground-based training and simulation systems and five-year logistical support for a total value of 300 million.

Alessandro Profumo, CEO of Leonardo said: "the signing of this additional contract for the M-345 is the result of a constructive dialogue between the industry and the Ministry of Defense that led to the definition of needs and identification of the best technological solution. As announced in our business plan, we are developing the training sector both in terms of platforms and ground systems, and in terms of services. Thanks to the fruitful collaboration with the Defense and the gradual introduction of the M-345, Italy will be able to count on a highly advanced international flight training school for military pilots ".

Lucio Valerio Cioffi, Head of the Aircraft Division of Leonardo, said: "the M-345, thanks to its performance and the advanced integrated training system, will allow the Air Force a significant improvement in training efficiency, greater efficiency and a reduction in operating costs. The new planes, whose first delivery is scheduled for the 2020, will integrate the fleet of eighteen M-346 used for the advanced stage of the training of the pilots of the Aeronautics at the Galatina Air Force Base (Lecce). Military".

The Italian Air Force has identified a requirement up to 45 M-345 (whose Armed Forces identification code is T-345A) to progressively replace the 137 MB-339, entered in line starting from the 1982, and also to represent the new platform of the National Aerobatic Patrol (PAN).

The M-345 has already aroused the interest of many Air Forces around the world. The first production aircraft carried out its first flight last December 21 expressing excellent performance.

Leonardo has announced the entry into service at the African Navy of two King Air 350ERs in Maritime configuration ...
1259
Read

GE Catalyst ™, the GE Aviation turboprop engine designed and developed from scratch in Europe thanks to the contribution of 6 States ...
2814
Read

Leonardo - global leader in the aerospace and security sector -, through its subsidiary Leonardo ...
281
Read