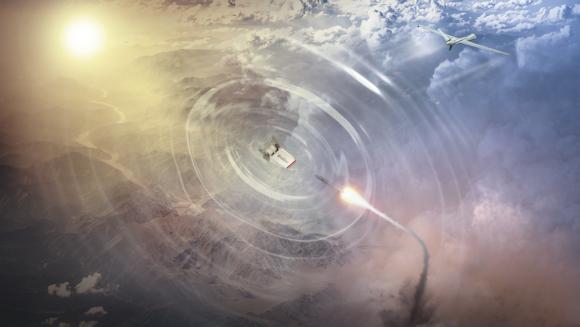 A series of BriteCloud launches have already been made from an MQ-9 as part of an aircraft survival test, designed to manage the safe release of the decoy from the platform's new self-protection pod. Further live evidence could be added to show that BriteCloud can effectively protect the drone from the most advanced radio frequency threats.

BriteCloud is a next generation device for the protection of aircraft. It is the first and only system of its kind in the world to have proven its effectiveness, incorporating a very small sophisticated jamming technology, which can be released from the aircraft as a flare. Designed and developed in the UK, the system entered service with the Royal Air Force after an extensive test campaign. Additionally, it is currently being evaluated with the US Armed Forces under the Foreign Comparative Test (FCT) program.

BriteCloud is available in different versions to suit different types of platforms. The BriteCloud 218 is the version compatible with the MQ-9 release system and can be integrated into US fighter aircraft such as the F-15 and F-16, while the BriteCloud 55 can be launched from 55mm dispensers of aircraft such as the Eurofighter Typhoon, the Saab Gripen E and the Tornado GR4. A third model, the 55-T, is under construction for transport aircraft and helicopters.

The decoy uses Digital Radio Frequency Memory (DRFM) jamming technology, considered the “top of the range” in protection from surface-to-air and radio-guided air-to-air missiles. Thus it is possible to detect and process incoming radar signals and, in response, produce and transmit a powerful electronic "phantom" signal that causes the radar to follow the countermeasure and not the aircraft.

Drones to transport drugs, plasma, organs and medical devices. Lazio is one of the first Italian regions to ...
33
Read

On the occasion of the twenty-year operational anniversary of the Joint Organization for Cooperation in the field of Armaments (OCCAR ...
88
Read

Leonardo and Aeroporti di Roma announced, on the occasion of the World ATM Congress which has just ended in Madrid, ...
261
Read