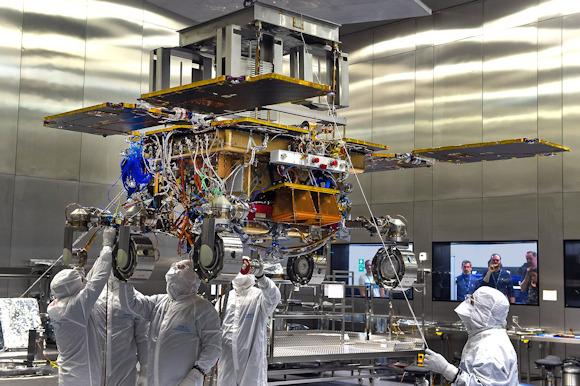 The ExoMars rover of the European Space Agency is leaving the UK to reach the Airbus site in Toulouse, where it will be subjected to a series of tests before delivery to Thales Alenia Space.

The ExoMars rover Rosalind Franklin will be Europe's first planetary rover and its assembly is currently underway at the Stevenage Airbus site. His mission will be the search for signs of past or present life on Mars and will be equipped with an 2 meter drill to take samples under the ground, which will have them protected from the difficult environment rich in radiation that characterizes the surface.

The rover has nine tools that will help scientists conduct a detailed exploration of Mars, initially on a panoramic scale and then progressively converge towards smaller studies (under a millimeter) and end with the molecular identification of organic compounds. The rover is equipped with an autonomous navigation system developed by Airbus that will allow it to travel between the sites of interest much more quickly than the remote driving in real time from the Earth.

The Rosalind Franklin is currently installed in its special protective container at Stevenage, ahead of the trip to Toulouse where the rover will be subjected to environmental tests in preparation for the launch. Should leave the Airbus site in the UK the 28 August. The launch of the rover in the direction of Mars is scheduled for July 2020.

Leonardo has announced the entry into service at the African Navy of two King Air 350ERs in Maritime configuration ...
1268
Read

GE Catalyst ™, the GE Aviation turboprop engine designed and developed from scratch in Europe thanks to the contribution of 6 States ...
2847
Read