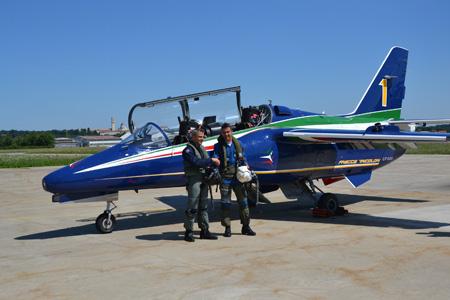 The 3 last July, at the production site of Alenia Aermacchi in Venegono Superiore (Varese), the commander of the PAN, major. pil. Jan Slangen, made his first flight on the avionic demonstrator M-345 HET (High Efficiency Trainer) of Alenia Aermacchi with the livery of the National Aerobatic Team, the famous Frecce Tricolori.

The M-345 HET will debut in the skies of the Farnborough Air Show, during the most important international showcase in the aerospace and defense sector, which will take place in London from 14 to 20 next July.

PAN commander Jan Slangen, who had just landed after his first flight - which lasted about an hour - on the M-345 HET avionic demonstrator, commented: "This is a very interesting machine, with a very high potential, both as a trainer basic than aerobatic aircraft. We took off from the Venegono runway to go to the operations area and, after some basic and acrobatic orientation maneuvers, we tried to set up a mini presentation profile with a sequence of maneuvers from our aerobatic program. Personally I am very satisfied the energy behavior of the aircraft, its maneuverability and particularly low consumption. Obviously it is still an avionic demonstrator, with some improvements to be made, easy to implement and already foreseen in the final development of the prototype. "