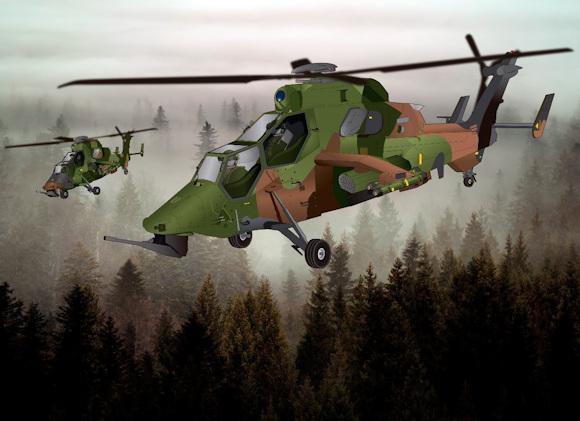 The Organization for Joint Armament Cooperation (OCCAR) on behalf of the DGA (Direction Générale de L'armement) for France and the DGAM (Dirección General de Armamento y Material) for Spain, awarded a contract to Airbus Helicopters for the development, production and initial support of the Tiger MkIII attack helicopter upgrade program.

The contract includes the upgrade of 42 aircraft for France (with an option for an additional 25) and 18 aircraft for Spain. The agreement also provides that Germany can join the program at a later stage. The first Tiger MkIII prototype is expected to take off in 2025. Deliveries will begin in 2029 for the DGA and in 2030 for Spain. Development and modernization of the Tiger will be carried out at the Airbus Helicopters sites in Albacete (Spain), Donauwörth (Germany) and Marignane (France).

The Tiger MkIII program will consist of a major upgrade of the European attack helicopter systems. The Tiger has proven in the field to be discreet, very agile and extremely resistant. Operators will continue to enjoy these benefits with the Tiger MkIII. The new standard will allow the Tiger to be fully connected within battlefield digitization systems. The Tiger MkIII will be able to take control of drones and share tactical data in real time. It will also be equipped with a renewed range of weapons (cannon, guided rockets and new missiles), as well as new sensors. The workload of the crew will also be reduced thanks to the new avionics that will allow them to focus on the mission.

Tiger MkIII standard configuration will include Safran's Strix NG aiming system integration and Thales FlytX avionics suite, Thales Topowl DD helmet with integrated aiming device, Thales global satellite navigation system, Indra IFF system upgraded and an inertial navigation system from Safran. The communication system will include Thales' Contact radio and a dedicated data link for exchanges with drones. For Spain, the program will also include L-16 data link integration and satellite communication capabilities. The Spanish Tiger MkIII will be equipped with a combat system supplied by Indra, while the French aircraft will be equipped with an ATOS system and Thales countermeasures. The French Tiger MkIIIs will carry MBDA's MAST-F air-to-ground missile and Mistral 3 air-to-air missile. For Spain, the new weapons range will include 70mm guided rockets and a new air-to-ground missile.

Airbus Helicopters is fully involved in supporting the Tiger fleet in service. In 2019, a trilateral agreement was signed with OCCAR to improve the availability of German, Spanish and French aircraft. This contract has already made it possible to increase the availability rate of the Tigers of the French army. The increase in availability rates is expected to continue in the coming months in Germany, Spain and France.

PZL-Świdnik, the Polish company wholly owned by Leonardo, obtained from the Ministry of Defense of ...
222
Read