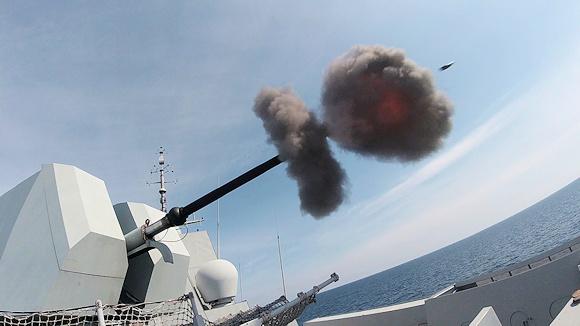 The effectiveness of Leonardo's new generation naval systems has been demonstrated in the field. The confirmation of Leonardo's advanced detection, tracking, communication, command and control capabilities of sensors took place during the ASD / FS21 (At Sea Demonstration / Formidable Shield 2021), the main air defense and anti-missile exercise in the field NATO, which this year took place from 15 to 30 May at the Hebridean Islands shooting range (Scotland, UK).

In an extremely realistic scenario, real and simulated contrasting activities were carried out against subsonic, supersonic and ballistic targets and, at the same time, the information transmission and interoperability capabilities between ships, airplanes and land vehicles of 10 nations were tested and coordination of the Coalition-level response.

For Leonardo, the systems developments on board Nave Marceglia, the eighth FREMM Class frigate (European Multi-Mission Frigate) of the Italian Navy, were tested. Capable of locating, classifying and tracking ballistic threats with extreme precision within a radius of 250 km, the Kronos MFRA (Multi-Function Radar Active) 3D radar, in an experimental configuration, has been shown to be able to follow the target since the initial phase, in which the ballistic missile reaches speeds in excess of 1.800 m / s and accelerations beyond 6G, and then maintains tracking beyond 200 km of altitude and acquires the target.

Furthermore, the MDLP-EVO (Multi Data Link Processor) communication system for the exchange of tactical data and the friend / enemy identification device IFF (Identification Friend or Foe), updated to the NATO Mode 5 standard, capable of distinguish in the operational scenario the allied subjects from the "non-cooperating" ones.

The coordination of the air defense and anti-missile operations was ensured by the Combat Management System (CMS), the "brain" of the ship, which processes the data acquired by the various sensors of the ship and of the other units in the game, presenting in real time a tactical picture of the situation to support decisions and interventions at the Coalition level.

Positive results also for weapon systems, in particular for shots from the 76/62 Super Rapido with 76 mm DART guided ammunition, which confirm the wide spectrum of protection capabilities of this system, even from the most sophisticated threats, representing the technological frontier for naval artillery. Finally, the launches with ASTER 30 by MBDA, a European consortium in which Leonardo has a 25% stake, have also proved their technological effectiveness and protection from missiles and targets.

Drones to transport drugs, plasma, organs and medical devices. Lazio is one of the first Italian regions to ...
52
Read

On the occasion of the twenty-year operational anniversary of the Joint Organization for Cooperation in the field of Armaments (OCCAR ...
117
Read

Leonardo and Aeroporti di Roma announced, on the occasion of the World ATM Congress which has just ended in Madrid, ...
275
Read

PZL-Świdnik, the Polish company wholly owned by Leonardo, obtained from the Ministry of Defense of ...
971
Read

- A data-driven approach to design and manufacturing processes. This is the new model launched by ...
654
Read

The German armaments giant has formalized the offer to Leonardo for the acquisition of 49% of the shares ...
13233
Read