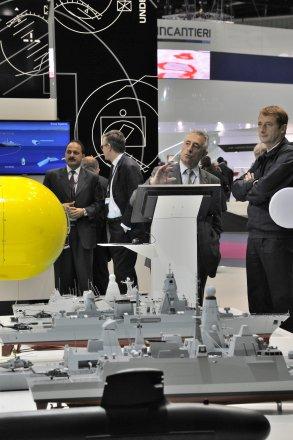 Finmeccanica, through its companies OTO Melara and WASS, participates in the Euronaval "International Naval Defense & Maritime Exhibition & Conference", the most important European naval armaments exhibition, which takes place from 27 to 31 October at the Le Bourget exhibition space. (Paris).

Finmeccanica supplies systems and equipment to numerous navies from countries around the world. In particular, the Group offers combat and command and control systems, integrated solutions (systems for coastal surveillance and ports, or for the protection and securing of areas of exclusive economic influence (EEZ), underwater surveillance and defense systems aerial) together with high-performance devices and sensors (radar, electro-optical sensors, communications).

The Italian-French collaboration programs Orizzonte and FREMM, as well as the international partnerships with the United Arab Emirates in the naval field, have affirmed the role of Finmeccanica as integrator of combat systems and supplier of flexible and multifunctional naval systems in line with the most modern requirements and suitable to seize opportunities on export markets. Orizzonte Sistemi Navali, the joint venture between Fincantieri and Finmeccanica-Selex ES, presents a product portfolio that ranges from boats for off-shore patrol operations to aircraft carriers. Through this joint venture, the Italian country system participates in the Italo-French project of the FREMM Multimission Frigates, of which the Italian Navy is one of the main customers. Recently, the collaboration between the two Groups was further strengthened by a collaboration agreement in the military shipbuilding sector with the aim of increasing competitiveness on domestic and foreign markets through a more effective and efficient integrated offer of the products of the two groups in naval area.

At Euronaval Finmeccanica OTO Melara presents the new HITROLE 20mm turret. It is a modern naval system, stabilized, electrically operated and controlled from a remote location, which can be equipped with 3 or 6 rotating barrels. The HITROLE 20 is ideal for maritime police operations and to deal with asymmetric threats. The solutions developed by Finmeccanica OTO Melara have achieved great international success, gaining the interest of the Marines of many countries that have chosen Finmeccanica products to equip their platforms. Among other things, it is precisely in France that Finmeccanica OTO Melara has established a consolidated presence in various programs, including the FREMM frigates.

Finmeccanica-WASS, world leader in underwater technology, presents at Euronaval the new Black Arrow light torpedo, developed jointly with the Italian Navy, unique in the world in terms of flexibility, performance and reduced life-cycle cost. Designed to be launched from any platform, including underwater ones, the Black Arrow is able to attack underwater and surface targets with lethal and non-lethal attack types (mission interruption) and is powered by a new rechargeable lithium-polymer battery . The new Black Scorpion light minisilide and the Black Shark heavy torpedo will also be on display. The Morpheus system will also be presented, which integrates the functions of the Black Snake towed curtain and the countermeasures produced by WASS through a command and control console. Finally, for the civilian market, will be on display the Unmanned Underwater Vehicle, V-FIDES, a development initiative for a new flexible unmanned underwater system that allows multiple uses also in the civil field and in the oil and gas sector.