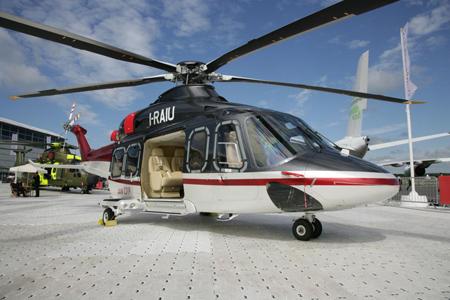 Finmeccanica-AgustaWestland has signed a contract with the Chinese group Beijing Automotive Industrial Corporation (BAIC) for the supply of 50 helicopters of various models that will be destined to public utility tasks.

The contract, signed today in Rome by Mauro Moretti, managing director and general manager of Finmeccanica, and by Xu Heyi, president of BGAC (Beijing General Aviation Co), a subsidiary of BAIC, has a value of approximately 400 million.

The agreement, signed in the presence of the president of the Italian council, Matteo Renzi, and the Chinese prime minister, Li Keqiang, lays the foundations for the creation of a strategic partnership between Finmeccanica-AgustaWestland and BAIC that will, in the future, also cover activities of on-site support, aircraft training and customization. The contract, which includes training, spare parts and technical support, does not include any configurations required by end customers.

"The agreement with BAIC - declared Mauro Moretti - confirms the constant growth of Finmeccanica - AgustaWestland in the Chinese helicopter market, with over 70 helicopters sold in the last 12 months which are added to the over 60 already purchased by numerous Chinese customers for transport needs passengers, fire, helicopter and public safety missions. The contract represents a further testimony of international competitiveness and the high technological levels of Finmeccanica-AgustaWestland, especially in a market, such as the Chinese one, in strong growth and increasingly at the center of the interests of the major operators in the sector ". Among the major Chinese state-owned automotive groups, BAIC is active in the aviation sector through its subsidiary Beijing General Aviation Co. Ltd. (BGAC) and, in the 2013, recorded a turnover of 43,3 billion US dollars.

The launch of the Multipurpose Offshore Patrol Vessel (PPA) "...
4149
Read

It took place on Tuesday 22 November at the Rome headquarters of Rheinmetall Italia, belonging to the Rheinmetall AG Group and...
1315
Read

– The US Air National Guard (ANG) has issued an Deployment Recommendation for the active “expendable” countermeasure...
9503
Read